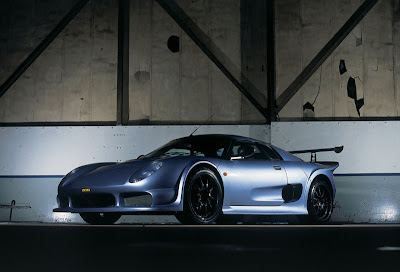 Anyone who has driven a Noble M12 on a race circuit attest to the car's polished handling, user-friendly nature and - of course - its vivid performance. But there's an irony here, because the M12 was always designed as a comfortable and breathtakingly fast road car first, with track-day competence thrown in as a bonus.

This has led Noble Automotive to develop the M400, a car that takes full advantage of the scope left in the M12's chassis and engine for drivers who seek even more focus in their performance and dynamics. With a power to weight ratio of 400bhp per tonne (hence the name), the M400 is not only substantially more powerful than the other cars in the M12 range, but it also showcases a variety of unique features not seen in other Nobles.

At £55,995, the M400 is not only one of the fastest production cars of its type, but its chassis - which in standard M12 form uniquely marries high-speed composure with low-speed ride compliance - has now been sharpened to give the driver even greater control of the car at speed.

But none of this has been achieved at the expense of the M400's road manners. Thanks to completely new, highly sophisticated dampers, the M400 has lost little of the M12's ride quality, which means that it is still as usable as any other M12 on the public road. Make no mistake, the M400 is so much more than just a 'track-day special'.

Internally, the engine has been modified with higher-lift cams and forged, rather than cast pistons, for extra strength. The forged pistons have been included as a safety feature for the engine, rather than out of necessity: in fact, the development car that spawned the M400 has covered many thousands of reliable miles on cast pistons with an even higher output than the production M400. Add to this the usual tuning recipe that goes into each and every Noble engine, and owners can be assured of plenty of durable high-performance.

The M400 retains the twin-turbocharged arrangement of the standard GTO-3 and 3R models, but now has a brace of larger Garrett T28 turbochargers, which produce maximum boost at 0.85bar, replacing the standard cars' T25s. A revised fuel pump and larger injectors cater for the M400's improved performance.

Working with leading automotive engineers, Roush Technologies, Noble has developed a bespoke engine map for the M400, which makes full use of the power and torque available in the mid- to top-end of the rev-range, allowing the 3.0-litre V6 to pull strongly right up to its 7200rpm limiter. The maximum 425bhp of power is now produced at 6500rpm (300rpm up on other models) and the maximum 390lb ft of torque at 5000rpm, with 75 per cent of this figure available from just 3500rpm.

Since Noble expects a majority of M400 owners to drive or compete with their cars on race circuits, it has also incorporated the following as standard:
+ Air-cooled oil cooler
+ Enlarged side air-scoops for improved engine bay cooling
+ Enlarged front air-intakes to allow a greater volume of air into the radiator
+ A single, dual-function oil pressure/oil temperature gauge, located next to the turbo-boost gauge on the dash-centre (the location of the pre-production press car's gauge differs slightly)
+ A baffled 'track-day' oil sump with larger, 8.5-litre capacity, which is a cost option on other Noble models.

Completing the drivetrain upgrades is a completely new gearshift mechanism for the six-speed manual gearbox, which uses low-maintenance, dry-running polymer bearings. The gearlever is now mounted slightly higher in the cabin and moves through a far quicker and more precise gate than before, making committed driving on circuit or road a pleasure.

Noble has targeted three key areas while developing the M400's chassis:
1. To improve levels of grip at high speeds without losing the inherently progressive breakaway characteristics for which the standard 3R is renowned;
2. To build in even greater degrees of body composure as the car approaches its limits, making it more predictable and controllable on the road and track;
3. To closely approach the on-road ride quality of the standard M12.

The dampers are monotube units, featuring an impact-extruded aluminium body to minimise weight, and have 45mm sintered pistons and 14mm shafts, incorporating a proprietary low friction-sealing system to optimise performance. Damping levels are fixed, though a threaded external body does allow the M400's ride height to be adjusted, if required. As with all Nobles, double wishbones are fitted all round.

Complementing the Dynamics dampers is a revised steering rack, which allows a further 0.8 of a turn between locks, while retaining the same ratio found on other Nobles (to make this possible, the footwell has been re-designed and is now double-skinned, adding further strength to the car's structure). There are now 2.5 turns from lock to lock (standard M12: 1.7 turns) which gives drivers potentially more control if the car is oversteering on a track. Naturally, this revision has also allowed improved manoeuvrability at lower speeds.

All Nobles are famed for their phenomenal roadholding, but the M400 raises the bar even higher. Replacing the M12 model's Bridgestone SO-3 tyres, are Pirelli P-Zero Corsas of identical size. The Pirellis are directional and asymmetric in design and their softer compound offers increased levels of grip and steering feel. The M400's high-speed control has also been enhanced by the Pirelli's stronger sidewalls, which have a high resistance to flex under extreme cornering forces.

The M400 is the first Noble production car to use an anti-roll bar (ARB), which is fitted to the front suspension only. Designed in-house, the ARB weighs just 6kgs, thanks to hollow components which have been laser-cut and CNC-machined. While no road-going Noble has ever been fitted with an ARB before, Martin Short's Rollcentre team is currently using the factory-designed system on its GT Cup Noble M12 this season, and is convinced of its worth under race conditions.

In order to arrive at the M400's 400bhp per tonne power to weight ratio, Noble has managed to shave 20kgs from the M12's already slender kerbweight by removing the air conditioning pump and its assorted plumbing. While air conditioning is a cost option on the standard 3R model, no cars have left the factory without it, hence its inclusion in the 3R's kerbweight figure. However, Noble anticipates that M400 owners will be more likely to forgo this feature in favour of a superior power to weight ratio. Air conditioning will remain a cost option on the M400.

Brakes are 330mm diameter discs all round, with four-pot callipers, taken from the current M12 range. The M400 adds a revised pressure control valve, which sends more bias to the rear brakes.

In keeping with the M400's 'race-car meets road-car' remit, all models  trimmed throughout in high-quality black Alcantara and fitted with all-new Sparco race seats. The seats themselves are trimmed in a hardwearing black jaquard fabric, and fitted with an anti-slip cushion, as well as removable backrest and under-thigh pads. Both seats are fore and aft adjustable, and can be tilted backwards and forwards for maximum comfort. As with all Nobles, the steering column can also be adjusted for reach.

Bearing in mind that the M400  popular among circuit drivers, Noble has moved both seats in towards the centre of the car by 15mm to allow more headroom at the side of, and above, occupants' heads, especially if they're wearing crash helmets. This re-positioning has also removed the slight pedal offset found in standard M12s. All M400s come as standard with four-point race harnesses, as well as a conventional inertia-reel safety belt for road use.

While the basic dash architecture be familiar to current M12 owners, the M400's cabin also receives a combined oil temperature and pressure gauge incorporated into the central switch-panel and 'M400' badging on the steering wheel boss.

The M400 is instantly identifiable from the outside by its black or red (depending upon body colour) graphics running along each door, and its anthracite-coloured wheels and rear-wing supports. No other Noble goes like it - or looks like it.

'M400' badging adorns the rear panel and the car is also defined visually by larger air-scoops at the side and the front (see Engine & Drivetrain).