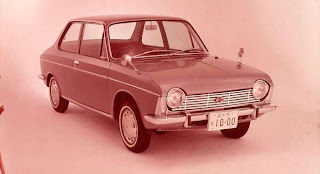 These cars featured a unique water-cooled, horizontally opposed four cylinder engine, with overhead valves operated by pushrods. It is thought that the engine was inspired by those used in the German Hansa-Goliath cars that had gone out of production a few years ealier, but it is not certain whether or not Subaru engineers actually used the design as a reference. Modern Subarus still make use of horizontally opposed four cylinder engines, albeit of a much greater capacity and with more modern overhead cam driven valves.

As was typical of early front wheel drive cars, the 1000 featured inboard drum brakes up front (but atypically Subaru would retain this unusual design into the seventies). Other unique features of the 1000 were a lack of a heater core, the heating system took its warmth directly from the radiator, and a hybrid suspension system that used torsion bars in combination with coil springs (much like the front suspension of the Subaru 360). The 1000 was superseded by the 1100 (also known as the Star in the United States and in other export markets) at the start of the seventies.
Posted by classic automotives at 6:22 AM 0 comments

Email ThisBlogThis!Share to TwitterShare to FacebookShare to Pinterest
Labels: 1965, Subaru

The Subaru 360 was the first automobile mass produced by Fuji Heavy Industries' Subaru division. The 360 was produced from 1958 to 1971.

The 360 featured an air-cooled, 2-stroke 356 cc engine mounted transversely at the rear. The engine was designed with a capacity of less than 360 cc so that the Subaru 360 would qualify for Japan's keicar class. The body was of monocoque construction and featured a fiberglass roof panel, which was considered very advanced in 1958.

When introduced in 1958, the 360's engine turned out 16 hp and Subaru claimed 66 mpg fuel economy; by the end of production, power had increased to 25 hp with a 36 hp twin-carbureted engine as an option.

Several variants were produced, including a station wagon (called the Custom), a convertible, and two sport models known as the Young S, which had a slightly upgraded engine, bucket seats and a tachometer along with a black, white striped roof with a dent along the middle to put one's surfboard. The Young SS, which had dual carburetors and chrome bores, produced 36 hp (27 kW). From 1961 onwards, a truck and van called the Sambar were also produced using the 360's engine. Many small businesses became very successful thanks to the pickup's small size for tight streets, quickness, ease to drive and great fuel economy.

The 360 was imported to the United States by Malcolm Bricklin, but the Subaru 360 received notoriety in 1969, when Consumer Reports magazine branded the automobile "Not Acceptable" (because of safety concerns and lack of power), and sales collapsed. There were various rumors of Subaru 360s being tossed overboard or being shredded to pieces. It was also reported that many 360s sat on dealers' lots for two or three years without ever being purchased.

The Subaru 360 was replaced by the less popular but more advanced R-2 which was quickly superseded by the long-lived Subaru Rex model.
Posted by classic automotives at 6:18 AM 0 comments