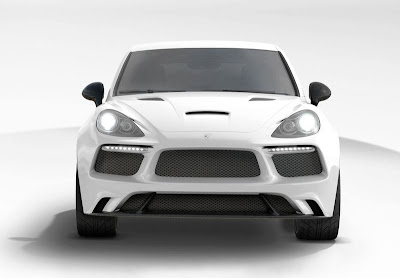 Eterniti Motors, a new luxury carmaker, makes its public debut at the 2011 Frankfurt IAA, the world's largest automotive motor show, and is previewing a prototype of its first product, the Eterniti Hemera.

Brand Launch and Hemera Preview
When launched in 2012 the Eterniti Hemera become the world's first Super-SUV, providing new levels of luxury, exclusivity and performance in an SUV to create a new niche. The body of the car shown at Frankfurt closely reflects the final production version, although that will have bespoke Eterniti LED headlamps and lenses. All panels are new and made of carbon composite. The interior, which will be almost 100% unique to Eterniti, is in the final stages of prototype testing and will be revealed later in the year.

The Eterniti is backed by a group of international investors and is an independent, boutique British marque, uniquely based in London, where it is establishing a hub with not only a showroom but an atelier and a build facility where bespoke vehicles can be created and hand-built on-site to any specification required. The facilities will be completed later this year, followed by further Eterniti-owned showrooms from 2012 in key overseas markets.

The business aims to help satisfy a growing demand for additional luxury and personalised specifications among wealthy car buyers, particularly in major cities, global wealth centres and emerging markets ranging from London to the Asia-Pacific region.

The company's debut vehicle will be a first step towards becoming a fully-fledged carmaker but will fully reflect the bespoke luxury objective. The Eterniti Hemera will be the first product in a space which Bentley, Maserati and Aston Martin, with the Lagonda brand, have identified for future product. It will be based on the most dynamic version of VW Group's latest-generation large SUV platform, the best in the industry. At Eterniti it will undergo a complete chassis-up rebuild, including a new, re-packaged interior, and the light-weight carbon-composite re-skin. It will also have additional engine performance, with the 4.8-litre twin-turbo V8 engine producing over 620bhp for a top speed in excess of 180mph.

The Eterniti Hemera will feature a limousine-like rear cabin, including twin electrically-reclining rear seats with heating and cooling, twin iPads with wireless keyboards, and a drinks chiller. This satisfies a specific - and currently unmet - need, particularly in Asian markets, for a car suitable for being chauffeured in as well as driving. Unlike a conventional limousine, an SUV's relatively compact footprint and wheelbase allow it to offer excellent handling and driver appeal, and the ride height and ruggedness are suitable for poor road surfaces which can make limousines and conventional high-performance cars impractical.

Production will start early in 2012, with deliveries by the summer. Prices have yet to be confirmed, but will be around £150,000 for the standard vehicle. Buyers will receive a full, three-year warranty. Warranty and servicing work will be carried out on-site in London, with collect-and-return and supplemented by a 'flying doctor' service. Customers will have access to finance and insurance depending on the market.

People
Although Eterniti is basing its business case around meeting market needs, its people have a passion for cars. The team has extensive experience in retailing some of the most prestigious British and European luxury and high-performance car brands, including Aston Martin, Porsche, Bentley and Ferrari, in markets from the UK to Asia-Pacific. It has further experience in motor sport.

The engineering team is led by Alastair Macqueen, who was responsible for the development of the Jaguar XJ220 supercar to production and has won the Le Mans 24-Hour race three times, with both Jaguar and Bentley. Eterniti also has its own F1 driver, Johnny Herbert, like Macqueen victorious at Le Mans but in addition a winner of three Grands Prix during a ten-year Formula 1 career, including one for the British Stewart team. Johnny will have an active involvement in developing Eterniti vehicles as well as serving as an ambassador for the brand. Alastair and Johnny have a long association, having both graduated from the Eddie Jordan stable and then competed together at Bentley. The trim operation is headed by one of the luxury car industry's leading interior trim specialists, who has worked closely with marques including Bentley.

Future
Eterniti has a long-term plan. It will be opening an Asia-Pacific hub in Hong Kong in 2012, and showrooms in Tokyo and Taipei are scheduled to open by the end of the year. Representation in China will be established from 2013. The product plan includes a second Hemera derivative for 2012. Plans for another SUV and a high-performance car which could form the basis of a racing programme are currently being developed.
Posted by classic automotives at 1:34 AM 0 comments