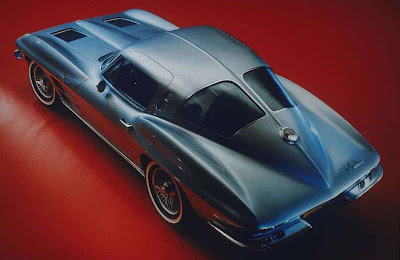 The Chevrolet Corvette C2 is a sports car designed by Larry Shinoda under the styling direction of Bill Mitchell, and produced between 1963 and 1967. It is the second generation or mid-year Chevrolet Corvette built and marketed by Chevrolet.

1963 would see the introduction of the new Corvette Sting Ray coupé with its distinctive split rear window and fake hood vents as well as an independent rear suspension. The split rear window was discontinued in 1964 due to safety concerns. Because they made the design too busy, the hood vents were also cut. Power for 1963 was at 365 hp (272 kW) hitting 375 hp (280 kW) in 1964.

The 1965 introduction of the 425HP 396 c.i. big block was ultimately the harbinger of doom for the Rochester Fuel injection system. The 396 425HP option cost $145. The 327-370HP Fuelie option cost $500. Few people could justify spending $355 more, for 55 hp less. When less than a thousand fuelie cars were built in 1965, Chevy stopped the program. It was indeed short sighted. Chevy was way ahead of its time and had they continued every car that says Lucas or Bosch Fuel injection now, may have said Rochester. As of this writing GM does not make any carburated cars.

In 2004, Sports Car International named the Stingray number five on the list of Top Sports Cars of the 1960s.
The design of this generation had several inspirations. The first was the contemporary Jaguar E-Type, of which Mitchell owned one and enjoyed driving it frequently. Bill Mitchell also sponsored a car known as the "Mitchell Sting Ray" in 1959, because Chevrolet no longer participated in factory racing. This vehicle had the largest impact on the styling of this generation, although it had no top and didn't give away what the coupe would look like. The third inspiration was a mako shark that Mitchell caught while deep-sea fishing.
Posted by classic automotives at 3:12 AM 0 comments

Email ThisBlogThis!Share to TwitterShare to FacebookShare to Pinterest
Labels: 1963, Chevrolet 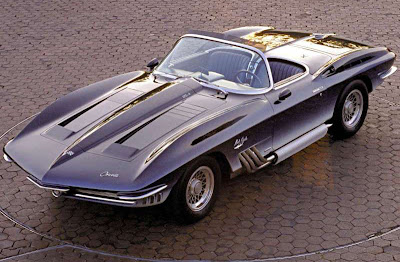 The XP-755 Mako Shark show car was designed by Larry Shinoda under the direction of GM Design head Bill Mitchell in 1961, as a concept for future Chevrolet Corvettes. In keeping with the name, the streamlining, pointed snout, and other detailing was partly inspired by the look of that very fast fish. The "Mako Shark" was very similar to the 1963 Corvette, with some alterations. These included adding two more brake lights in the rear (six total), making the nose of the car longer and more pointed, creating a clear glass roof with a periscope-like rear-view mirror, and remodeling the interior.

A widespread story has it that Mitchell had an actual shortfin mako shark mounted on the wall in his office, and ordered his team to paint the car to match the distinctive blue-gray upper surface gently blending into white underside of the fish. After numerous attempts to match the fish's color scheme failed, the team hit upon the idea of kidnapping the fish one night, painting it to match their best efforts on the car, and returning it to the office. Mitchell never realized the difference and pronounced himself pleased with the team's duplication on the car of nature's handiwork.
Posted by classic automotives at 3:10 AM 0 comments

Email ThisBlogThis!Share to TwitterShare to FacebookShare to Pinterest
Labels: 1961, Chevrolet 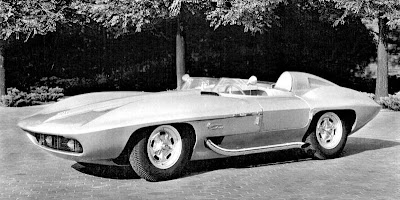 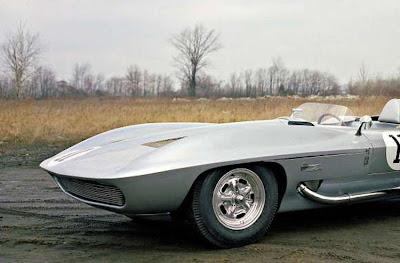