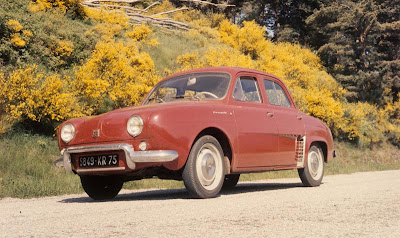 The Renault Dauphine was an automobile produced by the French manufacturer Renault from 1956 to 1962. A luxury version, badged as the Renault Ondine was sold from 1960 to 1962.

The Dauphine was launched in 1956 to replace the highly successful Renault 4CV. Like the 4CV, the Dauphine used a single-shell monocoque body. It was a four-door sedan design as was the 4CV (but it lacked the rear-hinged "suicide doors" of the 4CV). It was also heavier and 12 inches longer than its predecessor, but used the same engine, albeit a version increased in size and power from 760 cc to 845 cc and 19 hp to 32 hp (14 to 24 kW) (the Dauphine was infamously slow: Road & Track magazine measured the Dauphine's 0-60 mph acceleration time as 32 seconds). The Dauphine was originally intended to be called the Corvette, but was changed to Dauphine (the female form of the French feudal title of Dauphin) to avoid confusion with the recently-launched Chevrolet Corvette.

2 limited editions of the Dauphine tuned to get more power from the engine were launched during its lifetime: firstly, Renault performance guru Amedee Gordini (who was to later produce high performance versions of the Renault 8, Renault 12 and Renault 15 among others) engineered a version of the Dauphine tuned to 37 hp (27.2 kW), which was sold as the Dauphine Gordini. Also, the final run of Dauphines, a limited edition of 1000 called the 1093, were similarly tuned to 55 hp (41 kW) and featured a twin barrel carburetor, rear track rods, five-speed manual transmission and tachometer, and had a top speed of 140 km/h. The 1093 was only available in white with two blue stripes down each side. A luxury version of the Dauphine called the Ondine was sold during the last two years of its prodution run.

A version of the Dauphine Gordini, called simply the Renault Gordini, was manufactured in Brazil under license by Willys-Overland.
Among the many aftermarket options available for the Dauphine were a supercharger designed by American company Judson Research & Mfg. Co, sold in 1958 for US$165, and designed to be installed in about two hours without any chassis or body modifications.

The Dauphine's legacy is somewhat dominated by both its infamously poor performance as well as its poor reliability: in many markets (particularly the United States and the United Kingdom) the car became notorious for mechanical problems and rust issues. In 2002, the auto enthusiasts' website Car Talk voted the Dauphine the 9th Worst Car Of The Millennium, calling it "truly unencumbered by the engineering process". Nevertheless, it remains popular as an antique/classic car, particularly in Europe.
Posted by classic automotives at 3:45 AM 0 comments