The original VW Passat was launched in 1973. The body types offered originally were 2- and 4-door sedans and similar looking three- and five-door versions. Externally all four shared a modern fastback style design, styled by the Italian designer Giorgetto Giugiaro). All the versions sharing the same external design was unusual, since two of the models were traditional sedans with a separate trunk. A five-door station wagon was introduced in 1974. Passat was effectively a less expensive version of the Audi 80 (Fox) sedan which had been introduced a year earlier and which had a more conservative body style, so that the Audi and Volkswagen models had distinct body styles and image. In Europe, Passat was equipped with hexagonal or single round or double round headlights depending on specification.

In North America, the car was called the Dasher, and was only available with round DOT-spec lights. The three-door hatchback model was launched in North America in 1975.

VW Passat was one of the most modern European family cars at the time, and was intended as a replacement for the ageing Volkswagen Type 3, and as a contemporary rival for popular Ford Taunus/Cortina) and Opel Ascona/Vauxhall Cavalier. The Passat was Wheels magazine's Car of the Year for 1974 and its sister model Audi 80 was nominated car of the year by the European motor press a year earlier. The platform was named B1.

The Passat used the 4 cylinder OHC 1.3 L, 1.5 L, and 1.6 L petrol engines, also used in the Audi 80—longitudinally mounted with front wheel drive, in Audi tradition, with either a 4-speed manual transmission or 3-speed automatic. It had a MacPherson strut front suspension with a solid axle/coil spring setup in back.

The whole range received a facelift in 1977 (launched 1978 outside Europe), featuring an interior upgrade and subtly revised styling including repositioned indicators and quad (round) headlights on all models. This generation was sold in Brazil well into the 1980s and extensively exported to Iraq, where many are still on the road. It was also assembled in Nigeria.
Posted by classic automotives at 6:06 AM 0 comments 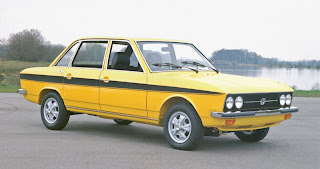 The Volkswagen K70 (pronounced as "ka siebzig" in German) is a sedan automobile produced by both NSU and Volkswagen from 1969 to 1974. The K70 was the first VW to have a front-mounted watercooled engine.

The K70 was originally developed by NSU as a smaller brother to the more famous Ro 80, the main difference being that the K70 used a conventional piston engine instead of the Ro80's more complicated Wankel rotary engine. The name "K70" referred to the fact that the engine had a power output of 70 hp (52 kW), the "K" denoting the German word "Kolben", meaning Piston.

In 1969, as the car was about to be launched, NSU was taken over by Volkswagen, who integrated the Neckarsulm company with Auto-Union/Audi, which it had acquired in 1964. VW was in desperate need for a new family sedan to replace the unsuccessful Type 4, which itself was intended to replace the Beetle. Thinking that the K70, featuring front wheel drive and modern styling, was the perfect way to transform its image, the Wolfsburg firm quickly scrapped publicity material showing the K70 badged as an NSU, and instead put it into production as a Volkswagen.

Despite the different badging, buyers tarred the K70 with the same brush as its unreliable Ro 80 sister car, leading to poor sales. The K70 also became notorious for serious corrosion problems, and very few have survived as a result. It was replaced in 1973 by the Audi-based Volkswagen Passat.
Posted by classic automotives at 6:01 AM 0 comments