Built at the request of race teams, such as those owned by Ray Bellm and Thomas Bscher, in order to compete in the BPR Global GT Series, the McLaren F1 GTR was a custom built race car which introduced a modified engine management system that increased power output — however, air-restrictors mandated by racing regulations reduced the power back to 600 hp (447 kW) at 7500 RPM. The cars extensive modifications included changes to body panels, suspension, aerodynamics and the interior. The McLaren F1 GTR would go on to take its greatest achievement with 1st, 3rd, 4th, 5th, and 13th places in the 1995 24 Hours of Le Mans, beating out custom built prototype sports cars.

McLaren F1 GTR '96
To follow up on the success of the McLaren F1 GTR into 1996, McLaren further developed the '95 model, leading to a size increase but weight decrease. Nine more F1 GTRs were built to 1996 spec, while some 1995 cars were still campaigned by privateers. McLaren F1 GTR '96 chassis #14R is notable as being the first non-Japanese car to win a race in the All-Japan Grand Touring Car Championship (JGTC). The car was driven by David Brabham and John Nielsen. The weight was reduced with around 100 kg from the 1995 GTR edition and the engine was kept detuned at 600 HP to comply with racing regulations.

McLaren F1 GTR '97
With the F1 GT homologated, McLaren could now develop the McLaren F1 GTR for the 1997 season. Weight was further reduced and a sequential transaxle was added. The engine was slightly destroked to 6.0L instead of the previous 6.1L. Due to the heavily modified bodywork, the McLaren F1 GTR '97 is often referred to as the "Longtail" thanks to the rear bodywork being extended to increase rear downforce. A total of ten McLaren F1 GTR '97s were built. The weight was reduced to a total of 910 kg.
Posted by classic automotives at 1:39 AM 0 comments

Email ThisBlogThis!Share to TwitterShare to FacebookShare to Pinterest
Labels: 1995, McLaren

The car features numerous proprietary designs and technologies. It is lighter and has a more streamlined structure than even most of its modern rivals and competitors despite having one seat more than most similar sports cars, with the driver's seat located in the middle. It features a powerful engine and is somewhat track oriented, but not to the degree that it compromises everyday usability and comfort. It was conceived as an exercise in creating what its designers hoped would be considered the ultimate road car. Despite not having been designed as a track machine, a modified race car edition of the vehicle won several races, including the 24 Hours of Le Mans in 1995, where it faced purpose-built prototype race cars. Production began in 1992 and ended in 1998. In all, 106 cars were manufactured, with some variations in the design.

The idea was first conceived when Murray was waiting for a flight home from the fateful Italian Grand Prix in 1988; Murray drew a sketch of a three seater sports car and proposed it to Ron Dennis, pitched as the idea of creating the ultimate road car, a concept that would be heavily influenced by the Formula One experience and technology of the company and thus reflect that skill and knowledge through the McLaren F1.

The car was first unveiled at a launch show, 28 May 1991, at The Sporting Club in Monaco. The production version remained the same as the original prototype (XP1) except for the wing mirror which, on the XP1, was mounted at the top of the A-pillar. This car was deemed not road legal as it had no indicators at the front; McLaren was forced to make changes on the car as a result (some cars, including Ralph Lauren's, were sent back to McLaren and fitted with the prototype mirrors). The original wing mirrors also incorporated a pair of indicators which other car manufacturers would adopt several years later.

Engine
Gordon Murray insisted that the engine for this car be naturally aspirated to increase reliability and driver control. Turbochargers and superchargers increase power but they increase complexity and can decrease reliability as well as introducing an additional aspect of latency and loss of feedback, the ability of the driver to maintain maximum control of the engine is thus decreased. Murray initially approached Honda for an NA powerplant with 550 bhp (410 kW; 560 PS), 600 mm (23.6 in) block length and a total weight of 250 kg (551 lb), it should be derived from the Formula One powerplant in the then-dominating McLaren/Honda cars.

Chassis and body
The McLaren F1 was the first production road car to use a complete carbon fiber reinforced plastic (CFRP) monocoque chassis structure. Aluminium and magnesium was used for attachment points for the suspension system, inserted directly into the CFRP.

The car features a central driving position - the driver's seat is located in the middle, ahead of the fuel tank and ahead of the engine, with a passenger seat slightly behind and on either side. The doors on the vehicle move up and out when opened, and are thus of the type butterfly doors.

Aerodynamics
The overall drag coefficient on the standard McLaren F1 is 0.32, compared with 0.36 for the faster Bugatti Veyron, and 0.357 for the current holder of the fastest car world record (as of 2008) - the SSC Ultimate Aero TT (in terms of top speed). The vehicle's frontal area is 1.79 square meters and the total Cx is 0.57. Due to the fact that the machine features active aerodynamics these are the figures presented in the most streamlined configuration.

The normal McLaren F1 features no wings to produce downforce (compare the LM and GTR editions), however the overall design of the underbody of the McLaren F1 in addition to a rear diffuser exploits ground effect to improve downforce which is increased through the use of two electric fans to further decrease the pressure under the car. A "high downforce mode" can be turned on and off by the driver. At the top of the vehicle there is an air intake to direct high pressure air to the engine with a low pressure exit point at the top of the very rear. Under each door is a small air intake to provide cooling for the oil tank and some of the electronics. The airflow created by the electric fans not only increase downforce, but the airflow that is created is further exploited through design, by being directed through the engine bay to provide additional cooling for the engine and the ECU. At the front, there are ducts assisted by an electric suction fan for cooling of the front brakes.

There is a small rear spoiler on the tail of the vehicle, which is dynamic, the device will adjust dynamically and automatically attempt to balance the center of gravity of the car under braking - which will be shifted forward when the brakes are applied. Upon activation of the spoiler a high pressure zone is obviously created in front of the flap, this high pressure zone is exploited—two air intakes are revealed upon application that will allow the high pressure airflow to enter ducts that route air to aid in cooling the rear brakes. The spoiler increases the overall drag coefficient from 0.32 to 0.39 and is activated at speeds equal to or above 40 mph (64 km/h) by brake line pressure.

Posted by classic automotives at 1:37 AM 0 comments

Email ThisBlogThis!Share to TwitterShare to FacebookShare to Pinterest
Labels: 1993, McLaren 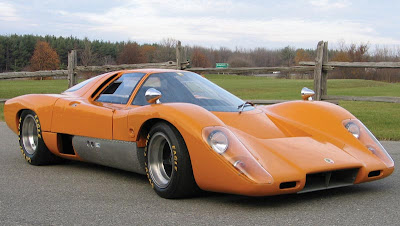 The M6 name was later used in the development of a closed-cockpit sports car for the 24 Hours of Le Mans and known as the M6GT. The company's plan to homologate it for the FIA's Group 4 regulations was however never completed, and only a few M6GT prototypes were finished by McLaren and Trojan. Two M6GTs were later converted to road cars, one of which became Bruce McLaren's personal transport.

Development
Bruce McLaren gathered several designers to develop the McLaren M6A during the off-season in early 1967. Along with McLaren himself, Robin Herd, Gordon Coppuck, Tyler Alexander, and Don Beresford all worked on the layout of the McLaren M6A's chassis and bodywork. The car featured the first monocoque chassis constructed by McLaren, while the bodywork was specifically shaped to increase downforce suited for the Can-Am circuits. McLaren's team also expanded into engine development, creating a fuel injection system for their Chevrolet V8s. Another addition to the team was a new tire supplier, with Goodyear replacing Firestone in exchange for a testing and development program.

The first McLaren M6A was completed in spring 1967, and brought to the nearby Goodwood Circuit for testing. Bruce McLaren Motor Racing carried out over 2000 miles of testing at the circuit in preparation for the upcoming Can-Am season, tuning the car as well as gathering data for Goodyear's use. As two further McLaren M6A were completed, the team shipped the cars to North America to prepare for the opening race of the season. A final addition to the cars was a coat of orange paint. This new McLaren Orange color scheme would eventually become synonymous with Bruce McLaren and the team.
The retirement of the McLaren M6A, McLaren entrusted Trojan with constructing duplicates which could be sold to customers. These M6Bs were nearly identical to the McLaren M6A but were sold without an engine. Several other M6Bs were also modified to fit closed-cockpit bodywork.

Racing history
The 1967 Can-Am season began in September at Road America. Bruce McLaren's M6A qualified on pole position with a new track record, while teammate Denny Hulme's car led once the race began. Although McLaren's car suffered an oil leak and failed to finish, Hulme was able to earn the car's first victory. The next two events had the team running away from the opposition, with Hulme and McLaren finishing first and second consecutively. The roles were however swapped over the next two races as it was McLaren who won on both occasions, but problems with Hulme's car allowed McLaren to take the lead in the points standings going into the final round. For the finale at the Stardust Grand Prix, problems with the Chevrolet motors led to blown engines and neither car reaching the finish. However, with their performance over the season, Bruce McLaren secured the 1967 Can-Am Challenge Cup, while Hulme was ranked second only three points behind.

As Bruce McLaren Motor Racing moved to developing the M8A, the M6Bs began to be delivered to customers for the 1968 season. Several of the McLaren M6A were also sold with Roger Penske purchasing one car for defending United States Road Racing Championship (USRRC) champion Mark Donohue. Donohue won several USRRC events that season and earned his second championship. Donohue also later won a race in Can-Am, beating the newer McLaren M8As. After the cancellation of the USRRC after 1968, the M6As and M6Bs continued to be used into the early 1970s but none were able to achieve victory against their newer competitors.
Posted by classic automotives at 1:33 AM 0 comments

Email ThisBlogThis!Share to TwitterShare to FacebookShare to Pinterest
Labels: 1969, McLaren

Highlights
The dramatically redesigned all-new 2004 TL features increased performance, even sportier handling and an assortment of class-leading technology. A new 3.2-liter engine delivers 270 horsepower and 238 lb-ft. of torque while lowering emissions and maintaining impressive fuel economy. The TL is now available with two transmissions, a 5-speed Sequential SportShift automatic and a new close-ratio 6-speed manual. Inside, an assortment of cutting edge electronics has been added to the TL's already impressive list of standard features. These include the first automotive application of DVD-Audio 5.1 surround sound as well as HandsFreeLink' wireless phone connectivity and XM" Satellite Radio, making the 2004 TL one of the most comprehensively equipped performance luxury sedans available. Highlights for the 2004 TL include: