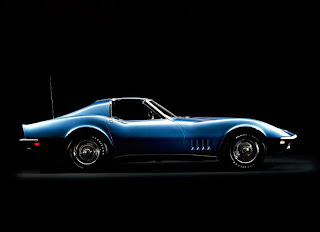 The generation has the distinction of being introduced to the motoring public in an unorthodox — and unintended — fashion. 1968 marked the introduction of Mattel's now-famous Hot Wheels line of 1/64-scale die cast toy cars. General Motors had tried their best to keep the appearance of the upcoming car a secret, but the release of the Hot Wheels line several weeks before the Corvette's unveiling had a certain version of particular interest to Corvette fans: the "Custom Corvette", a GM-authorized model of the 1968 Corvette.

Email ThisBlogThis!Share to TwitterShare to FacebookShare to Pinterest
Labels: 1968, Chevrolet

The Chevrolet Camaro was introduced in North America by the Chevrolet Motor Division of General Motors at the start of the 1967 model year as competition for the Ford Mustang. Camaro advertising would first be found on AM top-40 stations of the day - stations which appealed to young adults. Although it was technically a compact car (by the standards of the time), the Camaro, like the entire class of Mustang competitors, was soon known as a pony car. It may also be classified as an intermediate touring car, a sports car, or a muscle car. The car shared the same platform and major components with the Pontiac Firebird, also introduced in 1967. Production of both cars ceased in 2002 with only the Camaro going back into production in 2009.

Sharing some mechanicals with the upcoming 1968 Chevrolet Nova, the Camaro featured a unibody structure, combined with a sub-frame supporting the front end. Chevrolet offered the car in only two body styles, a coupe and convertible. Almost 80 factory and 40 dealer options including three main packages were available.
Chevrolet Camaro

The SS included a modified 5.7L (350) V8 engine (first engine of that size by Chevrolet), and the L35 396(6.5L) big-block V8 was also available. The SS featured non-functional air inlets on the hood, special striping and SS badging on the grille, gas cap, and horn button. It was possible to order both the SS and RS to receive a Camaro SS/RS. In 1967, a Camaro SS/RSS convertible with a 396(6.5L) engine paced the Indianapolis 500 race.

The 'Z/28' option code was introduced in December 1966 for the 1967 model year. This option package wasn't mentioned in any sales literature, so it was unknown to most buyers. The only way to order the Z/28 was to order a base Camaro with the Z28 option, front disc brakes, power steering and a Muncie 4-speed manual transmission. The Z/28 featured a unique 302(4.9L) small-block engine, designed specifically to race in the Trans Am racing series (which required engines smaller than 305(5.0L) and public availability of the car. Advertised power of this engine was listed at 290hp (216kW) while actual dynometer readings rated it at 360 to 400hp (269 to 298kW). The Z/28 also came with upgraded suspension and racing stripes on the hood. It was possible to combine the Z/28 package with the RS package. Only 602 Z/28s were sold in 1967. Contrary to popular belief, 1967 Z/28s did not have raised cowl induction hoods like 1969 Z/28s did. In 1967, the 1967 Z28 received air from a cowl plenum duct attached to the side of the air cleaner that ran to the firewall and got air from the cowl vents. The hood was a standard flat hood. 1967 Z/28s had 15 in. Rally wheels, while all other 1967 Camaros had 14 in. wheels. The Z/28 could be combined with the RS appearance package.

The Camaro's standard drivetrain was a 3.8L (230kW) Straight-6 engine rated at 140hp (104kW) and backed by a Saginaw three-speed manual transmission. A Muncie four-speed manual was also available. The two-speed "Powerglide" automatic transmission was a popular option in 1967 and 1968 until the three-speed "Turbo Hydra-Matic 350" replaced it starting in 1969. The TH350 was also an option on SS396 cars from late 1967 onwards.

Email ThisBlogThis!Share to TwitterShare to FacebookShare to Pinterest
Labels: 1967, Chevrolet 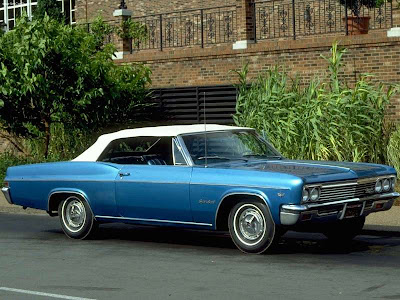 The Impala was introduced in 1958 as a new up-level, sporty trim package created for Bel Air coupes and convertibles. Unique to the model were its six taillights, which set it apart from lower trim levels with only two lights on a side. This classic styling cue would become its trademark. It was named for a southern African antelope. The Impala became a separate model in 1959 in both two and four-door versions and became the best selling car in the Chevy product line.
For 1960, it became the best-selling automobile in the United States and held that position for the next decade. From 1958 until 1996, Impala sales were in excess of 13 million units, more than any other full-size car in the history of the automobile. In 1965, the Impala set an all-time industry annual sales record of more than 1 million units, which has never been bettered.

In 1965, Chevrolet introduced the Impala Caprice. Beginning with the four-door hardtop sedan body, Impala Caprices received unique upholstery, wood grained accents on the dash board and specialty pulls on the insides of the doors. A one year model, the Impala Caprice was reintroduced as the Chevrolet Caprice in 1966, taking the top position in the Chevrolet lineup. The Impala however, remained Chevrolet's top-selling model until late 1970s. During the 1969 model year, for example, Impala production topped Caprice production by 611,000 units.

The 1971 redesign introduced the largest Impala. The Impala's chassis would not be this extensively changed again until the introduction of the 2000 Impala. The Impala would remain Chevrolet's best-selling model until 1977.

The Impala is often credited with starting the muscle car era, although the credit for that really goes to Pontiac when it released the GTO. In the 1960s, gasoline was cheap and consumer demand for power exceeded the need for efficiency. Buyers were clamoring for as much room, performance, amenities and quality as they could get for their dollars. Afraid it would lose out to an in house competition, Chevy released its muscle car, the SS, soon after. In 1961, the Impala SS (Super Sport) was introduced to the market. The SS badge was to become Chevrolet's signature of performance on many models, though it has often been an appearance package only. The Impala's SS package in 1961 was truly a performance package, beginning with the high-performance 348 in³ (5.7 L) engines (available with 305, 340, and 350 hp (230, 255 and 260 kW)) or the new 409 in³ (6.7 L), which was available with up to 425 hp. The package also inclued upgraded tires on station wagon wheels, springs, shocks and special sintered metallic brake linings. Starting in 1962, the Impala SS could be had with any engine available in the Impala, right down to the 235 in³ 135 hp inline-6. With one exception, from this point until 1969, the SS was an appearance package only, though the heavy-duty parts and big engines could still be ordered.

The exception was the Z24 option package available in combination with the standard Z03 Super Sport package. Starting in 1967, through 1969, buyers of Z24s Impalas got cars badged as "SS427" models. The SS427 included heavy duty suspension and other performance goodies, as well as a Turbo-Jet 427 in either L36 or L72 variations. Special SS427 badging inside and out were the rule, but few were sold, since "muscle car" enthusiasts were looking toward big-block intermediates like the Chevelle SS396 and Plymouth Hemi Roadrunners, which were lighter and subsequently faster off the line. Interestingly, Z24 cars could be ordered without the Z03 SS package, which meant SS427 equipment but no bucket seats or center console.