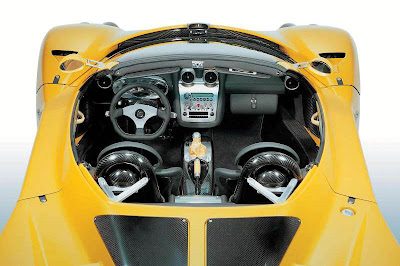 The Pagani Zonda is a supercar made by Italian car maker Pagani. It debuted in 1999 and continues through the present, with production proceeding at roughly 25 cars per year. As of December, 2005, 60 Zondas had been built. It is a mid-engined 2-seat coupe and convertible. Construction is mainly of carbon fiber.

Some early Zonda engineering was done by Formula One champion, Juan Manuel Fangio. The car was originally to be named for him, the "Fangio F1", but the name was changed upon his death in 1995.
The Zonda is often compared to other supercars such as the Enzo Ferrari, the Koenigsegg CCR, the Lamborghini Murcielago and the Porsche Carrera GT.

The C12 S features an elongated nose and flaps at the rear for improved aerodynamics. New light clusters and exhausts are also used. Fifteen 7.0 L C12 S cars were produced.

A roadster version is also built, with production limited by the company to 40 examples. As of 2005, nine roadsters had been built. According to Road & Track magazine, three more C12 S 7.3 cars had been built as of June, 2005, but it is unclear whether they were roadsters or coupes. Motor Trend reported that 60 Zondas of all types had been built in their January 2006 issue.

Zonda GR, 2003
Development of the Zonda GR started in December, 2002. At this stage the Zonda was nearly four years old, but had yet to be entered in major motorsports. Tom Weickardt, owner of American Viperacing, Toine Hezemans, owner of Carsport Holland, and Paul Kumpen, owner of GLPK, created a new company, Carsport Zonda, to build a racing version. They secured exclusive rights to develop, build and sell competition Zondas from Horacio Pagani, and the first GR was completed at Carsport's facility in Modena within months.

The Zonda GR is based on the Zonda C12 S. It was built on the same carbon fiber chassis, with tube frames in front and back. The bodywork was modified to include front and rear diffusers and louvers for improved aerodynamics. The car was 2 m (6.6 ft) wide, in accordance with the regulations of the FIA and ACO. The car's weight was reduced to 1100 kg (2425 lb), and a new suspension was designed. New wheels and brakes were also specified. The engine was equipped with an enlarged radiator, and the engine and gearbox also have new oil coolers.

C12 S Monza
The Zonda C12 S Monza debuted at the 2004 Paris Motor Show as a track-day version of the Zonda for private use. Borrowing its appearance cues from the Zonda GR, the Monza included many features which could also be applied to other Zonda models. A dry sump engine tuned to more than 600 PS (more than 440 kW) was used, and the cooling was improved. Modified aerodynamics, including a different wing and front diffuser, allowed greater speed, as did optimized gearing. The car was lighter, with polycarbonate side windows, and an unmuffled exhaust is fitted. The revised interior includes different pedals, steering wheel, and seats, as well as a reinforced roll cage. Larger brakes and a stiffer suspension also improve performance. Finally, an external fire extinguisher is included for safety.

Production of the Zonda F will be limited to 25 cars, still not US compatible. The next model, due to be unveiled in 2008, will be fully EPA/DOT compatible.

Zonda Roadster F
The Zonda Roadster F debuted at the 2006 Geneva show. It is similar to the coupe, but with a removable carbon fibre roof and canvas side curtains weighing just 11 lb (5 kg). Production of the Roadster F is suggested at 25 units.

The Roadster F is able to maintain chassis rigidity without any gain in curb weight by eschewing conventional thinking by not strengthening the sills - a process which would have needed more than 35kg of reinforcement. Pagani instead uses racecar thinking, materials and construction techniques, strengthening the firewall structure of the chassis tub together with billet alloy braces that connect the points where the roof rails would have joined. The windscreen is also strengthened for safety reasons. These techniques enable the Roadster to have virtually the same weight as the coupe - 1230kg.
Posted by classic automotives at 6:33 AM 0 comments

Email ThisBlogThis!Share to TwitterShare to FacebookShare to Pinterest
Labels: 2003, Pagani

Having conquered the specialist sports car market over the last five years, Noble Automotive is now launching an all-new model, which will firmly establish it at the quality end of the supercar market.
The British Noble M14 is set to take on rivals, such as the Porsche 911 Turbo and Ferrari 360 Modena, with a tantalising mix of class-leading dynamics, prodigious performance, a finely crafted and well equipped cabin, and levels of practicality that will appeal to owners who wish to use their car every day.
Priced at £74,950, the M14 will be the flagship of the Noble range, falling into place above the existing M12 models.

EXTERIOR DESIGN
The 2004 British Motor Show will see the Noble M14 unveiled for the first time. Far from being a mere concept, the show car's styling, interior, drivetrain and chassis represent what will reach production when the car goes on sale in October this year.

From the M14's conception, Lee Noble has focused on creating a form that eschews current design trends, and majors on a far more emotive shape, led by broad, sweeping curves along the car's flanks, an aggressive front treatment and a graceful - yet imposing - rear end.

This fact is obvious when you look more closely at the car: beautifully engineered door handles, hewn from billets of aluminium; six circular rear light lenses, which make reference to legendary supercars from the past; the rear screen, which reveals the engine's plenum chamber protruding above the perforated aluminium engine cover; and the body-coloured rear diffuser, which cuts deep into the rear panel, highlighting the twin exhausts which exit from its centre. Overall, 95 per cent of the components which make up the M14 (excluding the drivetrain) are distinct from the current M12 series of cars, and an additional 70 per cent of components are now made in house, compared with previous Noble models.

While the M14 retains the current M12's wheelbase, its length has grown by 178mm to 4267mm and its width by 50mm to 1935mm. As a result, more space has been liberated in the cabin, compared with the M12, and there are now two luggage compartments, one behind the engine, and one at the front of the car. This increase in size has also helped Noble incorporate significant crash protection in the doors, and deformable sections at the front and rear of the M14, with a view to it achieving full European Type Approval in the future.

Lee Noble's provenance as a designer of performance cars has been well-documented, and it's this experience which has ensured that the aerodynamics of the M14 will create exceptional stability, as well as an estimated top speed of 190mph.

DRIVETRAIN & PERFORMANCE
Noble has chosen again to adopt a highly-modified version of Ford's 3.0-litre V6, mated to a six-speed manual gearbox, for use in the M14. The unit, which in base form also powers certain Jaguar cars, has proved particularly durable in five years of Noble M12 development and production.

But crude benchmark figures tell only half the story. The Noble M14's power delivery has been fine-tuned to exploit much of the engine's potential with minimal effort. In-gear acceleration should be class-leading, with over 90 per cent of the engine's torque available at just 2750rpm. And in typical Noble style, the engine will be placid and tractable from as low as 1000rpm, highlighting the M14's versatility in every day driving conditions. A cultured exhaust note has been engineered to excite the senses under acceleration, but remain civilised at cruising speeds.

Twin intercoolers now feature in the M14, and are mounted behind each rear wheel arch. This location has two clear advantages: it creates vital space at the back of the car for a luggage compartment; and cooler air can now be ducted over each internal wheel arch cover, rather than above the engine, improving the efficiency of the intercoolers.

The ratios in the M14's six-speed gearbox have been designed to specifically match its power and torque characteristics, complementing the engine's linear delivery. In top gear the M14 pulls 26.5mph per 1000rpm, giving it a remarkably relaxed cruising gate, with 70mph registering just over 2600rpm. This gearbox, which is mated to an automatic torque-biasing differential, has received extensive development in Noble's even more powerful M400 model, and has proved exceptionally durable. A completely new gearshift mechanism, offering drivers slick, finger-light changes, completes the package.

Read more »
Posted by classic automotives at 6:28 AM 0 comments

Email ThisBlogThis!Share to TwitterShare to FacebookShare to Pinterest
Labels: 2004, Noble

DaimlerChrysler attempted to buy the Rolls-Royce/Bentley marque when Vickers offered the company up for sale. When this attempt failed (they were outbid by BMW and Volkswagen respectively) they introduced the Maybach as a direct challenger in 2002. Both models are variants of the same ultra-luxurious automobile. The model numbers reflect the respective lengths of the automobiles in decimetres; the 57 is more likely to be owner-driven while the longer 62 is designed with a chauffeur in mind. The engine is a Mercedes-sourced 5.5-liter twin-turbo V12, generating 550 hp. The prices range from US$305,000 to $357,000 (£240,000 to £250,000)—priced to directly compete with top-of-the-line Bentley and Rolls-Royce automobiles.

As of 2004, only 600 units had been sold. DaimlerChrysler projects that they may sell less than the 1,000 units expected. Just 152 Maybachs were sold in the United States in 2005, with worldwide production down to 300 units.

Posted by classic automotives at 6:25 AM 0 comments