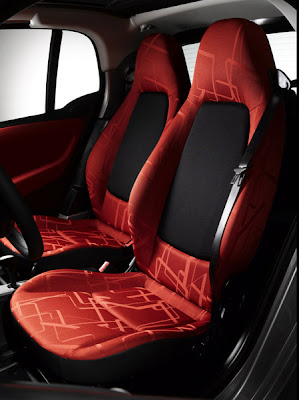 The design has been skilfully further developed and gives the new smart fortwo a fresh, more masculine appearance. And yet it retains its unmistakable character: you can always tell a smart fortwo at first sight - by its striking tridion safety cell that is also one of the main safety features, and by the innovative plastic bodypanels that are extremely practical into the bargain.

Engines: powerful, clean, economical
The smart fortwo  launched in April 2007 with reengineered uprated petrol engines. The three cylinder engine has capacity of one litre and delivers 45 kW, 52 kW or 62 kW (61 bhp, 71 bhp or 84 bhp). The engine power of the smart fortwo cdi has increased by ten percent and now stands at 33 kW (45 bhp).

All engines are linked to an automated manual five-speed transmission from Getrag that has also been reengineered. The petrol versions now have a maximum speed of 145 km/h - 10 km/h more than the predecessor model.

Still smart - inside and out
The dimensions have increased as against the first generation. The 19.5 centimetre increase in length benefits pedestrians, rear impact protection and especially ride comfort.

The luggage compartment can hold 220 litres - 70 litres more than before - and when loaded to the roof there is space for up to 340 litres (a further 80 litres). The new smart fortwo also features the familiar twin-section tailgate. The lower section can be used as a little platform and facilitates loading and unloading.

Like the exterior, it goes without saying that the interior of the smart fortwo remains truly smart. Typical smart characteristics include the external-mounted air vents and additional dials, the large, fabric-covered areas on doors and instrument panel, the safety seats with integral seat belts and last but not least the ignition lock behind the shift lever.

The observer immediately notices that the instrument panel is no longer curved in an S-shape towards the passenger side but is now straight. This is partly to comply with US crash regulations. Nevertheless - and perhaps because of this - the new smart fortwo offers a unique feeling of spaciousness.

Safety at the highest level
The high level of passive safety has been further improved. Internal crash tests have shown that the smart fortwo will be at the level of four EuroNCAP stars.

And that's not all: as the new smart fortwo  sold in the USA from 2008 it also complies with the strict American crash regulations.

Likewise, new regulations concerning pedestrian protection have been implemented in the front section. Furthermore, new head/thorax side airbags offering extensive protection in the event of a side crash are available as an option.

Exceedingly low consumption
The outstanding economy of the smart fortwo is underlined by further optimisations. Despite the greater engine power, the petrol versions consume less than five litres of fuel over 100 km.

The smart fortwo with a starter generator that  available from the end of 2007 and  based on the 52 kW petrol version, promises further savings of up to 13 percent in city traffic.

This has particular advantages when driving in urban areas and frequent stop-and-go traffic: the three-cylinder engine automatically switches off when the car stops at traffic lights, for example. It starts again as soon as the driver presses the accelerator pedal.

Alternative drives are also possible and the new smart fortwo has been designed to allow for quick implementation of natural gas or electric drive concepts - as soon as there is a demand for these new drive systems and they become economically viable.

Unique: the smart fortwo doesn't have to be stationary for this - the soft top can be opened and closed at any driving speed. Furthermore, the roof bars can be removed and stowed in a special compartment in the tailgate. The soft top offers further added comfort and safety with the heated rear window made of glass.

Extensive range of standard equipment and options
The most important standard features include the tridion safety cell, front airbags, seat belts with belt tensioners and belt-force limiters and safety seats with integral seat belts. Further features that are unique in the standard spec of vehicles in this class include esp, abs and an integrated brake assist.

The smart fortwo can be individualised and tailored to customer requirements with a wide range of extras. These include head/thorax side airbags, air conditioning (standard for passion), electric power steering, heated seats, alloy wheels (standard for pulse and passion), leather seats, Isofix child seat fastener, a high quality audio system with a CD changer for 6 CDs and a sound system featuring a subwoofer and an MP3 interface.

Furthermore, a portable navigation system that can be integrated in the car is available. Voice instructions are given via the loudspeakers of the stereo system. Further options that are often only found in high-end cars include a light and rain sensor and electrically adjustable and heated door mirrors.

Hambach: exemplary modular production and protection of the environment
The smart fortwo is produced in the French town of Hambach. System partners on site deliver pre-assembled modules straight to the production line. The production process has been optimised and the production time reduced from 9.5 hours to 8 hours. The whole final assembly, which only took 4.5 hours for the predecessor model, now takes just 3.5 hours.

Great importance is given to protection of the environment in Hambach. Only water-soluble, solvent-free base coats are used for the smart fortwo's plastic bodypanels.

The tridion safety cell is powder coated and no solvents are needed here, either. The solid colour bodypanels in the colours black, white and yellow are fully recyclable.

Same price level as the previous model
The basic price for the new smart fortwo  stay at the level of the predecessor model. The diesel variant, too,  remain an inexpensive "three litre" car that continue the great success of its predecessor. Likewise, the new smart fortwo cabrio continue to be by far the cheapest production cabriolet available worldwide.
Posted by classic automotives at 1:39 AM 0 comments