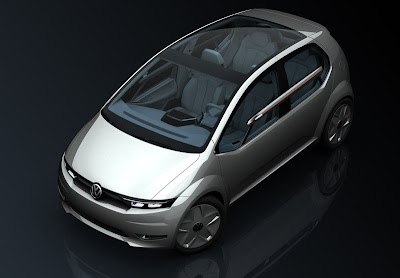 The designed for the city, the Go! together with the sporty Tex could increase the wide range of Volkswagen products to A0 segment even more.

With the same wheelbase as that of the Passat - 2700 mm - the Go! is a hatchback boasting a total length of 3990 mm thanks to its smaller overhangs. The battery pack is housed underneath the front and rear seating positions. This vertical package allows for the Go! a weight distribution of 58% on the front and 42% on the rear.

The design of the exteriors is dominated by extensive glass surfaces, in clear contrast with the trends of recent years of providing cars with increasingly smaller windows. In addition to filling the passenger compartment with light and giving its occupants the chance to thoroughly enjoy city scenery, also thanks to its totally glass roof, this design offers the driver with maximum visibility while driving.

The A pillar is in particular considerably farther forward than its traditional position, and the bulk of the door mirrors is eliminated by using cameras. The side windows also extend beneath the waistline - markedly high and optically taken up again by adding a longitudinal structure that crosses the side windows - drawing on a solution introduced in 1988 with the Asgard prototype.

This lets the driver benefit from maximum visibility even during manoeuvres and when taking tight curves.

Like in the Emas, only the lower part of the windows (the part beneath the longitudinal structure) can be electrically lowered. This solution reduces the weight that the electric window mechanism has to support to a minimum, and is in any case necessary for meeting all of the essential operations such as paying tolls or refuelling.

An electronically driven system pushes the door outwards and pulls it back parallel to the vehicle body for gaining access to the rear seats. This mechanism, which draws on the one used on the VW Milano Taxi (presented in May 2010), offers the advantageous practicality of sliding doors but without sacrificing their section (room is found inside for a comfortable armrest) and makes it possible to do away with the unattractive tracks on the body typical of this solution.

Without sacrificing the family feeling typical of the Golf and the Golf Plus, the Go! offers innovative solutions both in the front and back that combine aesthetic pleasure with practical functionality.

The grille, dominated by the large VW badge in the centre, incorporates the front light clusters with Xenon/LED technology. The air intake is placed at the height of the fog lights and horizontally splits the front spoiler, adjusting the air flow necessary for cooling the front electric motors.

The tailgate reintroduces the theme of the glass surfaces interrupted by a longitudinal insert that not only optically takes up the theme characterising the side view, but conceals the windscreen wiper and rear cameras that turn on when the reverse gear is engaged.

To make loading luggage easier, the tailgate can be operated electronically for both opening and closing. A sensor that activates the opening mechanism by simply moving the foot is also fitted underneath the bumper.

The light clusters are positioned under the glass surface and are invisible when the panel is off. When the tailgate is opened, they are repeated by two additional taillights located in the lower part of the bumper, beside the rear air intake, which also house the rear fog lights.

INTERIOR
Ergonomics is certainly the word that best describes the concept of the Go!'s interiors.

All of the elements have been styled and designed while keeping man in mind. Every single detail - from entering the car and using its controls to the shape of the seats and the instruments - has been designed from an ergonomic point of view.

The driver and three passengers sit on four identical and electronically adjustable seats. Those in the rear can also be folded down using an electronic adjustment mechanism and with remote control, and they form a single surface on the rear floor panel level to increase the maximum loading volume to 525 litres.

A storage console/sliding armrest sits between the front seats. If completely pulled back, it aids the driver when getting out from the passenger side. This solution is particularly useful if parking is narrow or if there are objects blocking the opening of the left door.

What's really new is the unprecedented positioning of the control panel. Once again with maximum ergonomics in mind, the most important information such as speed, fuel consumption and fuel level is placed at the base of the windscreen, in the rear of the deep dashboard. Giugiaro was extremely keen on this solution. "With the controls positioned in this way, the driver does not have to continuously change his focal length between the foreground of the dashboard and the long surface of the road in front of him. With this layout he can keep his eyes set on the road, distraction-free, and have all of the information necessary for driving available at all times."

The monitors of the rear view cameras are also at the base of the windscreen, but at the two side ends.

The dashboard contains a touchscreen monitor in the classic position. It groups together all of the auxiliary controls, the infotainment system, the satellite navigation system and, when the reverse gear is engaged, the images of the camera for manoeuvring.

ECO-FRIENDLY ESSENCE
The Go! is equipped with the electrical Blue-e-motion system totally designed and developed by Volkswagen.

Ideal for city traffic, the blue-e-motion system lets the Go! travel roughly 240 km in the combined cycle without emitting even a single gram of CO2.
Posted by classic automotives at 1:33 AM 0 comments