DaimlerChrysler attempted to buy the Rolls-Royce/Bentley marque when Vickers offered the company up for sale. When this attempt failed (they were outbid by BMW and Volkswagen respectively) they introduced the Maybach as a direct challenger in 2002. Both models are variants of the same ultra-luxurious automobile. The model numbers reflect the respective lengths of the automobiles in decimetres; the 57 is more likely to be owner-driven while the longer 62 is designed with a chauffeur in mind. The engine is a Mercedes-sourced 5.5-liter twin-turbo V12, generating 550 hp.
As of 2004, only 600 units had been sold. DaimlerChrysler projects that they may sell less than the 1,000 units expected. Just 152 Maybachs were sold in the United States in 2005, with worldwide production down to 300 units.

Email ThisBlogThis!Share to TwitterShare to FacebookShare to Pinterest
Labels: 2005, Maybach 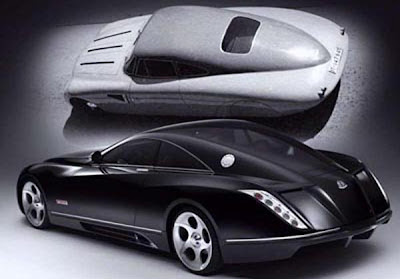 The Maybach Exelero is a high-performance concept car designed and built by luxury marque Maybach. The 690 hp (SAE) (514 kW) two-seater with a bi-turbo V12 engine is a one-off design commissioned by Fulda Tyres. Fulda is using this Maybach as a reference vehicle to test a new generation of wide tyres. The German luxury car manufacturer created the one-off model as a modern interpretation of its legendary streamlined car of the 1930s. There are various allusions to the historical predecessor, which was likewise based on a powerful Maybach automobile, in this case the Maybach SW 38, and was also used by Fulda for tyre testing.