Buick Wildcat concept, 1988
Posted by classic automotives at 12:53 AM 0 comments

Email ThisBlogThis!Share to TwitterShare to FacebookShare to Pinterest
Labels: 1988, Buick 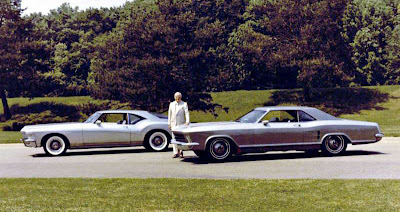 Email ThisBlogThis!Share to TwitterShare to FacebookShare to Pinterest
Labels: 1972, Buick 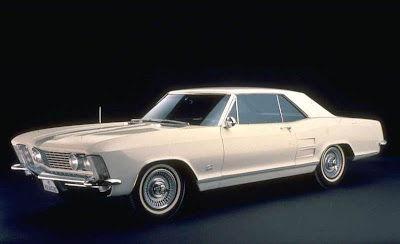 The Riviera's suspension used the same basic design as standard Buicks, with double wishbones front and a live axle located by trailing arms and a lateral track bar, but the roll centers were raised to reduce body lean. Although its coil springs were actually slightly softer than other Buicks, with the lighter overall weight, the net effect was to make the Riviera somewhat firmer. Although still biased towards understeer, contemporary testers considered it one of the most roadable American cars, with an excellent balance of comfort and agility.

The Riviera was introduced on October 4, 1962 as a 1963 model, with a base price of $4,333, although typical delivered prices with options ran upwards of $5,000. Production was deliberately limited to 40,000 or less to increase demand.

The Riviera continued with minimal trim changes for 1964, differing mainly in substitution of the old Twin Turbine for the new Super Turbine 400. This was the first year that the Stylized "R" emblem was used on the Riviera, a trademark that would continue throughout the remainder of Riviera's 36-year production run. Under the hood, the 401 (6.5L) was dropped in favor of the 425 in³ (6.9 L) V8, with 220 SAE HP. A 'Super Wildcat' version was optionally available, with dual Carter AFB four-barrel carburetors, rated at 240 SAE HP.

Changes for 1965 included the introduction of the Gran Sport option, which included the dual-quad Super Wildcat 425 V8, a numerically higher 3.42 axle ratio, dual exhausts, and stiffer, heavy-duty suspension. The 401 (6.5 L)V8 returned as the standard Riviera engine and the Super Turbine 400 transmission now had a variable pitch torque converter like the old Twin Turbine Dynaflow had two years before. Externally, the headlamps were concealed behind clamshell doors in the leading edges of each fender, as in the original design. Further back, the non-functional side scoops between the doors and rear wheel arches were removed, and the taillights were moved from the body into the rear bumper. A vinyl roof became available as an option, initially offered only in black.
Posted by classic automotives at 12:52 AM 0 comments