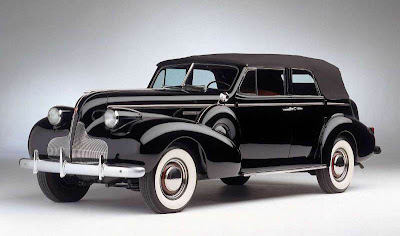 Roadmasters produced between 1936 and 1958 were built on Buick's longest wheelbase and shared its basic structure with senior Oldsmobiles. Between 1946 and 1957, the Roadmaster was Buick's premium and best appointed model, and was offered in sedan, coupe, convertible and station wagon bodystyles between 1936 and 1948. In 1949 a hardtop coupe, designated "Riviera" joined the model line up; a four-door hardtop joined the model range in 1956.

The 1953 Buick Roadmaster station wagon, Model 79-R, was the last wood-bodied station wagon mass-produced in the United States. Its body was a product of Iona Manufacturing which built all Buick station wagon bodies between 1946 and 1964.
In 1959 Buick again introduced a model range that represented a significant shift in its body design, and the Roadmaster name was replaced by the Electra name.
Posted by classic automotives at 8:51 PM 0 comments

Email ThisBlogThis!Share to TwitterShare to FacebookShare to Pinterest
Labels: 1939, Buick 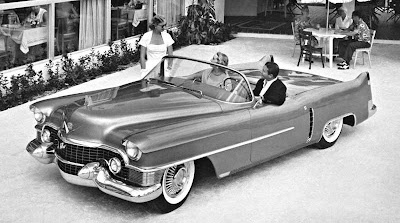 The Cadillac Le Mans was a concept car developed by Cadillac in 1953. It was named for the 24 Hours of Le Mans race in France, which Cadillac competed in in 1950. The design was a low-profile (51-inches to the windshield frame), two-seat, fiberglass-bodied roadster. It was powered by a 250-HP version of Cadillac's 331 CI V-8, a power output not reached in production Cadillacs until 1955. Though 4 units were built, the model never went into production, and it would be nearly 50 years before Cadillac developed another vehicle with a similar design concept, the Cadillac XLR. Of the four, 1 is documented as having been destroyed in a fire; the other 3 still exist with 1 of those currently in the Cadillac Historical Collection.
Posted by classic automotives at 8:47 PM 0 comments

Email ThisBlogThis!Share to TwitterShare to FacebookShare to Pinterest
Labels: 1953, Cadillac

The Eldorado model was part of the Cadillac line from 1953 to 2002. The Cadillac Eldorado was the longest running American personal luxury car as it was the only one sold after the 1998 model year. Its main competitors included the Mark Series and the lower-priced Buick Riviera. The name Eldorado was derived from the Spanish words "el dorado", the "gilded one"; the name was given originally to the legendary chief or "cacique" of a S. American Indian tribe. Legend has it that his followers would sprinkle his body with gold dust on ceremonial occasions and he would wash it off again by diving into a lake. The name more frequently refers to a legendary city of fabulous riches, somewhere in S. America, that inspired many European expeditions, including one to the Orinoco by England's Sir Walter Raleigh.

History
The name was proposed for a special show car built in 1952 to mark Cadillac's Golden Anniversary; it was the result of an in-house competition won by Mary-Ann Zukosky (married name = Marini), a secretary in the company's merchandising department. Another source, Palm Springs Life magazine, attributes the name to a resort destination in California's Coachella Valley that was a favorite of General Motors executives, the Eldorado Country Club. In any case, the name was adopted by the company for a new, limited-edition convertible that was added to the line in 1953.

Though cars bearing the name varied considerably in bodystyle and mechanical layout during this long period, the Eldorado models were always near the top of the Cadillac line. Nevertheless, and except for the Eldorado Brougham models of 1957-1960, the most expensive models were always the opulent, long wheel-based "Series 75" sedans and limousines.

1953
The 1953 Eldorado was a special-bodied, low-production convertible (532 units in total). It was the production version of the 1952 El Dorado "Golden Anniversary" concept car. Available in four unique colors (Aztec Red, Alpine White, Azure Blue and Artisan Ochre - the latter is a yellow hue, although it was shown erroneously as black in the color folder issued on this rare model). Convertible tops were available in either black or white Orlon. There was no special badging on the car, other than the "Eldorado" nameplate, in "gold", in the center of the dash. A hard tonneau cover, flush with the rear deck, hid the top in the open car version.

This first Eldorado had a wraparound windshield and a cut-down beltline, the latter signifying a dip in the sheetmetal at the bottom of the side windows. These two touches were especially beloved by General Motors Styling Chief Harley Earl and subsequently were widely copied by other marques. In fact, throughout the 50s, Eldorado was GM's styling leader, and since GM led the industry, where the Eldorado went, everyone else would tend to follow.

1954
In 1954, Eldorado lost its unique sheet metal, sharing its basic body shell with standard Cadillacs. Distinguished now mainly by trim pieces, this allowed GM to lower the price and they were rewarded with a substantial jump in sales.

1955
For 1955, the Eldorado's body gained its own rear end styling with high, slender, pointed tailfins. These contrasted with the rather thick, bulbous fins which were common at the time and were an example of Eldorado once again pointing the way forward.

1957
1957 saw the Eldorado (both the Biarritz convertible and the Seville hardtop) once again present an innovative rear-end design, a low, downswept fenderline capped by a pointed, in-board fin. The rear fenders were commonly referred to as "chipmunk cheeks". This concept was used for two years, but did not spawn any imitators.

1959
A different Eldorado Brougham was sold for 1959 and 1960. These cars were not quite so extravagantly styled but were very unusual pieces in themselves. Priced at $13,075, they cost $1 more, each, than their older siblings. The design was 100% Cadillac but the company contracted out the assembly to Pinin Farina of Italy, with whom the division has had a long-running relationship, and these Eldorados were essentially hand-built in Italy. Their discreet, narrow taillights, nicely integrated into modest tailfins, contrasted sharply with the "rocketship" taillights and massive fins of the standard 1959 Cadillacs and were an indication of where Caddy styling would go in the next few years. However, build quality was not nearly to the standard of the Detroit hand-built 1957–1958s, and the 1959–1960 Broughams are less desirable, it seems, than the 1st generation Broughams, although their value and collectibility remain high.

The last Eldorado Seville was built in 1960. After that, the Eldorado convertible became essentially a trim version of the standard Cadillac convertible. With the end of the importation of the Italian-built Eldorados in 1960, the name entered something of a fallow period.
Posted by classic automotives at 8:44 PM 0 comments