In March 1985, Volvo Car Corporation showed the result of yet another cooperation in the field of luxury between Sweden and Italy, the Volvo 780, designed and built by Bertone in Turin. The event took place on the Volvo Cars stand at the 1985 Geneva Motor Show.

Exclusive Volvo coupes made in smaller series as top models have been around since the early 1960s. Volvo realised early the importance of expanding into new market segments with the help of such cars, hereby making more customers interested in the less exclusive models.

The 262C was designed and built in Italy by Carrozzeria Bertone and came to the market in 1977. When the next generation of Volvo cars, the 760/740 were launched in the beginning of the 1980s, it did not take long before Volvo repeated the strategy; two saloon/estates were followed by a very exclusive coupe.

Totally new model
If the 262 was just a light modification of the existing body, the Volvo 780 was a totally new model that did not share any body panels with the four or five door cars. Again Bertone was the master behind the design and they were also responsible for the manufacturing, in the Turin factory. The car was launched at the Geneva Motor Show in March 1985.

Comfort was also the best word to describe the model. It was not a sporty car but very comfortable, luxuriously appointed and loaded with all sorts of equipment and accessories as standard features.

There were three engines to choose from: the 2.8 litre V6, a turbocharged four or the straight-six turbo diesel that Volvo used at the time. None of these engines, however, were capable of giving the car a top speed of 200 kph (125 mph) which is a psychological threshold on the German Autobahn, but it was exclusive, comfortable and quiet. It was primarily aimed at the USA, Japan and a few markets in Europe, one of them was Sweden.

The Volvo 780 stayed in production until 1990 without any major changes to the exterior but technically it kept up with the 760 and got independent rear suspension for model year 1988. It eventually also received the cult status exclusive cars usually get. Only 8,518 780s were made and today it is a collector's item, cared for by owners in both Europe and the USA.
Posted by classic automotives at 4:17 AM 0 comments

Email ThisBlogThis!Share to TwitterShare to FacebookShare to Pinterest
Labels: 1987, Volvo 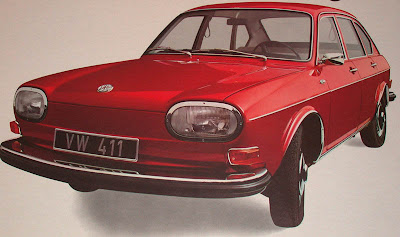 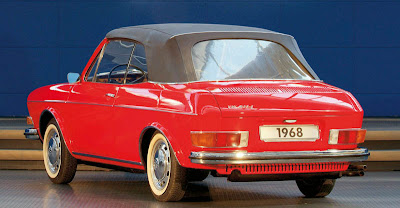 On September 19, 2008 forty years have passed since Volkswagen presented the VW 411, at that time the company's largest and most powerful model yet, to some 200 journalists in Wolfsburg. The journalists had earlier put the VW 411 through its paces on the new Volkswagen proving ground in Ehra-Lessien, testing the vehicle's equipment and performance. Volkswagen built 367,728 units until production ceased in July 1974, and 416 of these are currently registered as old-timers (as of September 2008).

The ads claimed there had never been a VW like this before. And they were quite right. This was the very first model with a unibody, a four-door option, more space than any other Volkswagen and a longer wheelbase than the Volkswagen Beetle. A newly-designed, powerful, 68 bhp air-cooled 1.6 liter boxer engine mounted in the rear of the Volkswagen 411 was robust enough even for long journeys at a maximum speed of 145 km/h. The innovative sporty chassis with MacPherson strut front suspension and rear suspension with double joint axles also used in the Porsche 911 made sure the car held the road well. The midsize saloon featured "the luxury of a luxury car". With either a Normal or an L equipment line, "Wolfsburg's biggie" offered customers space and ride comfort, enhanced safety, a total 570 liters of luggage space in front and rear and an optional automatic transmission.

Compared to the Volkswagen 1500/1600 launched in 1961, the VW 411 was noticeably larger and better equipped. Volkswagen aimed to establish the new vehicle in the upper midsize segment which was beyond the reach of the Beetle and the Type 3, and to expand the market position in the long term by broadening the model range. For this reason, the publicity concentrated on technical innovations and the high level of comfort as well as highlighting typical Volkswagen characteristics such as quality, economic efficiency and service.

In the run-up to the market launch on October 5, 1968, dealers, the press and customers responded positively to the Volkswagen 411. Once the car had come to market, problems with the clutch on the first models delivered and an increasingly negative press curbed sales prospects. The most common complaints from customers related to engine and driving noise, the engine's limited output and what was perceived as an unaesthetic front end. Since over 80% of VW 411 buyers were already Volkswagen customers, the vehicle failed to win new customer groups. As a result of these marketing problems, which could not be remedied by sales incentives either, Volkswagen sporadically lowered production to 75 vehicles per day.

The company introduced an improved version, the VW 411 E, for the 1970 model year. Electronic fuel injection boosted engine output to 80 bhp and the front end, which had given the model the nickname of "Nasenbär" (coati), received a facelift. The VW 411 E Variant, provided even more space for luggage, and this estate version was soon selling twice as well as the hatchback saloon. Type 4 exports to the USA began in 1971, and the car sold better than expected there, soon accounting for roughly 40% of total sales. A further new and improved model called the VW 412 followed in 1972. Production of the Type 4 at the Wolfsburg plant continued until 1973, when the production line was relocated to Salzgitter, and production at Volkswagen of South Africa commenced in 1969.

Though the VW 411/412 did not break any sales records, the model nevertheless has an important role to play in Volkswagen's automobile history as the last large series model with air cooling and a rear-mounted engine. A 1966 prototype is on display at the Automuseum Wolfsburg.
Posted by classic automotives at 4:12 AM 0 comments