The Honda Civic is an automobile manufactured by Honda. It was introduced in July 1972 as a two-door coupe, followed by a 3-door hatchback version that September. With the transverse engine placement of its 1169 cc engine and front wheel drive, like the British Mini, the car provided good interior space despite overall small dimensions.

Early models of the Civic were typically outfitted with a basic AM radio, rudimentary heater, foam cushioned plastic trim, two-speed wipers, and painted steel rims with a chromed wheel nut cap. The current Civic has become much more luxurious with satellite-linked navigation, a six-speed manual, power locks and power windows available. Still, many regard the Civic as representing a good value for the money, combining good performance, reliability and economy, as well as a very low rate of depreciation.

The Civic evolved from having a 1170 cc engine (1973) to having engines with larger capacities and more creature comforts (air conditioning, power windows, etc.) through the 1980s, 1990s and into the 2000s.

Initially the Civic was sold with either a four-speed manual or a two speed "HondaMatic" model. Later models went to a five-speed manual and a full four-speed automatic transmission. Like the Mini, the transaxle was integrated with the engine unit.

Second generation (1979-1983)
The second generation Civic had a new, sleeker body and increased wheelbase to 88.6 inches for the hatchback and 91.3 inches for the wagon. The two-door sedan was no longer produced. All engines was now of the CVCC design ranging from 1335 cc giving 55 hp to 1488 cc giving 67 hp. The transmission was either a four-speed manual, a five-speed manual or a two-speed automatic. In 1981 a four door sedan was introduced and the two-speed automatic gearbox was replaced by a three speed. In 1982 it was slightly restyled with rectangular headlamps and black bumpers. In 1983 the sportier Civic S replaced the 1500GL.

Third generation (1983-1987)
For the third generation the wheelbase was increased by 5 inches to 96.5 inches. A new 12 valve (three valves per cylinder) 76 hp 1500 cc engine was introduced. The base hatchback still used the 1300 cc engine giving 60 hp. Supension was updated to independent rear suspension. The CRX was a Civic with a slightly different body. In 1985 the CRX Si was introduced. It came with a fuel-injected version of the 1500 cc engine giving 91 horsepower. In 1986 the Civic got flush-mounted headlights. Other news for the year was a four-speed automatic and an Si version of the Civic hatchback.

Fourth generation (1987-1991)
Again the wheelbase was increased to 98.4 inches. The body was designed with lower hood line and more glass giving less drag. The Civics also got a new family of engines. A 1500 cc 16-valve engine giving 92 hp was used in the DX hatchback/sedan, new LX sedan and the wagon. The base hatchback had a 70 hp version of the same engine. All engines were fuel injected. All wheels had double-wishbone suspension. In 1990 the EX trim was introduced.

Sixth generation (1996-2000)
Beginning in 1997, Honda produced the first iteration of Civic to receive the "Type-R" appellation (applied first to the Integra Type-R), with the EK9 chassis Civic Type-R. The EK9-generation Civic Type-R had a maximum output in the range of 180 PS JIS (177 hp/132 kW), increased over the more common 160 PS (158 hp/118 kW) B16A engine in the SiR/VTi models, and included various alterations to the chassis to improve handling and reduce weight (such as better welding of the frame, and removal of the radio and noise-suppressing materials).

Seventh generation (2001-2005)
In 2001, Honda announced the release of the Civic Type-R for the EP chassis, a more sporty variant of the most recent model of Civic and successor to the EK9 Civic Type-R. Unlike the EK9 version, which was produced solely in Japan, the EP Civic Type-R is produced in the United Kingdom and exported to Japan. The EP Civic Type-R has a specific output of 200 PS (197 hp/147 kW) at 8000 rpm, a six-speed manual transmission, a reworked exterior with a bullet-like hatchback design, aeroform bumpers, spoiler, and 17 in wheels. The interior of the Type-R includes Recaro seats and a Momo steering wheel, and the model also includes Type-R-specific badging, a helical limited-slip differential, and has been reported to accelerate from zero to 60 mph in about 6.6 seconds (6.4 in facelifted model).

Email ThisBlogThis!Share to TwitterShare to FacebookShare to Pinterest
Labels: 1973, Honda 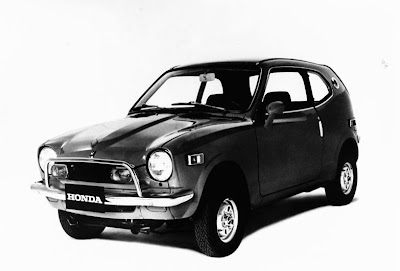 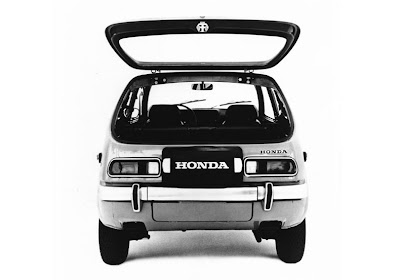 Email ThisBlogThis!Share to TwitterShare to FacebookShare to Pinterest
Labels: 1971, Honda

The Honda N600 was introduced in 1969. It was technologically advanced for its time, with an all alloy engine which could achieve 9000 rpm. Engine output was 36–45 hp (27–34 kW) and the N600 was capable of 81 mph (130 km/h). It delivered surprisingly peppy performance because of its light weight (around 550 kg/1100 pounds), due to compact dimensions and some plastic parts (like the boot lid). The first brakes were very weak. Rear suspension was a torsion bar and leaf springs. Production was stopped in 1972, after the sportier Honda Z600 (or Z-Act, depending on country) was introduced.
Posted by classic automotives at 6:37 AM 0 comments