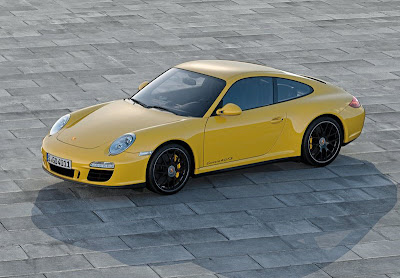 Porsche AG is widening the top end of its Carrera model line and pairing up each of the two 911 Carrera GTS with an all-wheel drive twin. That means that the Porsche 911 Carrera 4 GTS Coupé and Cabriolet will combine the 408 hp (300 kW) top of the range engine of the Carrera GTS family with the intelligent, all-wheel drive Porsche Traction Management (PTM). Driving dynamics are not the only source of attraction. Economics are as well. Thanks to Porsche Intelligent Performance the new all-wheel 911s consume no more than the equivalent Carrera 4S version, the Coupé remains at 11.0 l/100 km (25.7 mpg imp.) and the Cabriolet at 11.2 l/100 km (25.2 mpg imp.) respectively based on the New European Driving Cycle (NEDC). Moreover both of them boast an even more comprehensive standard equipment package compared with the Carrera 4S models.

The Porsche 911 Carrera 4 GTS power unit has its origins in the 3.8-litre, six-cylinder Carrera S engine. A wholesale revamping of the intake duct added 23 hp (17 kW), taking the power output to 408 hp (300 kW) at 7,300 rpm. The special aspiration system not only improves peak power output but flexibility and power development as well thanks to a more generous torque curve in the lower and middle engine speed range. 320 Newton metres kick in from as low as 1,500 rpm; the six-cylinder engine delivers its rated torque of 420 Nm in the broad engine speed range from 4,200 rpm and 5,600 rpm. The sports exhaust system fitted as standard ensures a distinctly sporty sound. It invests the new Porsche 911 Carrera 4 GTS with an unmistakable acoustic signature and the rear view of its tail pipe with its unique black surface design lends it a unique character.

At full power the Porsche 911 Carrera 4 GTS Coupé sprints to 100 km/h (62 mph) in 4.6 seconds, the Cabriolet in 4.8 seconds. The Carrera 4 GTS is fitted as standard with a six-speed manual transmission but the Porsche-Doppelkupplungsgetriebe (PDK) seven-speed is available as an option if desired. The PDK shaves an additional 0.2 seconds respectively off the acceleration times from 0 to 100 km/h (62 mph).

In the Porsche 911 Carrera 4 GTS as well, PTM all-wheel drive stands for Porsche's typical driving pleasure with even more driving stability, traction and agile handling. The PTM achieves this by directing the optimal proportion of the engine torque to the front wheels via a multiple-plate clutch. What's more, just how single-mindedly the Porsche 911 Carrera 4 GTS is designed for driving dynamics is evident from the use of a standard limited-slip differential. This mechanical rear differential lock contributes to the driving dynamics of the electronically controlled all-wheel drive system.

Visually, the new Porsche 911 Carrera 4 GTS models with all-wheel drive differ in points of detail from earlier variants with rear-wheel drive: In addition to the type name on the doors and rear lid, the distinguishing characteristic of all models with all-wheel drive is the additional reflective stripe between the taillights. What the Carrera GTS models have in common is the 911's wide body, otherwise reserved for the all-wheel version of the 911s, and the rear axle track width that goes with it. In numerous other details as well the GTS models differ both visually and technically from the other Carrera models. For example, they run on 19 inch RS Spyder wheels in black with central locking and gloss-lathed rim flanges fitted with 305/30 ZR 19 tyres on the rear axle.

Additional visual features include the Sport-Design front apron with black painted spoiler lip and special side skirts, also in black. Driver and passenger are accommodated on sports seats. Typical of the GTS, the emphatically sporty black Alcantara covering on centre panels, steering wheel rim, gearshift and handbrake lever, door handles and door storage box lid and extension are offered as standard in addition to a range of leather upholstery options.

The Porsche 911 Carrera 4 GTS Coupé, including country-specific equipment and VAT at 19 per cent, is offered in Germany at a price of 111,956 euro, the Cabriolet costs 122,071 euro. Both models will be on sale in Germany from July 2011.
Posted by classic automotives at 2:58 AM 0 comments