The style has changed, but not the content: "Many German motorists see motoring not just as a comfortable and fast means of transport, but also as a sporting activity. These are people who, once they see an aerodynamic car body with a long and sleek engine compartment, as well as a speedometer extending all the way to 150 km/h, feel that strong yearning for wide open roads simply perfect for driving fast, for Alpine passes just begging to be conquered, and for ompetitors so easy to overtake."

It was precisely with these words that BMW announced the Company's first self-engineered roadster in 1934. And indeed, this concept with its six-cylinder power unit was destined to shape the future of the brand, extending all the way to the current BMW Z4.

The starting point for this development came at the Berlin Motor Show in May 1934. Here, together with the BMW 315 Saloon, BMW for the first time presented the prototype of a Sports Roadster with exceptionally attractive lines. Right behind the long and sleek engine compartment there were two sports seats tailored to the driver and front passenger protected by the low, raked windscreen and an mergency roof.

The rear end tapered out in an elegant sweep to the back of the car, adding a particular aerodynamic touch with excellent streamlining.

The radiator grille on this two-seater was inclined much further to the rear than on the Saloon, with mighty, sweeping front wheel arches extending on beneath the doors into the rear wheel arches. To reduce air drag to a minimum, the rear wheels were fully covered, while the body of the car itself rested on an electrically welded steel-pipe double frame with three crosswise box elements.

Small but hot: six-cylinder power unit displacing 1.2 litres.
Both the saloon and the sports car were powered by the same outstanding engine: a 1.5-litre straight-six developed out of the 1.2-litre originally featured in the former BMW 303. The crankcase and cylinder block of this outstanding engine were made of one single piece, the engine featured one camshaft beneath the block, with tappets operating the vertical hanging valves aligned in series via rocker arms. The intake and exhaust pipes, finally, were on the same side.

A feature quite unusual today is the different distances between the individual cylinders, with the second and third and, respectively, the fourth and fifth cylinders being further apart, the space in between being used for the crankshaft and amshaft bearings.
The crankshaft without any counterweights therefore ran in four bearings, just like the camshaft.

This was however not the reason for this particular design and configuration, which was rather attributable to the assembly process at the time, with the crankshaft being completely pre-assembled together with the connecting rods and pistons. And since the pistons, as a result, had to be inserted from beneath, the main bearings for the crankshaft had to remain outside of the cylinders, not extending into their contour lines. As a result, the main bearings had to be accommodated between cylinders spaced out at a large distance.

While this power unit delivered maximum output of 34 hp on the saloon with its two carburettors, maximum output of the six-cylinder in the BMW 315/1 sports model was 40 hp. And the standard of efficiency offered was quite exceptional, BMW's engineers proudly stating that "this beautiful and fast sports car consumes only 10-2 litres of fuel on 100 km, with oil consumption between 0.1 and 0.2 kg. So in terms of running costs, it is no more expensive than a small car far lower down in the market".

With the public simply falling in love with the BMW 315/1, BMW decided to build the car in a small series - also because the Company wanted to make a more powerful entry into the prestigious world of motorsport. Starting in summer 1934, therefore, the very attractive BMW 315/1 was retailed at a substantial 5,200.- reichsmarks. The production model differed from the prototype primarily through the modified arrangement of the headlights and side ventilation grids taking the place of the bent openings originally featured on the first model.

Outstanding success in motorsport.
Reaching a top speed of 120 km/h or 75 mph, the BMW 315/1 Roadster was one of the really serious contenders in the sports car market at its time. Indeed, BMW's story of success on the race track quickly took on even greater significance with this new model, the BMW 315/1 achieving its first significant success in the International 1934 Alpine Rally.

The starter grid for this rally in Nice was made up of 127 truly outstanding cars looking at daily race sections of 500-600 kilometres to be covered at a minimum speed. On the fourth day there was an additional speed test at Stilfser Joch.

After covering precisely 2,867 kilometres or 1,778 miles, 96 of the 127 cars which had originally entered the race reached the finish line in Munich - 66 thereof without having lost one point. The five cars entered by the BMW Works Team were the only cars in their class to complete the International Alpine Trophy without one single penalty point, the BMW 315/1 Team Richard Brenner/Albert Kandl/Ernst v. Delius finishing first in their category.

Only 230 units of the BMW 315/1 were completed by mid-1935, many of them going to private drivers. One of them was Ralph Roese, a BMW works driver for many years, who built himself a BMW 315/1 Special. This was a complete re-build of the 315/1, the highly modified engine ultimately developing no less than 136 hp in a brand-new race car body weighing just 380 kg or 838 lb.

Given qualities of this kind, it is no surprise that this racing car finished first in its very first race at Nürburgring in 1936, a staggering 17 kilometres ahead of the competition. Understandably, this special model remained a great success over the years until finally winning the German Road Racing Championship in 1939.

Achieving this kind of success, both the drivers and the Company soon started looking for more: a car in the prestigious category up to two litres. And so it is no surprise that another, even more powerful version of the BMW Roadster - the 319/1 - entered the market in late 1934. Identical in its looks to the BMW 315/1 with the exception of the air vent on the engine compartment, the BMW 319/1 Roadster was powered by a 1.9-litre tuned to 55 hp and benefiting both from larger displacement and three larger downdraught carburettors.

Obviously, an engine like this was easily able to cope with a two-seater weighing just 780 kg, accelerating the roadster in standard trim to a top speed of pproximately 135 km/h or 84 mph. At the same time this was of course a truly exclusive car due to its retail price of 5,800 reichsmarks. Production from 1934-1936 therefore amounted to just 178 units, with the BMW 319/1 again bringing home outstanding success in motorsport.
Posted by classic automotives at 6:19 AM 0 comments

Email ThisBlogThis!Share to TwitterShare to FacebookShare to Pinterest
Labels: 1935, BMW 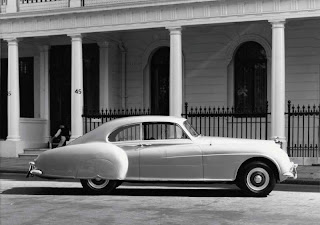 The R Type was the second series of post-war Bentley automobile, replacing the Mark VI. The front of the saloon model was identical to the Mark VI, but many had custom coachwork.

The Continental model was produced specially for continental Europe, with many coachbuilt by H.J. Mulliner. This would be the first appearance of the famed Bentley Continental name.

Email ThisBlogThis!Share to TwitterShare to FacebookShare to Pinterest
Labels: 1950, Bentley 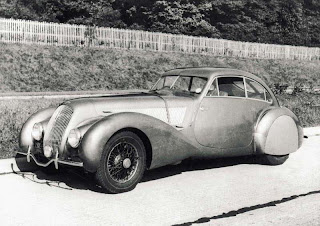 Bently Embiricos, 1937
Posted by classic automotives at 6:12 AM 0 comments