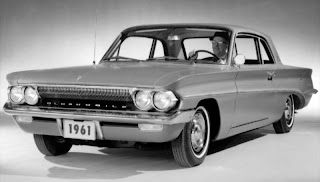 The Cutlass name was used by Oldsmobile as almost a sub-marque, with a number of different vehicles bearing the name simultaneously. This was probably shrewd, because the Cutlass name had great equity and became one of the most popular nameplates in the industry in the 1970s. However, the proliferation of Oldsmobile Cutlass models caused confusion in the market-place in the 1980s, when three different vehicles (the Cutlass Calais, Cutlass Ciera, and Cutlass Supreme) all shared the name.

Origins of the Cutlass
The first Oldsmobile Cutlass was an experimental sports coupe designed in 1954. It rode a 110 in (2794 mm) wheelbase, and had a dramatic fastback roof line, with a stock Oldsmobile V8 engine. Its platform was quite similar to the later compact Olds F-85, which was not introduced for seven more years.

First-Generation Compact
General Motors began developing its first compact cars in 1956, beginning with the Chevrolet Corvair. The following year a second series of somewhat larger cars was planned for Buick, Oldsmobile, and Pontiac, what would be termed "senior compacts." They would share the same body shell and lightweight engine. Oldsmobile designer Irving Rybicki began work on the Olds model in 1957. It finally went on sale in 1960 as a 1961 model.

1961
The first-year F-85 was offered as a two-door sedan, a four-door sedan in base or Deluxe trim, or a four-door station wagon with either two or four seats, in base or Deluxe form. Initial sales were somewhat disappointing, but were soon picked up by the May introduction of the Cutlass sports coupe (a pillarless two-door hardtop), sporting unique trim, an interior with bucket seats and center console, and a four-barrel version of the V8 engine, rated at 185 hp (138 kW). This engine was optional on other F-85s, as was a four-speed manual transmission. 80,347 F-85s were built in total.

Car Life magazine tested a F-85 with the standard engine and automatic transmission, and recorded a 0-60 (0-96 km/h) time of 14.5 seconds, with a top speed just over 100 mph (160 km/h). They praised its construction, but found its steering too slow and its suspension too soft for enthusiastic driving.
Posted by classic automotives at 3:14 AM 0 comments