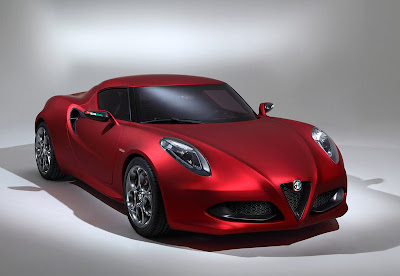 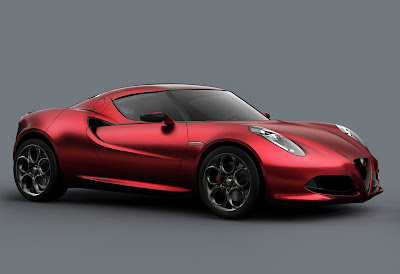 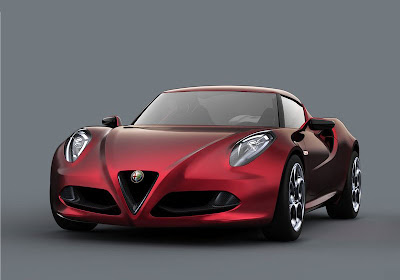 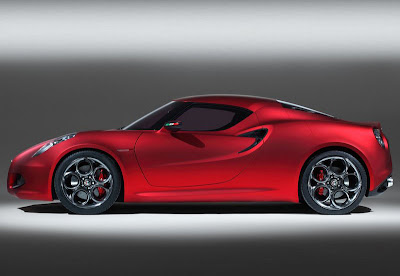 The Alfa Romeo 4C Concept made its debut at the 81st Geneva International Motor Show. The compact "supercar" which represents the true essence of a sports car, according to the brand's values: performance, Italian style and technical excellence aimed at maximum driving pleasure in total safety.

The new concept presents the classic formula of the two-seater, rear-wheel drive coupé with its engine at the centre, a length of approximately 4 metres and a wheelbase of less than 2.4 metres: dimensions which serve both to emphasise the compact size of the car and to accentuate its agility. Distinguished by its graceful and clean external lines, the same principles are also applied to the inside, with the Concept's specific on-board design maintaining features and devices which directly reflect the car's sporting spirit.

Quite simply, this vehicle screams Alfa. Its sports car soul creates a unique driving sensation, both on the road and when racing, where its velocity and transverse acceleration become even more demanding.

Born from the experience acquired through the Alfa Romeo 8C Competizione and 8C Spider models, the new concept car shares its rear-wheel drive with the exclusive supercars as well as its philosophy based on achieving maximum driving pleasure and the proverbial Alfa Romeo road handling. This is an objective which the 8C Competizione and the 8C Spider pursue mainly through their increased power, while the Alfa Romeo 4C Concept follows the route of limited weight, made possible by extensive use of carbon, which also plays a structural role and guarantees exceptional agility with a weight/power ratio which is lower than 4 kg/HP. The chassis supports a body crafted completely from carbon, inside which there is space for the driver and passenger, while the rear frame structure and the crash boxes use aluminium extensively. The final result is a significant reduction in weight, limited to less than 850 kg, as well as the optimisation of the vehicle's centre of gravity, which gives the advantage of increased agility and drivability on the most challenging roads.

The name "4C Concept" is suggestive of the sports driving pleasure which only the spectacular "4 cylinder" 1750 Turbo Petrol engine which offers over 200 HP can bring. Already featured on a number of models in production, for example the Giulietta Quadrifoglio Verde, the engine boasts cutting-edge technical solutions such as direct injection, dual continuous variable valve timing, turbocharger and the revolutionary scavenging control system which eliminates turbo lag.

Located centrally in the rear of the vehicle, the engine in the Alfa Romeo 4C Concept ensures performance which matches or exceeds that of a 3 litre engine whilst still delivering the moderate fuel consumption which is typical of a compact, 4 cylinder engine. Coupled with the new automatic "Alfa TCT" twin dry clutch transmission, launched only a few months ago on the MiTo and which will soon be available on the Giulietta, the powerful 1750 Turbo petrol engine allows the Alfa Romeo 4C Concept to reach a top speed of over 250 km/h and to accelerate from 0 to 100km in under 5 seconds. The vehicle integrates its Alfa DNA technology perfectly, a true philosophy which brings together all of the on-board technology, making it enjoyable and customisable for the driver and further accentuating the "competitive" nature of the Concept compared to other vehicles currently on sale.

The Alfa Romeo 4C Concept has an extremely sophisticated suspension layout (high quadrilateral at the front, MacPherson at the rear) to ensure maximum agility and road handling. This solution, along with the rear-wheel drive and the extraordinary weight/power ratio, ensures Alfa Romeo driving pleasure, enhanced even further by the weight distribution (40% on the front axle and 60% on the rear axle). The Concept takes up the Brand's sporting tradition, taking us back to its origins, when agility and the weight/power ratio were the keys to a successful racing vehicle, and combining these aspects with the Alfa Romeos which take to the road every day.
Posted by classic automotives at 6:11 PM 0 comments 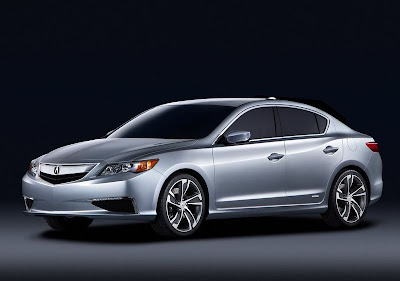 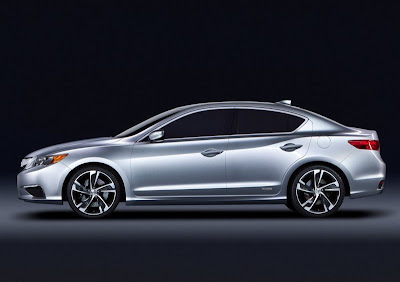 The Acura ILX Concept is the precursor to an all-new Acura luxury compact sedan scheduled for launch in Spring 2012. To be positioned as the gateway to the Acura brand, the ILX will feature three different powertrains, including Acura's first-ever gas-electric hybrid.

"First time luxury buyers place the highest value on exterior styling, affordability and environmental issues and that's a virtual definition of what we have created with the new Acura ILX," said Jon Ikeda, head of the Acura Design Studio. "The strategy behind this new model is to position ILX as the first opportunity for many young buyers to enter the luxury market."

Sleek, sporty and aerodynamically efficient, the exterior of the all-new ILX combines luxury, performance and efficiency. A beautifully styled luxury sedan, the Acura ILX Concept has a compact, yet formal proportion, targeting a very professional image. The ILX delivers both, with a greenhouse that provides excellent visibility, an aerodynamic low and wide stance, the ILX is immediately recognizable as an Acura

The Acura ILX feature a high-quality, well-appointed interior that is smart, spacious and sporty. It offer a number of new, high-value features, including a smart entry keyless access system and pushbutton start, along with Pandora internet radio interface and SMS text message function for smart connectivity with the world.

As with all Acura models, the ILX have a long list of standard features, different trim levels (that include a Technology Package), multiple transmission choices, and excellent standard safety features — including Acura's acclaimed Advanced Compatibility Engineering™ body structure, front, side and side-curtain airbags, 4-channel anti-lock brakes and Vehicle Stability Assist™ (VSA™). Acura anticipates that the ILX will achieve top ratings in both NHTSA and IIHS crash safety testing.

The new Acura ILX manufactured exclusively by Honda Manufacturing of Indiana, LLC, in its Greensburg, Ind. plant — one of only three plants in the world to receive J.D. Power and Associates' 2011 Platinum Award for outstanding quality.
Posted by classic automotives at 6:10 PM 0 comments