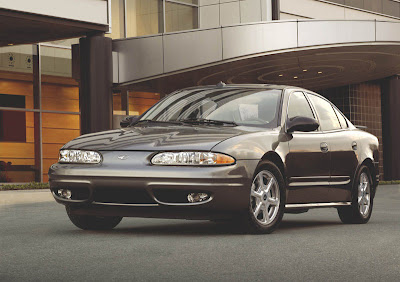 The Oldsmobile Alero was introduced in spring 1998 as a 1999 model to replace the Achieva and Cutlass. The Alero went into production on April 6, 1998. All Aleros were built in Lansing, Michigan. The Alero was Oldsmobile's last compact car as well as the last vehicle sold under the brand. Production ended on April 29, 2004.

History
The design of the Alero was originally previewed in 1997 with the Alero Alpha concept car, a futuristic V6-powered sport coupe that featured many design elements seen in the production Alero as well as some that were never meant for production.

The Alero was sold either as a 4-door sedan or as a 2-door coupé. It shared its chassis and many parts, including engines, with the Pontiac Grand Am. It was part of the GM N platform.

In 2003, the Alero's daytime running lights were changed from high-beam to low-beam.

The Alero was also sold in select European countries as the Chevrolet Alero, although only available as a sedan. The car still featured its Oldsmobile badges even though sold under the Chevrolet brand, since most European consumers would not recognize what the badge stood for. Chevrolet badges were added to the grille and rear fascia during the 2000 model year. The Toronado was sold similarly.

The final Alero Final 500 Edition (#500 of 500) also happened to be the final Oldsmobile ever built, and was signed under its hood by the employees of the General Motors Lansing plant and then given to the R.E. Olds Transportation Museum.

A preview of the planned replacement for the Alero was seen in 2001 with the unveiling of the "O4" concept, designed by Bertone. The car was an open top 4-seater with European styling but some Oldsmobile traits, and powered by the latest Ecotec I4 engine. The name had multiple meanings, including "Oldsmobile 4-Seater" as well as implying the year 2004 as a planned date for production.

Unfortunately, the O4 concept was unveiled a few weeks after General Motors announced that they would be phasing out the Oldsmobile brand, meaning that production possibilities of the O4 would never see reality. Because of this, a second generation Alero was never built and the car was phased out in 2004.

Variant prototypes
General Motors commissioned the construction of Alero prototypes either for testing or to gather public opinion on possible future plans for the Alero. These variants:

Posted by classic automotives at 2:45 AM 0 comments