The Subaru Vivio was a keicar that was introduced in March 1992, and manufactured by Subaru.

The name "Vivio" is a reference to the numbers 660 written in Latin numerals, and also inspired by the word vivid. The Vivio replaced the Subaru Rex. It was available in 3 and 5-door versions. The "Vivio Bistro" was a variation with a retro theme, with Mini-esque front and rear fascias, matching upholstery and modifications to the dashboard. The Bistro series was popular and Japan would see a string of modern retro-styled cars.

The Vivio with a variety of supercharged 4-cylinder engines.
Posted by classic automotives at 1:15 AM 0 comments

Email ThisBlogThis!Share to TwitterShare to FacebookShare to Pinterest
Labels: 1992, Subaru 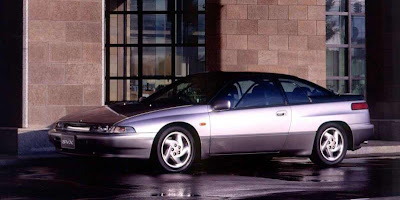 The Alcyone SVX, also known in the United States simply as the SVX was a mid-sized sports-touring coupe sold by Subaru from 1991 to 1997.

History and sales
Subaru introduced the SVX in the United States in July of 1991, following up the U.S. debut with a Japanese market introduction in September of that year. The model was designed and marketed as the replacement for their aging Alcyone XT and Alcyone XT6 coupes. US sales were good and topped 3,859 units in 1993, although it is reported that Subaru intended to sell 10,000 SVXs each year. Sales dropped significantly for the next few years before falling to just 640 units in 1997, at which point Subaru discontinued the vehicle.

Overall sales of the SVX were 14,257 in the United States and a total of approximately 25,000 worldwide. 2,478 SVXs were sold in Europe (with 854 headed directly to Germany). Roughly 7,000 of all SVXs sold were right-hand drive models.

Body
In contrast to the boxy XT, the SVX had curvy, almost futuristic lines designed by Giorgetto Giugiaro of ItalDesign and an unusual all-glass canopy with 2-piece side windows. The windows are split about 2/3 of the way from the bottom, with the division being parallel to the upper curve of the door frame. These half-windows are generally seen on vehicles with "gull-wing" or "scissor" doors such as the Lamborghini Countach and the De Lorean DMC-12.

Drivetrain
Unlike the previous model, which had been available with either a turbocharged 4-cylinder (as XT) or a naturally aspirated 6-cylinder (as XT6), the SVX debuted with and remained available with only one engine, the EG33 model 3.3 litre flat-six. The engine was an indirect development of the ER27 model, 2.7 litre unit that had powered the Alcyone XT6, although the new 3.3 litre variant was equipped with dual overhead camshafts and 4 valves per cylinder, and had an increased compression ratio of 10.0:1, bringing power up to 230 hp (172 kW) at 5,400 rpm and 228 ft·lbf (309 Nm) of torque at 4,400 rpm.

Though it was considered to be a very powerful vehicle at its debut, the SVX was heavy, weighing in at about 3600 pounds (1600 kg), and was only available with a 4-speed automatic transmission, both of which adversely affected performance.
Posted by classic automotives at 1:14 AM 0 comments

Email ThisBlogThis!Share to TwitterShare to FacebookShare to Pinterest
Labels: 1991, Subaru

Volvo PCC Concept, 2000
Posted by classic automotives at 1:13 AM 0 comments