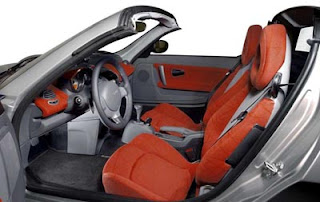 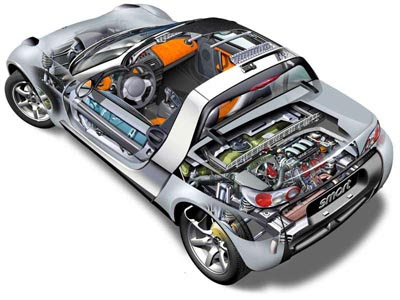 Smart Roadster, 2003
Smart Roadster
The Smart Roadster is a two-door microcar first introduced in 2003 by Smart GmbH. Unfortunately, sales of the Roadster and Roadster Coupé were far below expectations, resulting in a halt of production of both models in November 2005.

History
At the 1998 Paris Motor Show, the two-seat, 2.5-metre Smart City Coupe (later named Smart Fortwo) was launched. This was the beginning of a new car brand and one of the more radical vehicle concepts to hit the European market since the bubble cars of the 1950s. It was also the beginning of a difficult period for Smart. The City Coupe had stability problems that were uncovered only immediately prior to launch. These forced a package of alterations to be made that were both expensive and compromised the car’s handling, ride and gear shift. Public concerns over the car's stability, combined with Smart’s elitist marketing and the sheer radicality of the car’s design, proved damaging to initial sales. Production projections were slashed from 200k per year to 80k, close to disastrous for a new brand with just one product.
Inside the company, the evangelical buzz surrounding the launch of the radical City Coupe quickly evaporated. With new management, new marketing initiatives and continuing revisions to the car’s engineering to answer pulic concerns, future vehicle plans, including development of a four-seat model, had not been far advanced. It was under these inauspicious circumstances the Smart Roadster was born.

The Design & The Development
Under design director Jens Manske in autumn 1998, Smart's 14-strong design and engineering team began to sketch possible future Smart cars. They soon realised that the powertrain of the City Coupe was ideal for a small sports car, with a compact turbo engine driving the rear wheels via a sequential 6 speed gearbox.

Following Smart’s ‘reduce to the max’ philosophy and general innovative approach, a concept for a super compact, practical and pure sports car was generated. Two quarter-scale exterior and two quarter-scale interior models were made in February 1999 with Volker Leutz’s exterior and Christoph Machinek’s interior proposals selected for development into full-size development models. The design of the car had progressed considerably by the time Michael Mauer officially arrived from Mercedes Benz's Japan design center to take over Menske's position in May 1999. Mauer worked closely with the design team to quickly develop the roadster, with the intention now of producing a show car for the upcoming 1999 IAA motor show in Frankfurt.

The Roadster concept was well received at Frankfurt and helped to convince management that the car should be developed for production. At the same time a decision was made to develop Mauer’s idea for a coupe version as a concept car for Paris motor show a year later. As development of the coupe concept began, so the roadster show car was developed over the following year with both exterior and interior designs completed by November 2000 However, colour and trim design continued until a year later.

By early 2000 the Smart City Coupe had finally started to gain sales momentum, with its cabrio version making a significant addition to total Smart sales. In March Mauer left Smart for Saab, succeeded by Hartmut Sinkwitz in May. As the third design director of Smart during the Roadster's development, Sinkwitz had to bring the concept to production in a very short time. This task may have been made somewhat easier by the Roadster having been designed from the start to use existing powertrain and other City Coupe components. Given some of the advanced design features, it is a credit to the design team that so much of the concept car made it to production.

Concept Car
the ‘Roadster Coupe’ as shown at the 2000 Paris motor show was already on its way to production form. It shared the design of the Roadster from the doors forward, but had a glass targa roof and rear structure resembling a very small estate (station wagon) in the same way as the BMW Z3 coupe and the Saab 9X concept car developed under Mauer at Saab a few years later.
Production versions of both Roadster and Roadster Coupe debuted together at the 2002 Paris Motor Show and were available to buy within a few months. Both cars were unique in the market, being significantly smaller that the Toyota MR2, MG TF, Fiat Barchetta and Mazda MX5, but offering similar performance and practicality to the base versions of these cars while significantly more fuel efficient.

Production
The Smart Roadster and Roadster Coupé were introduced in 2003, based on a stretched platform of the Fortwo (full length is 3427 mm). The two variants are meant to be reminiscent of the British roadster of yore, such as the Triumph Spitfire or the MG B. Both the Roadster and Roadster Coupé are available with a removable Targa roof or an electrical Softtop. The Roadster is powered by 45 or 60 kW (61 or 82 PS) versions of the turbocharged 3-cylinder engine in the rear, which is engineered by Mercedes Benz. The Roadster Coupé has only the more powerful 82 PS engine. A steering wheel with Formula 1-style gearpaddles, to control the semi-automatic sequential transmission, is optional. With weight as low as 790 kg, it is meant to provide the emotion of driving a sports car at an affordable cost. Still, the Roadster's price is not very far from that of a Fiat Barchetta or Mazda MX-5.

Posted by classic automotives at 4:33 AM 0 comments

Email ThisBlogThis!Share to TwitterShare to FacebookShare to Pinterest
Labels: 2003, Smart 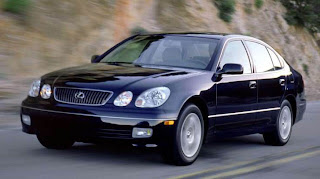 Lexus GS300, 2004
The Lexus GS is a mid-size luxury sports sedan / executive car manufactured by the Toyota Motor Corp. under the Lexus brand and sold as the Toyota Aristo in Japan. Based on the platform and running gear of the Toyota Crown, it was introduced in 1991 in Japan and two years later in the United States, Europe and selected markets in Asia. The model was designed to fill the gap between the ES and LS and to provide Lexus with a sports sedan that could compete with the BMW 5-Series and the Mercedes-Benz E-Class. For most of its life, the GS had a wider wheelbase than the ES, and was shorter than the ES in length.

Though essentially identical, GS and the Aristo differ in their engine and transmission combinations as well as equipment packages.

The second generation Aristo was launched in Japan, codenamed JZS160 for cars with the 2JZ-GE engines and JZS161 for those with the 2JZ-GTE twin-turbo engines. VVT-i was now standard, resulting in a bump in torque. The twin-turbo version was available with electronic four-wheel steering, VDC and an automatic gearbox with a manual sequential mode. No 4WD models were offered.

In 2001, the engine received a 0.3 liter bump in displacement and the model was renamed GS 430. Peak horsepower was unchanged, but torque increased to 325 ft·lbf.

Posted by classic automotives at 4:29 AM 0 comments