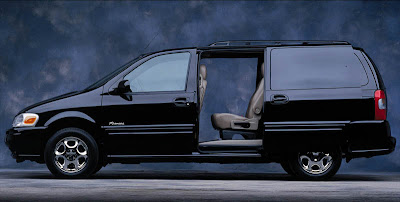 The first generation Silhouette was prominently featured in the 1995 film Get Shorty where it was repeatedly referred to as "The Cadillac of minivans". GM's attempt of releasing their first FWD minivans in 1990 pursued the company to create one of the very-first luxury minivans, and at the same time, Chrysler released the Town & Country minivan.

Having failed twice to capture a significant portion of the domestic minivan market from Chrysler, General Motors brought out an entirely new U platform series of minivans, theoretically based on the lessons learned from its previous mis-steps. Still stinging from the criticism of the "dustbuster" minivans, the new Silhouette would be completely conventional an all respects. The vehicle would be of steel unibody construction, and styling would be as conservative as possible. The previous generation was a little too large for comfortably navigating European streets, so this new range of models would be narrower and slightly smaller than was the norm for the United States in order to produce a single range of minivans that GM hoped would fill the needs of both the North American and European markets.

During the development of this generation of the U-body minivan, General Motors extensively benchmarked the then current Dodge Caravan, Plymouth Voyager and in the case of the Silhouette in particular, the Chrysler Town and Country. The resultant vehicles bore an uncanny resemblance to the immensely successful trio of Chrysler minivans, which during this era accounted for over 50% of domestic minivan sales. Unfortunately for GM, the Chrysler vehicles they were using as their yardstick were replaced in 1996 by a completely new generation of minivans from Chrysler, which (somewhat ironically for GM) featured a significantly sleeker and more stylish design than their predecessors. The Chrysler minivans also included a host of innovative features and clever packaging ideas that were not available on any other minivan on the market. General Motors ended up with a nice enough vehicle in the end, but one that was positioned to compete against a vehicle that had already been antiquated by its successor models.

Two different wheelbase lengths were offered as well as dual sliding doors. Silhouettes, in keeping with their luxury positioning, offered many features as standard that were optional on competing makes and on its platform mates. In 1998, it became one of the first vehicles on the market to offer a VCR with overhead retractable LCD screen for back seat viewing, which has since become a "must-have" option for families with children.

Mixed sales success
The Silhouette and its platform mates achieved slightly better sales than their avant-garde predecessors, but also failed to capture a significant share of the market. The Silhouette was a close competitor in many of the categories deemed of importance, but was a winner in no categories, the minivan market had become significantly more crowded with competing products that proved to be more desirable and throughout its production it was widely considered a second-tier competitor, certainly competent but not a stand-out in any category.
Posted by classic automotives at 5:54 AM 0 comments

The Oldsmobile Aurora was a luxury automobile made by the Oldsmobile division of General Motors and launched in 1995 to replace the discontinued Toronado 2-door personal luxury coupe. It was a luxurious 4-door sedan riding on the same Cadillac-derived G platform as the 2-door Buick Riviera. Since the demise of the Ninety Eight in 1996, the Aurora became the flagship Oldsmobile. Also, in a way it is the successor of the Ninety-Eight or the Eighty-Eight (at least for 2000). A V6-powered version was introduced in 2001 to supplant the Eighty-Eight and the LSS. It was introduced to bring new life to Oldsmobile, but the first few years of Aurora did not even feature the Oldsmobile name. There was even a rumor at the time that the name of the whole Oldsmobile marque would be changed to simply "Aurora."

Second Generation
Oldsmobile's original intention for the second generation was to move the Aurora further upmarket, retaining its V8-only drivetrain and sharing a platform with the new Buick Riviera, as the original Aurora had done. This would have created more room within the Oldsmobile lineup for a four-door Eighty-Eight successor known as the Antares. However, Buick dropped its Riviera development plans and fiscal trouble found Oldsmobile, so Oldsmobile was forced to re-engineer the Antares into an acceptable Aurora in short time. The Aurora was downsized as the successor for the H-body Eighty-Eight on the short-wheelbase G-body (on which the Buick LeSabre and Pontiac Bonneville joined, as they used to be on the H-body). The 2001 Aurora is the product of that re-engineering.

The second-generation Aurora used a new, less-expensive version of the G platform with a shorter wheelbase. Unlike the original Aurora, this platform was shared with other GM divisions, with Buick offering the Park Avenue and LeSabre, and Pontiac offering the Bonneville.

Oldsmobile also offered a V6 engine in the Aurora for the first time. The V6 in question was the LX-5, a cut-down relation of the DOHC Aurora V8, dubbed the "Shortstar." The V6-powered Aurora was produced for the 2001 and 2002 model years only, with production ceasing in mid-2002.

Email ThisBlogThis!Share to TwitterShare to FacebookShare to Pinterest
Labels: 2001, Oldsmobile 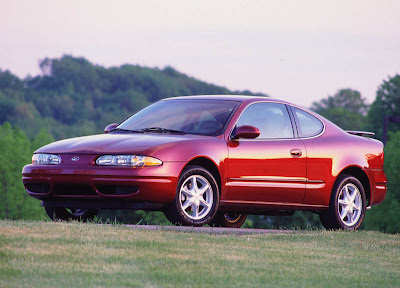 The Oldsmobile Alero was introduced in spring 1998 as a 1999 model to replace the Achieva and Cutlass. The Alero went into production on April 6, 1998. All Aleros were built in Lansing, Michigan. The Alero was Oldsmobile's last compact car as well as the last vehicle sold under the brand. Production ended on April 29, 2004.

History
The design of the Alero was originally previewed in 1997 with the Alero Alpha concept car, a futuristic V6-powered sport coupe that featured many design elements seen in the production Alero as well as some that were never meant for production.

The Alero was sold either as a 4-door sedan or as a 2-door coupé. It shared its chassis and many parts, including engines, with the Pontiac Grand Am. It was part of the GM N platform.

In 2003, the Alero's daytime running lights were changed from high-beam to low-beam.
The Alero was also sold in select European countries as the Chevrolet Alero, although only available as a sedan. The car still featured its Oldsmobile badges even though sold under the Chevrolet brand, since most European consumers would not recognize what the badge stood for. Chevrolet badges were added to the grille and rear fascia during the 2000 model year. The Toronado was sold similarly.

The final Alero Final 500 Edition (#500 of 500) also happened to be the final Oldsmobile ever built, and was signed under its hood by the employees of the General Motors Lansing plant and then given to the R.E. Olds Transportation Museum.

A preview of the planned replacement for the Alero was seen in 2001 with the unveiling of the "O4" concept, designed by Bertone. The car was an open top 4-seater with European styling but some Oldsmobile traits, and powered by the latest Ecotec I4 engine. The name had multiple meanings, including "Oldsmobile 4-Seater" as well as implying the year 2004 as a planned date for production.

Variant prototypes
General Motors commissioned the construction of Alero prototypes either for testing or to gather public opinion on possible future plans for the Alero. These variants:
* Alero OSV - "Oldsmobile Speciality Vehicle", an experiment in an aftermarket parts brand for Oldsmobile. Featured a body kit, supercharged I4, custom interior, and special cherry red paint.
* Alero OSV II - Another experimental vehicle, this time featuring an LX5 DOHC 3.5L V6 (used in the Oldsmobile Intrigue and Aurora and featured custom dark green paint.
* Alero 442 - A set of show cars based on the Alero coupe fitted with a body kit similar in design to the Oldsmobile 442. Each Alero 442 show car had a unique color, including white with gold stripes and white with pink stripes.
* Alero California - A custom built version of the Alero coupe featuring racing parts including a large rear wing, racing seats, sport tires, and custom graphics painted in brown and yellow.
* Alero Convertible - An experiment in the possibility of creating an Alero with a convertible soft top to help broaden the appeal of the car to young buyers. The Oldsmobile O4 concept also hinted that the next generation Alero could have had a convertible model.
* Alero Pace Car - Built by General Motors as part of their fleet of Oldsmobile safety cars for the Indy Racing League, featuring custom yellow and white checkered flag graphics.
Posted by classic automotives at 5:52 AM 0 comments