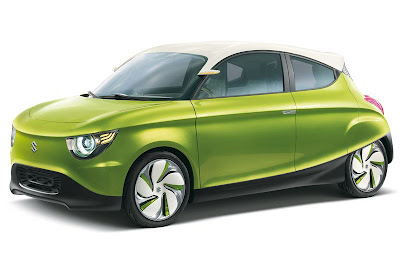 Suzuki is showcasing the G70 at the 2012 Geneva Motor Show. This model made its debut at the 2011 Tokyo Motor Show as the REGINA, and it now wears a G70 badge which originates from a nickname adopted during the development process. While the goal of reducing CO2 emissions is an absolute must throughout automotive development, Suzuki also believes that A-segment models should always be customer-responsive. With this in mind, Suzuki has focused on developing an A-segment car with CO2 emissions no higher than 70g/km for market launch in the near future, featuring - as the name suggests - the G70's environmental technologies.

Though the Suzuki G70 is a petrol model, its fuel economy and emissions are on a par with those of a hybrid, thanks to its weight of just 730kg and a drag coefficient more than 10% lower than that of a Suzuki A-segment production model. It also features a direct-injection turbo petrol engine and an Engine Auto Stop Start system with regenerative braking. All in all, the G70's CO2 emissions do not exceed 70g/km.

Platform
The Suzuki G70's platform is light but rigid, since it has more curves than a conventional platform. The components and materials used in the G70 also reflect an uncompromising focus on lightness. As a result, the G70 weighs a mere 730kg (more than 100kg less than the Suzuki Alto).

Advanced aerodynamics
The shape of the G70 means excellent aerodynamics and greater interior comfort. A relatively upright windscreen ensures good forward visibility while directing air smoothly over the top and sides of the body. Other drag-reducing details include rear combination lamps which ensure a smooth airflow toward the rear and C-pillar garnishes which steer and adjust the airflow. The G70's drag coefficient is more than 10% lower than that of a Suzuki A-segment production model.

Powertrain
The environmental benefits of the Suzuki G70's lightness and low running resistance are complemented by a highly efficient 800cm3 turbocharged direct-injection petrol engine with CVT.

Exterior
The Suzuki G70 is not just another car with environmental features: it also has a distinctive character deriving from its "emotional" styling. The design language focuses on "premium casual", which can be interpreted as mature elegance and fine quality. The use of transparent materials and relatively bright colours creates an airy impression and succeeds in expressing the quality of a compact car with less of an environmental burden.

Colouring
Green bodywork underscores the Suzuki G70's environmental credentials. The paintwork has a deep, refined look which emphasises the car's highly contoured shape. A white finish on the roof creates a fashionable two-tone look which suits the lightweight model.