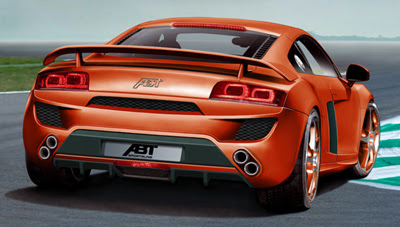 The Abt R8: Sports car in perfection

There are cars and dream cars. The latter includes Lamborghini's Gallardo, Ferrari's F430 or Porsche's 911 Turbo. These cars make your heart beat faster and show the perfected magic of speed on the roads. Abt Sportsline's R8 among the outstanding super sports cars and is getting ready to overtake them in the prestige duel.

The design studies already show the first impressions of Abt's sportiest creation - and prove that the Kempten-based tuner manages to perfect an excellent serial model like the R8 to detail and accentuate its racing genes already in the drawing. The front of the Bavarian R8 shows the marked Abt face. Together with the unique and beautiful rear with its four inclined arranged exhaust end pipes, the rear diffuser and the extravagant rear wing, the front of the Abt R8 is part of an overall concept that brings about phenomenal roadholding.

The add-on parts of the super sports cars from the Allgäu-region improve downforce and ensure perfect balance of the front and rear axis. This is especially notable in speed ranges reserved for only a few cars. The sideblades which were developed especially for the Abt R8 and the Abt side skirts give the Abt R8 a new and individual design besides aerodynamical advantages. The aerodynamically efficient Abt body kit, which also includes carbon-fibre parts, is a real eye catcher but also shows the state-of-the-art Bavarian precision work. With the ingenious construction, which also includes a carbon-fibre bonnet, not only a maximum reduction in weight is achieved but it also ensures optimized weight distribution of the Abt R8 - the pure presence of the model athlete already shows this.

The technology and the design milestones do not only come from Maranello or Sant'Agata-Bolognese but also from Kempten. The Abt R8  a gorgeous dream car with the genes of a top-class race car. This special automobile  belong to one of the fastest among the fastest; the Abt R8 will also challenge the Lamborghinis and Porsches.

With regards to the anticipated performance data the Bavarians are traditionally discreet.
But this data already amazes sports car fans and makes them want to spur the hot-blooded Bavarian horses. 530 HP (390 kW) are to be drawn from the 4.2 litre-V8 thanks to the Abt supercharger. Compared with the serial model which already shows impressive performance data this means an increase of 110 HP (81 kW). The brand new Abt 20-inch BR wheels stylishly transfer this power onto the asphalt. The all-wheel-drive dream car accelerates from 0 to 100 km/h in just 3.9 seconds and reaches a top speed of 317 km/h. These values are synonymous with magic and this extraordinary super sports car desperately wants to be driven. By means of the Abt suspension which is adjustable in height, pressure and rebound, the performance and driving comfort of the super sports car can be adapted perfectly to the requirements of its driver.
Posted by classic automotives at 5:54 PM 1 comments

Email ThisBlogThis!Share to TwitterShare to FacebookShare to Pinterest
Labels: 2008, Audi 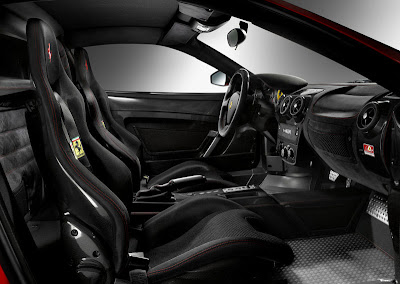 Ferrari has chosen to unveil the new Ferrari Scuderia Spider 16M at the World Finals in Mugello in celebration of its recent victory in the Formula 1 Constructor's World Championship 2008. This new high performance sports car features the very best of Ferrari's latest mid-rear-engined 8-cylinder technology. In fact, the Ferrari Scuderia Spider 16M is faster round the Fiorano circuit than any other Prancing Horse open-top road car yet built. This truly evocative special series model, of which just 499 unique examples will be produced, is aimed at the most passionate clients, drivers who demand both exclusivity and superb driving pleasure.

The Ferrari Scuderia Spider 16M is available in a choice of two new signature colour schemes: the standard version is black with grey trim, while a tricolour livery is also available as part of the Carrozzeria Scaglietti Personalisation Programme. The new car also sports a special plaque on its rear grille commemorating Ferrari's 16th Constructor's World title. The exclusivity of the interior is underscored by the silver "limited series" plaque just above the air vents at the centre of the dashboard. Other exclusive features include a roll-bar with carbon-fibre outer shell and a specific new generation audio system that can be combined with the removable customised Ferrari iPod Touch 16 GB with central dock just in front of the dashboard.

From a technical point of view, this car has a dry weight of 1340 Kg (80 kg lighter than the Ferrari F430 Spider). This, combined with the 510 hp provided by its V8 engine and a power-to-weight ratio of 2.6 kg/hp, means that it delivers blistering 0-100 kph acceleration in just 3.7 seconds and a superb top speed of 315 kph.
Ferrari Scuderia Spider 16M

Email ThisBlogThis!Share to TwitterShare to FacebookShare to Pinterest
Labels: 2009, Ferrari 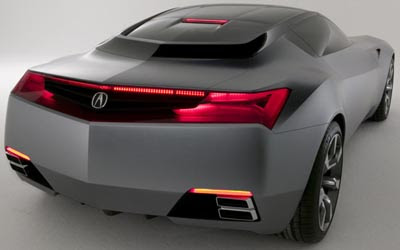 The Acura Advanced Sedan Concept is the purest expression of advanced design, performance and luxury, highlighted by its powerful, wide stance and deeply sculpted surfaces. The primary goal of this design study was to create a sophisticated, refined sedan with a mysterious presence.

The concept's generous exterior proportions suggest that a large, powerful engine lurks beneath the surface. The exterior lines reveal a sheer, sculpted lower body contrasted with a taut, architectural cabin. Though ultra-modern in its design, the concept retains the classic silhouette associated with a flagship sedan.
Low to the ground, the concept is anchored by large 22 inch front and 23 inch rear tires which are mounted to custom billet-machined, polished aluminum wheels. Powerful brake discs and calipers accent the wheels and large ducts direct cooling air to the components. Bold wheel arches and flares add to the concept's muscular appearance.

The sleek, compact cockpit nestles atop the sculpted body and flows from hood to trunk. For a unique panoramic view, the roof is constructed entirely of tinted glass that shades the occupants while still connecting them to the outside world.
To capture the essence of an ultra luxurious sedan but give it a striking, mysterious presence to create a vehicle with a dual personality. The concept echoes this quality with its clean exterior lines, a wide, stance, high performance cues and key luxury accents.

The hood is accented with pronounced character lines that culminate in the aggressive five-sided grille, which contributes to the sedan's bold presence. The commanding grille is constructed of polished aluminum and features a cut crystal Acura emblem. The narrow headlights also double as air intakes and are positioned low on the bumper, further enhancing the sedan's already commanding 79.5 inch width.
In the rear, the Advanced Sedan Concept has a flush mounted rear bumper with the high-mounted stop lamp integrated into the center break of the trunk. The jeweledtaillights are pushed to the outer edge of the bumper to further enhance the vehicle's wide and low appearance, while integrated dual exhaust outlets complement the sedan's performance-oriented style.
Posted by classic automotives at 5:50 PM 0 comments