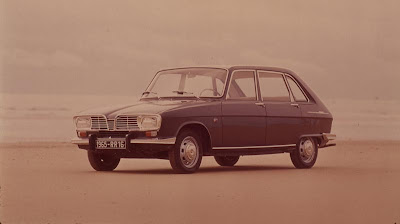 Renault 16, 1965
The Renault 16 was an executive car produced by French manufacturer Renault between 1965 and 1980 in Sandouville, Le Havre, France.

The R16 was voted European Car of the Year by a board of European motoring journalists in 1966. Over 1,845,959 R16s were produced during the model's lifetime.

In the autumn of 1965, Renault launched one of the world's first hatchbacks - a halfway move between a saloon and estate bodystyle which would eventually become the most popular car bodystyle in the world.

It sold well in most of Europe, winning praise for its spacious and comfortable interior. Equipment levels were also high for the price. Initially, Renault sold the R16 with just a 1.4 L gasoline engine in GL specification; then followed the 1.6 L TS which could top 100 mph. The top-line model was the TX, which was launched in 1973 and had a 5-speed manual transmission. Equipment included power windows and central door locking, features previously unknown on family cars in Europe.

Production of the Renault 16 lasted until 1980 when it was finally replaced by the less successful Renault 20. Even by this stage, when it was nearly 15 years old, the Renault 16 was still one of the most popular and highly rated family cars on sale in Europe. Current Renault styling chief Patrick le Quement has made no secret his admiration for the R16 - and incorporated a subtle tribute to its "bird-beak" grille in the corporate look he devised for many of the models (Laguna, Mégane, Scénic) that the company launched in the 1990s.

Timeline
* August 1964 - First official pictures of the R16 are released to the media.
* December 2, 1964 - The first R16 is completed at the factory in Sandouville, near Le Havre, a facility purpose-built for the R16.
* January 5, 1965 - The Renault 16 is introduced to the world and the press in a presentation on the Côte-d'Azur.
* April 1965 - The R16 is made available to the public, in two specifications: Grand Luxe and Super, both powered by a 1470cc engine
* 1967 - Ventilation and heating are both improved, and the dashboard is redesigned. An automatically operated choke is also made available.
* 1968 - The 16 TS is introduced. It features a new 1565cc engine, an all-new instrument panel that included a tachometer and water temperature gauge, and many other new features including two-speed windscreen wipers, rear defroster, passenger reading light, and optional power windows.
* 1969 - The other R16 models get the wheels and brakes of the TS. Reverse lights are installed as standard on the TS, placed under the taillights (they are optional on other models).
* 1969 - The R16 TA, with an automatic transmission, is introduced. The TA is effectively a R16 Super with some features from the TS.
* 1970 - Front seatbelts are installed on all R16s.
* 1971 - The R16 undergoes a mild revamp. Among the most obvious changes are new rectangular taillights. The Grand Luxe and Super are replaced by the L and TL specifications, and a version of the TS's 1565cc engine (with the cylinderhead from the 1470cc) is installed on both. The TA is discontinued and an automatic transmission is made available as an option across the whole R16 range.
* 1973 - An upmarket 16 TX model is introduced at the Paris Motor Show, equipped with a 1647cc engine (an enlarged version of the TS engine) and a five-speed manual transmission. The TX was distinguishable from other R16s on the exterior by its four rectangular headlights with large turn signal lights underneath. Among the other features available on the TX were Gordini wheels, a rear spoiler, a rear windscreen wiper, a laminated windscreen, automatic seatbelts, power windows, central locking and optional air conditioning.
* 1974 - The aluminium grille on L, TL and TS is replaced by a black plastic grille.
* 1976 - The automatic transmission ceased to be available as an option on the L, TL and TS; however, a TL Automatic model was launched.
* 1977 - The L and TS are discontinued.
* 1978 - Reverse lights are installed as standard on all models.
* 1979 - Rear three-point seatbelts are made standard on all models. The TL Automatic is discontinued.
* January 1980 - R16 production ends.
Posted by classic automotives at 5:09 AM 0 comments

Email ThisBlogThis!Share to TwitterShare to FacebookShare to Pinterest
Labels: 1965, Renault 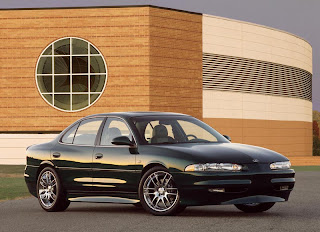 The Intrigue was designed to compete more with Japanese automobiles, and replaced the Cutlass Supreme. It went into production on May 5, 1997. It was similar to a range of mid-sized sedans from other GM divisions, including the Buick Century, Buick Regal, Chevrolet Impala, Chevrolet Monte Carlo and the Pontiac Grand Prix. The Intrigue diverged from its siblings in its chassis tuning, equipment, and some dimensions. Wheelbase, for instance, was 1.5 inches shorter for the Intrigue than the Grand Prix.

All were built at the GM Fairfax plant in Kansas City, Kansas, where the Grand Prix was also built (the Buick Century and Regal, and the Chevrolet Impala and Monte Carlo were all built in Oshawa, Ontario, Canada). For the 1999 model year, a new, sophisticated DOHC 3.5L "Shortstar" engine, a six-cylinder based on the GM Northstar V8, was introduced. On June 14, 2002, the final Intrigue rolled off the assembly line, as part of the Final 500 Collectors Edition.

Year-to-year changes
* 1999: For the beginning of this model year, the DOHC 3.5 L "Shortstar" engine was standard in the top-line GLS and optional on mid-level GL and base GX models. Later, it became standard on all models. Decklids now wore Oldsmobile badge (in the previous model year, there was a complaint that some people couldn't tell that Intrigues were Oldsmobiles). All models now got a thicker, leather-wrapped steering wheel. New to the option list was GM's OnStar emergency/communications system.
* 2000: New to the option list for 2000 was an antiskid system called the Precision Control System. Precision Control System was designed to help keep the car on its intended path by selective braking of one or more individual wheels. Though optional on all models, GX buyers had to order optional traction control to get the new antiskid system. Heated power front seats were now standard on GLS models. Retained accessory power was standard this year.
* 2001: On GX models, traction control became optional instead of standard. New standard automatic headlights were now standard on all models. Premium Leather and Precision Sport option packages were also available for this year.
* 2002: GLS models now featured a two-tone interior with sterling accents, as well as standard Homelink, sunroof, and driver lumbar. All models featured new family of radios with RDS and standard CD player (borrowed from the newly-redesigned Aurora). Tropic Teal and Indigo Blue were two new exterior colors. All models had new LATCH (Lower Anchor and Top tether for Children) in three rear seat positions. Sun & Sound package was available on GL models (includes Bose sound system and sunroof). New winchester headliner was inside. Production of the Intrigue ended in June 2002 as part of the phaseout of the Oldsmobile brand.
Posted by classic automotives at 5:07 AM 0 comments