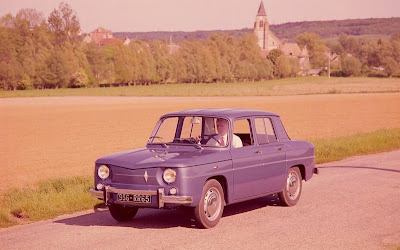 The 8 was released in july 1962 and was based on the outgoing Renault Dauphine. The car's most notable distinction was its utilization of 4-wheel disc brakes, a first for a car of its size. The 8 was powered by an all-new 956 cc engine developing 44 PS.

A more powerful model, the 8 Major, was released in 1964, featuring an 1108 cc engine developing 50 PS. A still more powerful version, the 8 Gordini, was also released that year, with a tuned engine of the same capacity but developing 90 PS and a five-speed manual transmission. The Gordini was originally available only in blue, with two white stripes. In 1965, the Renault 10 Major, a plusher version of the 8 with a different front and rear, was released, replacing the 8 Major. The 10 is significant as the first Renault model to be offered with a fully automatic transmission, which unlike all later automatic Renaults had a push button gear selector.

In 1967, the 8 Gordini received a facelift, adding two extra headlights, and its engine upgraded to a 1255 cc unit rated at 100 PS. Both the 8 and the 10 (already lost the word Major) were heavily revised for 1968, with some of the 10's features making it in to the 8, resulting into a reappeared 8 Major which replaced the basic model. The 10 itself was facelifted, with rectangular headlights added. The changes also saw the addition of the 8S, a sportier model with a 1108 cc engine rated at 60 PS. A larger unit, the 1289 cc engine from the new Renault 12, was added in 1970, giving birth to the R10 1300.

French production of the 8 and 10 ceased in 1971, with final sales as late as 1973. FASA-Renault, the company's Spanish arm, continued to produce models 8 and 8TS (quite analogue to the 8S) until 1976 for the Spanish and Mexican markets.
Posted by classic automotives at 7:46 PM 0 comments

Email ThisBlogThis!Share to TwitterShare to FacebookShare to Pinterest
Labels: 1965, Renault 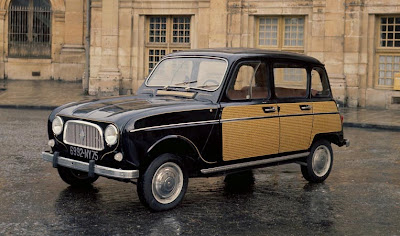 Renault 4 Parisienne, 1963
The Renault 4, also known as the 4L (pronounced "Quatrelle", which could be heard as "4 wings" in French), is a supermini produced by the French auotmaker Renault between 1961 and 1993. It was the first front-wheel drive Renault.

The History
The Renault 4 was Renault's response to the 1948 Citroën 2CV. Renault was able to review the plusses and minuses of the 2CV design and come up with a larger, more urban vehicle. In the spring of 1956, Renault Chairman Pierre Dreyfus launched this new project: designing a new model to replace the rear engined 4CV that would become an everyman's car, capable of satisfying the needs of anybody. It would be a family car, a woman's car, a farmer's car, a city car. It would also be suitable for motorists around the world.

The production Renault 4 was finally revealed at the Paris Salon de l'Automobile in 1961, in the L version (L for Luxe), hence the popular name 4L.

Early versions used engines and transmissions from the Renault 4CV. The initial transmission was a 3-speed manual, an obsolete feature when compared to the four-speed manual of the thirteen-year old Citroën 2CV. Unlike the 4CV, which was a full monocoque, the R4 body was bolted on to a chassis. However, the body had a structural role and the chassis could twist if the body was removed without proper shoring. This semi-monocoque construction would later allow Renault to build other models on the R4 platform like the Renault 6 and the successful Renault 5. The R4 had four-wheel independent suspension. A surprising, yet often unnoticed, feature on the R4 is its shorter wheelbase on the left than on the right. This allowed a very simple design of the rear suspension using transverse torsion bars, and didn't affect the handling of the car. The front torsion bars were longitudinal. During its production run it was regarded as an estate car but in retrospect some now say the Renault 4 pioneered the hatchback body style, and is therefore significant in the history of car design. It was not the first, however, to introduce a top-hinged single-unit tailgate, which is one of the distinguishing features of the hatchback body style: the 1954 Citroën Traction Avant also included this innovation, while the earlier Aston Martin DB2/4 Mk1 of 1953 also had a small top-hinged tailgate.

While never achieving the same curiosity appeal as the Citroën 2CV, the R4 was the most successful French car of all time, with 8 million units being produced between 1961 and 1993. RHD market sales of the 4 Sedan ended in 1985, but LHD production and European sales continued until 1993, when the R4 was finally shelved.

In Colombia, the car was one of the most sold, and remained in the memory of many colombians, the car was nicknamed "Amigo fiel" (Faithful friend). The car was manufactured in the SOFASA plant in Envigado (a city near Medellín) from 1970 to 1992.

Design
Though the Renault 4 had a long production run, development of the design was limited - it never changed size or shape. The engines were significantly larger than the small 425 cc engine in the 2CV. The R4 always had a four-cylinder watercooled engine. The original engine's capacity of 782 cc was increased to 845 cc from 1963 onwards. In 1978, a new 1108 cc engine was introduced, a smaller version (956 cc) of which replaced the 845 cc engine in 1986. Chrome trim was eventually phased out on all models and aluminium grilles were replaced with plastic items. There were three different dashboards, all of which were simple in design. Changes to the body panels amounted to nothing more than a slightly altered hood and hinge alterations.

Despite the runaway success of the Renault 4, or perhaps as a result of it, Renault directed a lot of effort into developing its small cars. They designed the Renault 6 and the Renault 5 while the Renault 4 was still selling extremely well. Some criticised this at the time, but the Renault 5 competed in a different sector (3-door supermini). The Renault 4 is thus a bridge between the small utility vehicle (2CV) and the supermini design (R5, Peugeot 205).

The Renault 4 remained an extremely basic car throughout its life, and development never extended to making the design any less simple or spartan. However, in spite of its basic design, the Renault 4 had an extremely comfortable ride, due to well-designed suspension (which lent the Renault 4 a softer, more fluid ride than many modern cars) and a habitable interior due to comfortable seats, powerful heater and effective ventilation. However, the windows lacked winding mechanisms and instead used sliding mechanisms. To some this gave the Renault 4 character, but to many others it was just annoying and a tell-tale sign of the age of the design.

Another detail which made the Renault 4 different from other cars was the gear lever, which was on the dashboard. This was an effective means of creating a flat floor, using a simple design borrowed from the 2CV. It passed over the longitudinal engine and clutch to the gearbox at the front. Though unconventional and criticised by conservative motoring journalists, the dash-mounted gear lever was easy to use and left more interior space free.

Variants
There were many different 'special edition' Renault 4s. Some (including the Safari, Sixties and Jogging) were sold in special colour schemes, upholstery and other details, while others (Clan, Savane) were really nothing more than standard models with decals.

There were also special models which were not solely a marketing exercise, such as the Renault 4 Sinpar 4x4, the Plein Air, a pickup truck, LPG versions and electric versions.

In 1978, the R4 GTL arrived. It had the 1108cc engine from the Renault 6 TL, albeit with the performance reduced for better economy, and bigger drum brakes. The GTL was identifiable by its grey front grille, grey bumpers, and grey rubber strips along the bottoms of the doors. It also had an extra air intake below the front grille (as a result, the registration plate was moved down to the bumper), and 12 inch wiper blades instead of the original 10 inch ones. Inside, there was a modified dashboard and cloth seats.

There was also a panel van version of the R4, which with its "high cube" bodyshell became the idiosyncratic French "Boulangerie" van. For many years, this was surely the most successful vehicle of its type and for many people it represents their idea of a Renault 4 more than the passenger version. It remained on sale in Europe until 1993 and was replaced by the Renault Express, based on the R5.

Though reasons such as emissions and safety legislation are often given for the Renault 4's demise, its popularity would not have lasted anyway. Outmoded production methods, more advanced competition and the reasons outlined above meant that the Renault 4's days were numbered, at least as a mainstream product. In any case, projects to replace the Renault 4 had been in development since the early seventies. However, the continuing success of the Renault 4, the need to replace the Renault 5, the difficulties coming up with a suitable replacement (and the idea that the Renault 4's market would die with it) all meant that the Renault 4's replacement did not appear until 22 years later. When the Renault 4 finally went out of production in the early nineties, a retrospective series of ten black and white photographs by Thierry des Ouches was published in Libération in early December 1992. This series later won first prize from Le Club des Directeur Artistiques in the category of daily newspaper. It was also award the lion d'or at the Cannes International Advertising Festival.

In 2003, a Japanese car modification company called DAMD came up with a design called the Ancel Lapin, which could transform a Suzuki Lapin into a Renault 4 lookalike.
Posted by classic automotives at 7:45 PM 0 comments