The Lotus Europa or Lotus Europe, a two door mid-engined GT coupé built by Lotus Cars from 1966 to 1975.

The original Lotus Europa used Lotus founder Colin Chapman's minimalist steel backbone chassis that was first used in the Lotus Elan, while also relying on its fibreglass moulded body for structural strength. The Europa was the first mass-produced mid-engine road car and was based on a prototype built to compete for Henry Ford II's contract to build a Le Mans race car in the early 1960s.

The Lotus Europa was designed and built to be an embodiment of Chapman's oft-stated philosophy of automotive design: "Simplify, then add lightness."

The 4-wheel independent suspension was typical of Chapman's thinking; the rear suspension consisted of two relatively large trailing arms, one lower locating link per side, and the axles were used as upper locating links; very similar to Formula racing car designs of that era. Aside from the doors, bonnet (hood), and trunk (boot), the body was cast as a single unit of fibreglass.

The car's handling prompted automotive writers to describe the Europa as the nearest thing to a Formula car for the road.

Series 1
The Series 1 or S1 Europa (also known as Lotus Type 46) was announced for sale to European markets on December 20, 1966. The first cars were delivered in France in February 1967, sold as Lotus Europe. The S1 was fitted with a modified Renault 16 1470 cc engine and a 4-speed gearbox. The engine was a special 82 hp (61 kW) version (as opposed to the 52 hp (39 kW) generated in standard form). Lotus turned the engine and gearbox through 180° to accommodate the Europa's longitudinal mid-engined layout, inverting the gearbox's crown wheel and its pinion gear to avoid having four reverse gears. The S1 weighed 686 kg (1512 lb), had a top speed of 110 mph (180 km/h), and did 0-60 mph in 10 seconds. Of particular note, nearly 0.9 g (8 m/s²) lateral acceleration was achieved on road tires of that era.

Type 47
During 1966, whilst the Factory was sorting out the first production Type 46 (S1), Team Lotus raced the Type 47, a Europa modified for the track, with a 165 hp (123 kW) 1594 cc Lotus/Ford/Cosworth twin cam engine, which used a Cosworth-modified Kent block, and a Hewland FT 200 5-speed gearbox. The Type 47 is fondly remembered for taking both first and second places (driven by John Miles and Jackie Oliver, respectively) in its very first race held at the storied Brands Hatch race course on Boxing Day. It's believed that 55 Type 47s were built by Lotus between 1966-70. Two other sports racer prototypes based on the Europa called, Type 62, were built in 1969. A twin-cam powered Europa would not be available to the roadgoing public until the Type 74, in 1971. Replica 47s are bespoke-manufactured by Banks Europa Engineering, in several variations. A one-off 47, fitted with a Rover V8 engine, was built by GKN in 1968 and registered, GKN 47 D.

Series 2
The Europa S2, or Type 54, was introduced in April 1968. It used the same Renault engine as the Type 46, but offered a number of refinements, including electric windows, fully adjustable seats, a new interior, and a polished wooden facia for the dashboard. Per request of the automotive insurance industry, Lotus switched to bolt fasteners (instead of resin bonding) to attach body to frame. A red Type 54 Europa S2 was driven by co-star Linda Thorson in several 1968 episodes of The Avengers (TV series). A small number of Type 54s were modified to be "federalized", that is, made suitable for export to the United States.

Twin Cam and Special
In 1971, the Type 74 Europa Twin Cam was made available to the public, with a 115 hp (78 kW) 1558 cc "big valve" Lotus-Ford Twin Cam engine (105 hp US Federal emissions control version until the end of production), a new Renault 4-speed gearbox (Type 352) and a re-designed bodyshell to improve rearward visibility. Mike Kimberley, who rose to become chief executive of Group Lotus, then a new engineer at Lotus, was appointed Chief Engineer of the Europa TC project. 1,580 cars were shipped as Europa Twin Cam before Lotus switched to a 126 hp (94 kW) aspirated by Dellorto/Weber carburettors version of the same engine; in addition to offering a new Renault 5-speed (Type 365) gearbox option; and renamed the car Europa Special. It weighed 740 kg (1631 lb), had a top speed of 123 mph (198 km/h), did 0-60 mph in 7.0 seconds, and ran the 1/4mile in 14.9 sec. A total of 3,130 Specials were manufactured. To honour Team Lotus's 1972 and 1973 F1 World Championships, a few black with gold pin stripe - plus numbered badge - Europa Specials were offered as the first ever John Player Special commemorative motor vehicles.
Posted by classic automotives at 4:44 PM 0 comments

Email ThisBlogThis!Share to TwitterShare to FacebookShare to Pinterest
Labels: 1965, Lotus 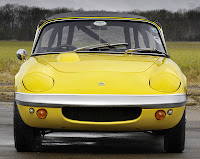 The original Elan was introduced in 1962 as a roadster, though an optional hardtop was offered in 1963 and a coupé version in 1965. It was the first Lotus road car to use the now famous steel backbone chassis with a fibreglass body. At 1500 lb (680 kg), the Elan embodied the Colin Chapman minimum weight design philosophy. Initial versions of the Elan were also  as a kit to be assembled by the customer. The Elan was technologically advanced with a twin-cam 1558 cc engine, 4-wheel disc brakes, and 4-wheel independent suspension. The Lotus-Ford Twin Cam engine was based on Ford's Kent, with a Lotus-inspired Cosworth alloy twin-cam head. This Lotus-Ford 4-cylinder engine would go on to be used in a number of Lotus production and racing models. An Elan +2 was introduced in 1967 with a longer wheelbase and two more rear seats. The Elan ceased production in 1973 and the Elan +2 in 1975. An estimated total of 17,000 original Elans and Elan +2's were built. Because of its successful design and technological sophistication, the Elan went on to become Lotus' first commercial success, reviving a company stretched thin by the more exotic and less commercially successful Elite, and enabling funding of the Lotus success in racing over the next ten years.

The generation of the 2 seater Elan was famously driven by the character Emma Peel on the British television series The Avengers. In 2004, Sports Car International named the Elan number six on the list of Top Sports Cars of the 1960s. The original version of the car was designed by Ron Hickman, who also designed the first Lotus Europa as part of Lotus' GT40 project bid and made his fortune having designed the Black & Decker WorkMate.
Posted by classic automotives at 4:09 PM 0 comments