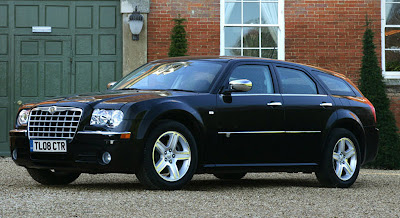 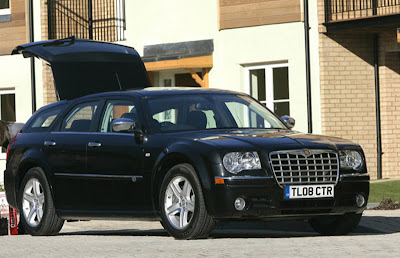 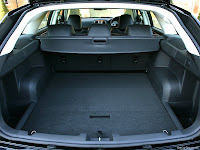 The Chrysler 300C Touring is simply the most striking estate car on the road today. For 2008 Chrysler will make the 300C stand out even more - with a revised exterior and an updated interior across the range. Chrysler will also launch an entirely new Touring model in the UK - the diesel-powered 'SRT-Design'.

The exterior of the Chrysler 300C has been refreshed for 2008 with changes to the rear fascia and rear light clusters. The interior design has been enhanced with a new instrument panel and centre console design, highlighted with satin silver bezels. Soft touch surfaces on arm rests and door panels add to the comfortable interior while the new dark interior colour adds to the sophisticated feel. A new ignition key with one-touch start-up, a fully adjustable steering wheel as well as LED lighting in the front cup holders and front and rear door pockets all provide additional driver convenience.

In addition, seat-mounted air bags have been added to the front and side-curtain air bags to the rear for increased driver and passenger safety.

The Chrysler 300C Touring SRT-Design model includes all of these refinements and adds many of the visual enhancements that make the high-performance SRT-8 such a crowd pleaser. The SRT-Design is available as a Saloon or a Touring and features the economical 3.0-litre V6 diesel engine. SRT-Design features include SRT 20- inch alloy wheels, wheel arch spats and SRT-8 body kit as well as a chrome mesh grille. Inside, the SRT-Design gets MyGIG satellite navigation as standard as well as an SRT-8 steering wheel, SRT-8 leather sports seats and carbon fibre interior details.

Simon Elliott, Managing Director of Chrysler UK Ltd, said: "The 300C Touring offers a lot of family-friendly cargo space still manages to deliver with its on-road performance and great value for money. We have sold more than 6,000 cars since the launch in 2005 and this means the 300C has been a huge success story for Chrysler in the UK. We have struggled to keep up with customer demand since launch and this sustained popularity has helped make sure that it has maintained a very health residual value and this bodes well for our future success.

Email ThisBlogThis!Share to TwitterShare to FacebookShare to Pinterest
Labels: 2008, Chrysler 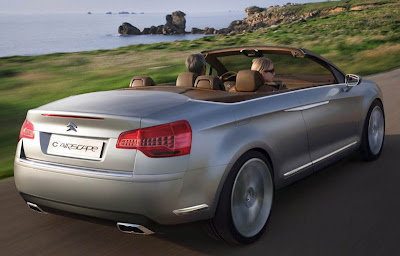 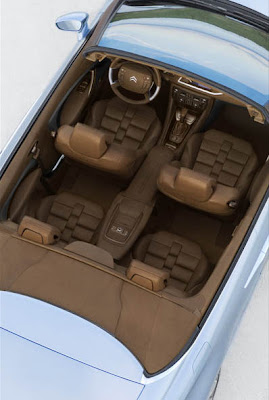 Citroen is unveiling C5 Airscape at the 2007 Frankfurt Motor Show. This exceptional concept car is a new take on the most beautiful of vehicles, the cabriolet.

C5 Airscape features powerful, dynamic exterior styling and an interior of exclusive design, made for driving pleasure and the comfort of three passengers. The original mechanism of the folding roof underlines the overall sophistication of design.

Styled for maximum appeal, C5 Airscape also delivers maximum performance. New-generation Snow Motion traction control provides a level of traction close to that of a four-wheel drive. Other useful features are provided by the UrbanHybrid system. This unit prevents noise and vibration when the engine stops and boosts engine torque when needed. At the same time, it shows real respect for the environment.

An expression of power and elegance
C5 Airscape is a car to turn heads. Its elegant proportions and sleek bodywork convey a sense of performance with a promise of power. The innovative folding top is an invitation to climb on board and take to the road. The interior layout, with its premium materials, delivers the highest standards of on-board comfort for the driver and all the passengers

Power and sophistication
A car of elegant lines, C5 Airscape conveys an impression of strength and sophistication, with its cleanly drawn body lines and ribbing at the top. The powerful look of the body is brought out by the raw, intense grey of the bodywork. This colour, whose intensity varies according to the light, gives C5 Airscape an elegant and precious look, consolidating its status as an executive vehicle.

The powerful design of the front and rear ends highlight the on-road stance of C5 Airscape. The high-positioned rear lights extend the waistline and optimise the vehicle's dynamic looks. At the same time, a double chrome tail pipe underlines the car's luxurious design as does the concave rear window, which clearly identifies C5 Airscape as belonging to the family of large Citroen saloons.

The sophistication of C5 Airscape can also be seen in the original design of the folding roof, whose glazed upper part lets light flood into the cabin. Made entirely of carbon, this roof opens and folds away simply, without detracting from the looks of the concept car. It folds away automatically, without assistance, and without the driver having to open the upper part of the roof storage area in the boot. C5 Airscape reflects the purest traditions in vehicle design in that the metal-look roof with its textile lining resembles a roof made of canvas - the emblematic signature of executive cabriolets.

Leisure and sophistication
Fully upholstered in dark brown leather, the cabin of C5 Airscape conveys an appealing impression of sophistication. The particularly well designed seats suggest luxury and precision. The central section of the seats brings to mind the links of a watch strap, while the decorative stitching on the edges of the seats reinforces the taut, well-muscled look of the whole. To add the finishing touch to the executive design of the interior, the gear lever knob is set with leather and chrome. The chrome echoes the metal strip underlining the air conditioning controls and central console.

The design of the driving position on C5 Airscape was also dictated by the pursuit of driving pleasure. Refinement is the key word for the driver's surroundings, as reflected in the specific design of the instruments and their layout.

The driving position features a fixed-centred controls steering wheel that brings the main comfort functions and driving aids (navigation, radio, cruise control and speed limiter, on-board computer) within easy reach. Considered as points of contact, the pushbuttons feature an original covering resembling the texture of skin. They create a strong, fast-reacting sensory interface between the vehicle and the driver.

The sophisticated design of the instrument cluster on C5 Airscape reflects the requirements of optimised ergonomics and ensures that information is laid out legibly. The three dials feature annular needles, symbolising an advanced level of technology. The needles run around rather than across the dial for greater legibility and a more attractive design.

The air vents next to the dials underline this cabriolet's powerful character, as does the upper part of the instrument cluster, which takes the form of an air intake as on a competition car. The overall effect is enhanced by the clean, sculpted design of the dashboard. Its straight lines symbolise precision, while the soft curves symbolise dynamic performance. This configuration contributes to full driver control and exceptional driveability.

Driving sensations and improved respect for the environment
Styled for maximum appeal, C5 Airscape also delivers maximum performance. This concept vehicle is equipped with a V6 HDi engine associated with a particulate filter and able to run on biodiesel, along with an innovative Snow Motion traction control system for a performance close to that of a four-wheel drive, and UrbanHybrid technology for low fuel consumption and CO2 emissions. As a result, C5 Airscape boasts remarkable levels of performance that show real respect for the environment.

In Drive mode, when this concept vehicle is travelling at under 6 kph and the driver's foot is on the brake pedal, the engine cuts out. For maximum driveability, it starts again instantly and automatically as soon as the driver releases the brake pedal. When the car is at a standstill, fuel consumption is zero and CO2 emissions are around 24 g over a combined cycle. Further, the onboard network (air conditioning, radio etc.) is powered by energy recovered during the deceleration and braking phases. This brings savings in fuel consumption and eliminates additional pollutant emissions.

Engine torque can be temporarily boosted, when overtaking for example, for a high-speed take-off.
When the car is at a standstill, the UrbanHybrid system prevents noise and vibration in the cabin, for the comfort of both passengers and passers-by.

Driveability and performance in all circumstances
The executive positioning of C5 Airscape is reflected by the presence of the 208 bhp 2.7 V6 HDi engine and particulate filter. Combining power and fuel economy, this engine develops 150 kW EEC (208 bhp DIN) at 4,000 rpm for torque of 440 Nm at 1,900 rpm. Right from the lowest speeds, it delivers smooth, gradual power with exceptional operating comfort. Driveability is further increased by a 6-speed automatic gearbox.

To deliver a high level of performance and improve active safety, C5 Airscape features Snow Motion, an innovative traction control system with extended functions. This system offers remarkable performance in terms of vehicle traction and "take-off" on surfaces with low grip, such as snow for example. The benefits, already significant with conventional tyres, are further increased when the concept car is shod with winter tyres. In this configuration, the performance of C5 Airscape is close to that of a four-wheel drive.

Taking the wheel of C5 Airscape is a total and continuous experience in driving pleasure. This is a car that brings leisure within easy reach.
Posted by classic automotives at 6:33 PM 0 comments

Email ThisBlogThis!Share to TwitterShare to FacebookShare to Pinterest
Labels: 2007, Citroen 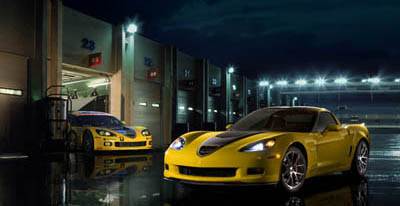 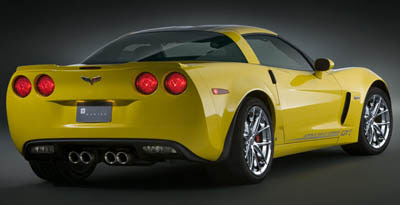