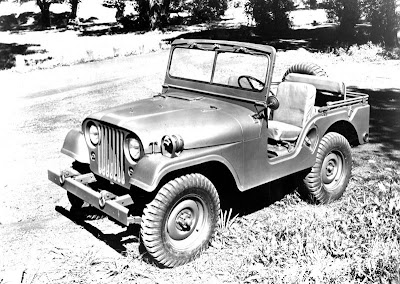 Email ThisBlogThis!Share to TwitterShare to FacebookShare to Pinterest
Labels: 1955, Jeep 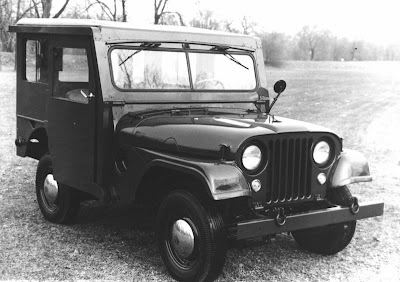 Jeep Dispatcher, 1955
Posted by classic automotives at 4:05 AM 0 comments

Email ThisBlogThis!Share to TwitterShare to FacebookShare to Pinterest
Labels: 1955, Jeep 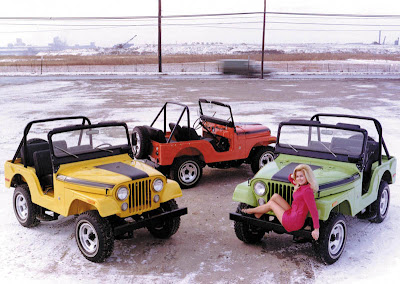 In 1955, Kaiser introduced the CJ-5, based on the 1951 Korean War M-38A1, with its rounded front-fender design. It was slightly larger than the Jeep CJ-3B, as it featured an increased wheelbase and overall length. Improvements in engines, axles, transmissions and seating comfort made the CJ-5 an ideal vehicle for the public's growing interest in off-road vehicles.

The Jeep CJ-5 featured softer styling lines, including rounded body contours. A long-wheelbase model was introduced and was known as CJ-6. Apart from a longer wheelbase, the CJ-6 was almost identical to the CJ-5. Jeep also introduced a forward-control cab-over-engine variation to the CJ line in 1956.

The Jeep CJ-5 had the longest production run of any Jeep vehicle, from 1954 to 1984. In the 16 years of Kaiser ownership, manufacturing plants were established in 30 countries, and Jeep vehicles were marketed in more than 150 countries.

In 1965, a new "Dauntless" V-6 engine was introduced as an option on both the 81-inch wheelbase Jeep CJ-5 and 101-inch wheelbase CJ-6. The 155-horsepower engine almost doubled the horsepower of the standard four-cylinder engine. It was the first time a Jeep CJ could be equipped with a V-6.
Posted by classic automotives at 4:04 AM 0 comments