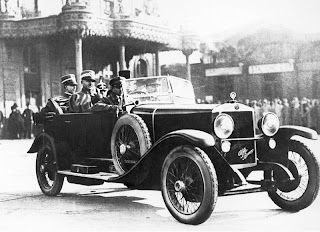 Alfa Romeo RL was produced between 1922-1927, it was Alfa's first sport model after World War I. Car was designed in 1921 by Giuseppe Merosi. Car had straight-6 engine with overhead valves. Three different versions was made: Normale, Turismo and Sport. RLTF (Targa Florio) was race version of Alfa Romeo RL and it weighted half of normal versions, engine had seven main bearings instead of four and double carburetos. In 1923 Alfa race team had drivers like Ugo Sivocci, Antonio Ascari, Giulio Masetti and Enzo Ferrari. Sivocci's car had green cloverleaf symbol on white background and when he won Targa Florio 1923, that symbol was become Alfa's good luck token to the team.

Read more »
Posted by classic automotives at 7:40 AM 0 comments

Email ThisBlogThis!Share to TwitterShare to FacebookShare to Pinterest
Labels: 1947, Saab 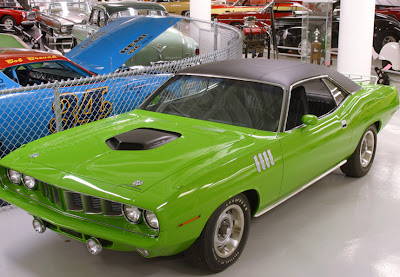 As 1970 rolled around, another redesign was in order for the Barracuda. The performance version was badged and advertised as the 'Cuda. This year's new design looked quite a bit different from the previous models. One of the reasons was that it was now built on a new, slightly shorter, wider, and sportier version of Chrysler's existing B platform, the E-body. This new generation eliminated the fastback, but kept the two-door coupe and convertible versions. It also had a Dodge near-twin known as the Challenger; however, not one body panel interchanged between the two cars and the Challenger had a slightly longer wheelbase. Both were aggressively and cleanly styled, although they were clearly influenced by the first-generation Chevrolet Camaro. After the switch to the E platform, which featured a larger engine bay than the previous A-body, Chrysler's famous 426 in³ (7.0 L) Hemi would now be available from the factory in the Barracuda. The HemiCuda had about a factory rating of 6 MPG, and was sold without warranty.
Read more »
Posted by classic automotives at 9:52 AM 0 comments