Tadek Marek had finely re-designed the 3-litre engine. The standard DBA version of this engine had a stiffer crankshaft, a new block, oil pump and timing chain, new exhaust and induction manifolds, the ports were based on the Aston Martin DB3S engine, larger valves, high lift camshafts (after the first 150). With the same capacity (2,922cc) twin SU carburettors and compression ratio (8:16:1) as the VB6J engine, the improved breathing provided an output claimed to be 162 bhp at 5,500rpm.

The main change in the appearance of the car was the adoption of the elegant shape of the radiator opening from that of the DB3S and the consequent compound curves of the front of the bonnet, which can be traced on all subsequent models, including the V8. Inside, the main difference was a completely different facia and instrument panel (which remained in use until the Aston Martin DB6 Mark II was dropped in 1970). In 1959, for the first time, automatic transmission (Borg Warner) was offered (as an extra) for a production Aston Martin; it was installed only in four drophead coupes and one saloon.

Launched in late 1999 was the Arnage Red Label. Volkswagen, who had purchased the Bentley name and Crewe factory was loathe to continue purchasing BMW's engines, and it turned out that Bentley engineers and customers felt the same way. The BMW-powered Arnage, while objectively more modern than the Turbo RT it replaced, was more than a second slower to 60 mph than that car, and lacked the massive torque that Bentley customers had grown accustomed to.

Vickers had outsourced to Cosworth the production of the old 6.75 L Rolls-Royce engine for use in the continued Continental and Azure models, so reverting to the old standby engine was a natural choice for the company. In fact, Volkswagen purchased Cosworth as well, so all the pieces fell into place to eliminate the BMW engine.

The Red Label model reverted to the old V8, which boasted torque of 835 N·m with a single Garret T4 turbocharger. This was the greatest amount of torque for a four-door car at the time. Also returning was the General Motors-sourced 4-speed 4L80-E automatic.

A long-wheelbase version of the Red Label was launched at the Detroit Auto Show in 2001, and the Green Label ended production. The Red Label models were replaced in 2002.
Posted by classic automotives at 5:21 AM 0 comments

Email ThisBlogThis!Share to TwitterShare to FacebookShare to Pinterest
Labels: 2000, Bentley 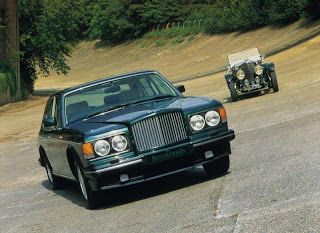 The Brooklands continued Bentley's relatively angular design scheme which was used on both, Rolls-Royce as well as Bentley vehicles, throughout the 1980s and early 1990s. The exterior design featured the classic Bentley waterfall grille as well as dual headlights with wrap-around parking lights. As in many Bentley and Rolls-Royce vehicles the Brooklands also featured the trademark descending trunklid and chrome B-pillars.

Technical specifications
The Bentley Brooklands was driven by a 6.7 L V8 with a 4-speed automatic transmission. The vehicle was rear wheel drive and featured independent front and rear suspension. While not as large as some other Ultra-luxury sedans, the Brooklands remained quite large with an overall length of 211.4" and 214.5" wheelbase (207.4" and 120.5" in SWB trim).
Posted by classic automotives at 5:18 AM 0 comments