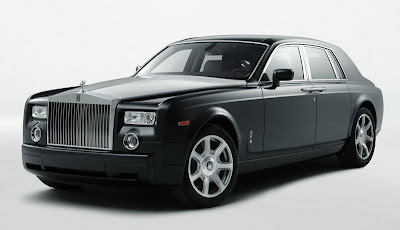 The Rolls-Royce Phantom Tungsten is featured in the Bespoke Collection. The bonnet has a dramatic brushed aluminium finish, which contrasts elegantly with the bodywork, painted in Darkest Tungsten - a colour never used before on a production Rolls-Royce.

Email ThisBlogThis!Share to TwitterShare to FacebookShare to Pinterest
Labels: 2008, Rolls-Royce 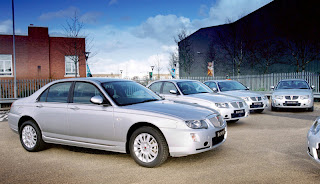 The established appeal of the Rover 75 range - with its unrivalled reputation as the definitive luxury premium Upper Medium saloon is further enhanced by the addition of the "Contemporary" derivative theme, providing a younger, more modern interpretation of traditional Rover values. Other features include a selection of new alloy wheel designs and options like Personal Assist - Smartnav voice navigation and concierge service.

The exterior has the clean lines of the sharper-edged Rover 75 design to capture a fresh spirit of style with a larger and more prominent Rover grille, complemented by a new headlamp design incorporating standard fit halogen projector units. The style of Rover 75 has been updated to offer cleaner, more progressive lines without jeopardising the integrity of the original design, widely regarded as one of the most beautiful cars in the world.

Rover 75 Saloon and Tourer already possess one of the most admired interiors in the motoring world. With the introduction of the Classic, Connoisseur and Contemporary variants this interior is now available in three distinctive identities. In particular,

Contemporary models offer an entirely new and progressive interior based around a new black oak wood finish. This provides a distinctive, younger and more continental flavour to the cabin. Full leather seat trim is standard on SE derivatives of both Connoisseur and Contemporary models.

For security and peace of mind, superlocking disables door and tailgate lock releases and sophisticated electronic networks stand ready to trigger the alarm. Highly convenient 'plip' operated remote unlocking of the boot or tailgate is now available on all derivatives, while a robust engine immobiliser and remote control with a continuously changing security code complete the anti-theft defences.
Posted by classic automotives at 9:01 PM 0 comments

Email ThisBlogThis!Share to TwitterShare to FacebookShare to Pinterest
Labels: 2004, Rover 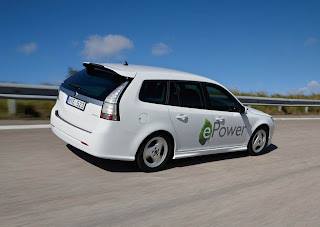 Saab Automobile is taking its first step towards developing an all-electric vehicle with the Saab 9-3 ePower. Making its public debut at the 2010 Paris Motor Show, the Saab 9-3 ePower is the prototype for a test fleet of 70 vehicles which will participate in extensive field trials in Sweden in early 2010.

The performance of the cars will be evaluated under a variety of real world driving conditions as part of the development process for a purpose-built, electric Saab vehicle. Targets to be verified include a projected driving range of approximately 200 kilometers through the use of high density energy storage in lithium-ion battery cells.

The Mid-sized sports combi with zero emissions
The Saab 9-3 ePower is the first all-electric car to offer its occupants the comfort and size of a wagon bodystyle. Saab engineers have integrated an electrical architecture within the shape and dimensions of a 'conventional' Saab 9-3 SportCombi.

Under the hood is a 135 kW/184 hp electric motor driving the front wheels through a single-speed transmission. Instant torque enables zero to 100 km/h acceleration is just 8.5 seconds, together with a top speed of 150 km/h.
The compact yet powerful 35.5 kWh lithium-ion battery pack is accommodated in a modified floor-pan, mainly in space within the car's wheelbase previously occupied by the exhaust system and fuel tank. This enables an optimum weight distribution and excellent driving dynamics similar to those of a standard SportCombi.

Inside the cabin, a conventional, automatic-style gearshift lever provides selection of 'drive', 'neutral', 'park' and 'reverse'. The rev-counter, fuel and turbo boost displays in the main instrument cluster are replaced by read-outs for battery status, power consumption and driving range, all illuminated in green. To optimize space, an electric park brake is fitted.

Electro-hydraulic power steering is used and the cabin is equipped with full air conditioning, via a compressor powered by the battery pack. A separate 12-volt battery, for the lights and cabin ancillaries, is also charged from the battery pack via a current transformer
The operation of the vehicle's powertrain is controlled by a version of Saab's own in-house Trionic 8 engine management system, with new software written for an electric vehicle application.

The battery pack has a capacity of 35.5 kW/h and is designed to operate with full power in ambient temperatures as low as -30ºC, at least 10ºC below the operating level of other battery packs on the market today. Another key benefit is the use of air, instead of liquid, cooling which contributes to lower cost and further weight-saving in the pack's design.

The pack is intended to support re-charge cycles equivalent to about ten years average use. It can be fully recharged from a domestic mains supply in about three to six hours, depending on depletion status. Charging times can be greatly reduced if the voltage of the electrical feed is raised, as there is no limitation on the battery's input capacity.

Test driving experience is expected to validate the performance of this advanced battery pack, which is designed to operate reliably within a full depletion 'buffer' set at only 12 percent of total capacity, a much lower operating margin than used in the management of other packs.
Its lithium-ion battery cells are also the first to receive a Nordic Ecolabel accreditation for their environmental safety and sustainability, which includes manufacturing processes.

The Saab 9-3 ePower meets the high crash worthiness standards that Saab applies to all its vehicles. The car's power pack is located outside the occupant compartment in non-deformable structural zones, well protected and encapsulated. The battery management and monitoring system supports safe performance during normal driving and in crash conditions.

Extensive user trials
Hundreds of drivers and their families will be enlisted by Saab and its development partners during a extensive test driving and evaluation program involving a 70-strong fleet of Saab 9-3 ePowers in central, west and eastern Sweden during 2011-12.

The Saab ePower project team in Trollhättan will monitor the performance of the cars across a wide variety of usage patterns and driving conditions. To log essential component data, all vehicles will be equipped with aircraft-style, black box recorders.
Posted by classic automotives at 8:58 PM 0 comments