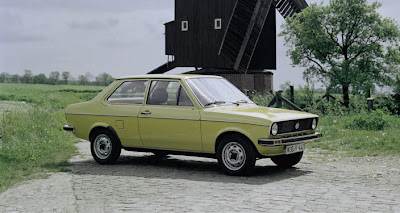 The Mk I Polo, a rebadged version of the Audi 50, was introduced in 1975. The differences between the Audi and VW models were minor, with the Polo being cheaper and much more basic. The two cars were initially sold along side each other, but the Audi 50 never sold as well, and was withdrawn in 1978. The Polo was manufactured at the Volkswagen plant in Wolfsburg. In 1977, the Derby sedan was released, which was simply a Polo, identical to the hatchback from the C-pillar forward, with a large boot attached (an old Audi proposal, but never sold by this brand).

When first on sale the range topping car, the LS model, featured the 50 PS (37 kW) 1043 cc engine found in the Audi 50. Other specifications included parking lights, rear wash wipe, sun visors, chromed bumpers and 4.5J X 13" wheels. The N model was the basic starting spec lacking many of the features of the LS. In 1979 the GLS was introduced, replacing the LS as the range-topping car; specification upgrades included chrome headlight and grill surrounds, sunroof, a cigarette lighter and chrome wheel trims.

895 cc, 1093 cc and 1272 cc engines were used, with the smaller one used only in the Polo hatchback, and the 1272 cc only in the Derby, Audi 50, and the rare Polo GT. Different levels of compression were used on each size to achieve different power outputs, and the variations are numerous, often differing depending on the country of sale, ranging from 35 to 60 PS (26 to 44 kW).

Mk IF (1979-1981)
The Mk I Polo and Derby were facelifted in 1979 (Mk IF) with plastic bumpers, a different front grille and a revised dashboard. The round headlights of the Derby were replaced with square ones, bringing it inline with the similar Golf-based Jetta sedan.

Further models were added including CLS, S and an out run LX model. The Mk I's production run finally ended in October 1981 with over 500,000 Polos sold worldwide.
Posted by classic automotives at 3:13 AM 0 comments 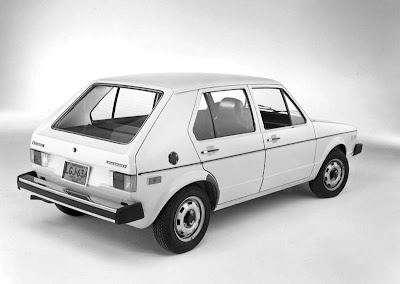 The Volkswagen Rabbit GTI, the North American version of the high-performance Golf GTI, debuted in the 1983 model year and was in production for two seasons. Assembled from parts made in Mexico, Canada, Germany and the U.S. in Volkswagen's Westmoreland, Pennsylvania assembly plant, the Rabbit GTI had the same Mk1 chassis, and the same A1 body type as the Mk1 Golf GTI that had been on sale in Europe since 1976, with a few exceptions. Key distinct features of the Rabbit GTI were its GTI surname, the squared front end styling, blue or red felt and leatherette trim, and its alloy "snowflake" wheels. The squared styling of the front end, particularly the wraparound blinkers, gave it added safety and slight improvement in performance. Under the hood, the engine was a JH 1.8 liter 4-cylinder engine that ran on unleaded petroleum fuel. The JH 1.8l was transversely mounted, and it would peak in stock condition at around 80-85 HP. Claims to gas mileage of near-perfectly tuned Rabbit GTIs range between 25 and 30 miles per gallon.

Note that the Rabbit GTI first appeared in Canada in 1979 with the 1.8l engine and 5spd transmission. It was initially available in red, white and black.
Posted by classic automotives at 3:13 AM 0 comments 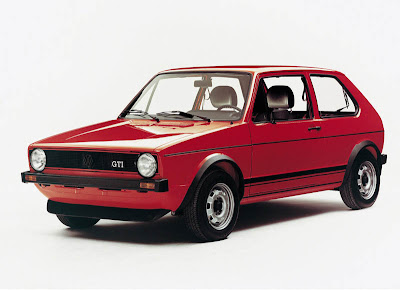 The first Golf began production in 1974. Marketed in the United States and Canada from 1975 to 1984 as the Volkswagen Rabbit and in Latin America as the Volkswagen Caribe, it featured the water-cooled, front wheel drive design pioneered by the Citroën Traction Avant in 1934 with the addition of a hatchback pioneered by the Renault 4 in 1961. The Golf was Wheels magazine's Car of the Year for 1975. The name is short for Golf-Strom, German for Gulf Stream; it was named for that oceanic current to reflect its international character. It was originally named the Rabbit in North America and the Caribe in Latin America, ironically, because marketers decided that no one in the Western Hemisphere would understand the European name.

While the Golf was not the first design with this layout (earlier examples being the Austin and Morris Mini of 1959, the Austin Maxi in the late 1960s and the Fiat 128 3P of the early 1970s), it was very successful, especially since it married these features with Volkswagen's reputation for solid build-quality and reliable engineering.

The Golf was designed by Italian automobile architect / designer Giorgetto Giugiaro, of the ItalDesign design studio. A version of this original Golf model, known as the Volkswagen CitiGolf, is still produced in South Africa as an entry level car.

In 1978, Volkswagen commenced producing the Rabbit version of the Mk1 Golf in Westmoreland County, Pennsylvania, thus becoming the first European car manufacturer in modern times to produce a vehicle in the United States. Former Chevrolet executive James McLernon was chosen to run the factory, which was built to lower the cost of the Rabbit in North America by producing it locally. Unfortunately, McLernon tried to "Americanize" the Rabbit by softening the suspension and using cheaper materials for the interior. VW purists in America and company executives in Germany were displeased, and for the 1983 model year the Pennsylvania plant went back to using stiffer shocks and suspension with higher-quality interior trim. The plant also began producing the GTI for the North American market. (Rabbits were built in Pennsylvania through 1984.) The first VW Caddy pick-up, based on the Mk1 Golf, was also created at the Pennsylvania plant.

The GTI version, launched in Europe in 1976 and in the US in 1983, virtually created the hot hatch genre overnight, and many other manufacturers since have created special sports models of their regular volume selling small hatchbacks. It was one of the first small cars to adopt fuel injection for its sports version, which raised power output of the 1588 cc engine to 110 PS (81 kW/108 hp). In 2004, Sports Car International announced the GTI Mk I as the 3rd best car of the 1980s. In the United States, the Mk1 Golf GTI was known as the Rabbit GTI.

There was a minor facelift in 1980 for North American versions only, which saw the adoption of larger rear lamp clusters (more in line with Guigiaro's original concepts), larger bumpers, square headlights and a new dashboard with a more modern-looking instrument display.

The convertible version, named the Cabriolet, was sold from 1980 to 1993 (a convertible version of the Golf II was not made, so the Mk1 cabrio with slight modification was produced until the introduction of the Mk III cabrio). It had a reinforced body, transverse roll bar, and a high level of trim. The A1 Volkswagen convertible is of unibody construction built entirely at the factory of Karmann, from stamping to final assembly; Volkswagen supplied the engine, suspension, interior, etc. for Karmann to install. The vinyl tops were insulated and manually operated, with a glass rear window.
Posted by classic automotives at 3:12 AM 0 comments