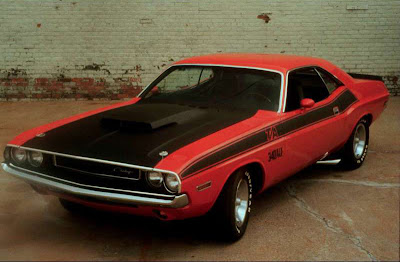 The first Challenger was the division's late entrant to the pony car market segment in the United States, launched for the 1970 model year.

It was strongly based on the similar Plymouth Barracuda's new E-body but with two inches (51 mm) of extra wheelbase and somewhat different outer sheetmetal. Exterior design was done by Carl "CAM'" Cameron, whom also did the exterior for the 1966 Dodge Charger. For the 1970 Challenger grille, CAM' based it off of an older sketch of his of a 1966 Charger prototype that was designed to have a turbine engine. The Charger never got the turbine, but the Challenger got that car's grille. Although the Challenger was well-received by the public (with 80,000 sales in 1970 alone), it was criticized by the press, and the pony car segment was already declining by the time the Challenger arrived. Challenger production ceased after the 1974 model year, only having lasted five years; performance dropped off dramatically after the 1971 models. About 165,500 Challengers were sold over this model's lifespan.

Challengers could either be hardtop coupes or convertibles (through 1971 only). The performance model was the R/T (Road/Track), available in both body styles; both standard and R/T hardtops could be ordered as the more luxurious SE specification, which included leather seats, a vinyl roof and a smaller 'formal' rear window. The convertible Challnger was only available as an R/T in 1970. In 1972, Dodge dropped the R/T badging and now called it the "Rallye". Other options, as well as engines and a manual transmission, included steeper rear axle ratios, a limited-slip differential, and a shaker hood scoop were gone for 1972.

A 1970-only model was the Dodge Challenger T/A (Trans Am) racing homologation car, which used a specially tuned Six-Pack version of the 340 in³ (5.6 L) engine, topped with a giant hood scoop on a fiberglass hood. 'Megaphone' exhaust outlets were fitted in front of the rear wheels. These cars came standard with front and rear sway bars to enhance handling. Unusually, different-sized wheels were fitted front and back, with very fat rubber on the rear. The T/A also came with a rear ducktail spoiler and front ground effect spoilers as standard equipment.

Although the body style remained the same throughout the 5 year run, there were two notable changes to the front grille. 1971 models had a more stylized "split" grille, and the final manipulation coming in 1972, with the incorporation of the "sad-mouth" design. With this change to the front end, 1972 through 1974 models had little to no variation. The only way to properly distinguish said models is by the front and rear "bumperettes" which exponentially increased in size during each consecutive year. These changes were made to meet US regulations regarding crash test safety.

The 1970 taillights went all the way across the back of the car, with the backup light in the middle of the rear. In 1971, the backup lights were on the left and right instead of the middle. The taillight array also changed for 1972 onwards, with the Challenger now having four individual lamps similar to the mid-size Mercurys of the time.

Collector's value
As the Chrysler E-body line reaches legendary proportions, so too do the prices to buy them. 1970 and 1971 models tend to generate more attention from potential (and usually deep pocketed) buyers, as the performance and style options had not yet been toned down. However, with the popularity of these vehicles on the increase, coupled with the number of useable and restorable Challengers being on the decrease, many collectors have begun looking towards the later models to create their own customizable dream machines. Indeed, many "clones" of the more visceral 1970 and 1971 Challengers have been created by using 1972 through 1974 donors; The front and rear grilles/bumpers on these vehicles are easily interchangeable. However, the tail panel is not so easy to change, since the 1970 and 1971 tail panels are quite different from the 1972 to 1974 models.
Posted by classic automotives at 2:19 AM 0 comments

Email ThisBlogThis!Share to TwitterShare to FacebookShare to Pinterest
Labels: 1970, Dodge 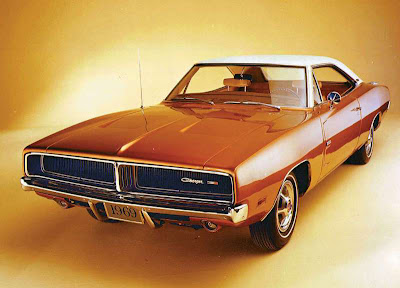 There have been a number of vehicles bearing the Charger nameplate, but the name has generally denoted a performance model in the Dodge range. The 1966 to 1974 Chargers were the high performance B-body models. The 1975 to 1978 Chargers were based on the Chrysler Cordoba.

1969
In 1969 not much was changed for the popular Charger. Exterior changes included a new grille with a center divider and new longitudual taillights. A new trim line called the Special Edition (SE) was added. This could be available by itself or packaged with the R/T, thus making an R/T-SE. The SE added leather inserts to the front seats only, chrome rocker mouldings, a wood grain steering wheel and wood grain inserts on the instrument panel. A sunroof was added to the option list as well, and it would prove to be a very rare option. The bumble bee stripes returned as well, but were changed slightly. Instead of four stripes it now featured one huge stripe framed by two smaller stripes. In the middle of the stripe an R/T cutout was placed. If the stripe was deleted, then a metal R/T emblem was placed where the R/T cutout was. Total production dropped slightly to around 85,680 units. But in 1969 Dodge had its eye on NASCAR and in order to compete it would have to create two of the most rare and desirable of all Chargers: Charger 500, and the Charger Daytona.

The television series The Dukes of Hazzard (1979-1985) featured a 1969 Dodge Charger R/T that was named The General Lee, often quoted as the most recognizable car in the world. "The General" sported the Confederate flag painted on the roof and the words "GENERAL LEE" over each door. The windows were always open, as the doors were (allegedly) welded shut. The number "01" is painted on both doors. Also, when the horn button was pressed, it played the first 12 notes from the de facto Confederate States anthem "Dixie's Land". The muscle car performed spectacular jumps in almost every episode, and the show's popularity produced a surge of interest in the car. The show itself purchased hundreds of Chargers for stunts, as they generally destroyed at least one car per episode. (Real Chargers stopped being used for jumps at the end of the show's sixth season, and were grudgingly replaced with miniatures.)
Posted by classic automotives at 2:19 AM 0 comments

Email ThisBlogThis!Share to TwitterShare to FacebookShare to Pinterest
Labels: 1969, Dodge

NASCAR in 1969 stipulated that any car raced in their series had to be available for sale and must build a minimum of five hundred for the general public. Since the Charger 500 was not fast enough, Dodge went back into the wind tunnel and created one of the most outrageous and most sought after Chargers, the 1969 Dodge Charger Daytona.

The Daytona used a pointed nose piece that added 18 inches into the front of the car. This gave the car the downforce that the engineers were looking for, but the rear end still tended to lift at speed. To solve this, they mounted a large wing over the trunklid which would give the Charger Daytona and its sister car, the 1970 Plymouth Superbird, the nickname of "wing cars". The wing was 23 inches tall so that the trunk could be open without hitting the bottom of the wing. Slightly modified fenders and a hood from the upcoming 1970 Charger were used on the Daytona. Rear facing scoops were added to the front fenders, right above the tires, which mimicked their NASCAR brothers. But while they looked cool they didn't add any aerodynamic adavantage. They were only used to help with tire rub.

Only 503 Charger Daytonas were built with either 440 Magnum or 426 Hemi power. All Daytonas wore red, black, or white bumble stripes that bore the name "Daytona" in the middle of the stripe. The wings were painted the same color as the stripes. The "wing cars" would prove to be so fast and dominating that NASCAR effectively outlawed them for the 1971 season, as a new regulation was introduced that restricted all "aero" cars to a maximum engine displacement of 5.0 L (305 in³), down from the previous 7.0 L (429 in³).
Posted by classic automotives at 2:19 AM 0 comments

Email ThisBlogThis!Share to TwitterShare to FacebookShare to Pinterest
Labels: 1969, Dodge 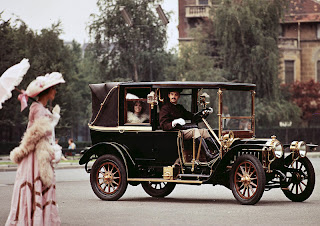