The Citroën DS (also known as Déesse, or Goddess, after the punning initials in French) was an automobile produced by the French manufacturer Citroën between 1955 and 1975. Citroën sold nearly 1.5 million D-series during its 20 years of production.The DS is well-known for its futuristic, aerodynamic body design, and for its innovative technology (including its hydropneumatic self-leveling suspension system).

Model history
After 18 years of development in secret as the successor to the venerable Traction Avant, the DS 19 was introduced on October 5, 1955 at the Paris Motor Show. The car's appearance and innovative engineering captured the imagination of the public and the automobile industry almost overnight. 743 orders were taken in the first 15 minutes of the show, and orders for the first day totalled 12,000.

Far from being just a fascinating technology in search of a purpose, contemporary journalists were effusive in noting how the DS dramatically pushed the envelope in the ride vs. handling compromise possible in a motor vehicle.

The high price tag, however, hurt general sales in a country still recovering from World War II 10 years earlier, and a submodel, the ID (another pun: in French, Idée, or Idea), was introduced in 1957 to appeal to more cost-conscious buyers. The ID shared the same body with the DS, but had more traditional features under the hood. It had no power steering (though this was added as an option later), and instead of the hydraulically controlled manual transmission and clutch, it had a conventional clutch and transmission. Interestingly, the first model series was called 11D, a clear reminder of the last model of the Traction Avant, the 11C. A station wagon variant, the ID Break, was introduced in 1958.

Outside of France, the car's radical and cosmopolitan design appealed to non-conformists. A United States advertisement summarised this selling point: "It takes a special person to drive a special car".

Throughout its model lifetime, the DS managed to remain ahead of its time. It featured power disc brakes, a hydropneumatic suspension including an automatic levelling system and variable ground clearance, power steering and a semi-automatic transmission. A fiberglass roof reduced weight transfer. Inboard front brakes (as well as an independent suspension) reduced unsprung weight. Different front and rear track widths and tire sizes reduced the understeer typical of front-engined and front-wheel drive cars.

Despite the rather leisurely acceleration afforded by its small four-cylinder engine, the DS was successful in motorsports like rallying, where sustained speeds on poor surfaces are paramount.

The DS came in third in the 1999 Car of the Century competition, recognizing the the world's most influential auto designs. Winner and second place went to the Ford Model T and the Mini. It placed fifth on Automobile Magazine "100 Coolest Cars" listing in 2005.

History will remember the DS for many reasons, including the fact it was the first production car with front disc brakes.

Technical innovations
Hydraulic system
The hydraulic system of the DS 19 was a revolution. Previously hydraulics had been restricted to use in brakes and power steering; the DS used them for the suspension, clutch and transmission. The later ID19 had manual steering and a simplified power braking system.

At first it was often described as air/oil suspension, since both elements played a key role.

The hydraulic cylinder was fed with hydraulic fluid from the main pressure reservoir via a height corrector, a valve controlled by the mid-position of the anti-roll bar connected to the axle. If the suspension was too low, the height corrector introduced high-pressure fluid. If it was too high, it released fluid back to the fluid reservoir. In this manner, it maintained a constant height. A control in the cabin allowed the driver to select one of five heights:
* normal riding height.
* two slightly higher riding heights, for poor terrain.
* two extreme positions for changing wheels.

Source and reserve of pressure
The central part of the hydraulic system was the high pressure reservoir, which maintained a pressure of between 130 and 150 bar in two accumulators. These accumulators were very similar in construction to the suspension spheres. One was dedicated to the brakes, and the other ran the other hydraulic systems. Thus in case of a hydraulic failure (a surprisingly infrequent occurrence), the first indication would be that the steering became heavy, followed by the gearbox not working; only later would the brakes fail.

Hydraulic fluid
The original hydropneumatic system used a vegetable oil (LHV or liquide hydraulique végétale) similar to that used in other cars at the time. Very soon, Citroën changed to using a synthetic fluid (LHS or liquide hydraulique synthétique). Both of these had the disadvantage that they are hygroscopic, as is the case with most brake fluids. Disuse allows water to enter the hydraulic components causing deterioration and expensive maintenance work. The difficulty with hygroscopic hydraulic fluid was exacerbated in the DS/ID due to the extreme rise and fall in the fluid level in the reservoir, which went from nearly full to nearly empty when the suspension "got up" and the 6 accumulators in the system filled with fluid. With every "inhalation" of fresh moisture- (and dust-) laden air, the fluid absorbed more water. In August 1967, Citroën introduced a new mineral oil-based fluid LHM, or liquide hydraulique minérale. This fluid was much less aggressive on the system and it remains in use to the present day.

The gear change control consisted of:
* Hydraulic gear selector.
* Clutch control. This was the most complicated part. The speed of engagement of the clutch was controlled by:
* A centrifugal regulator, sensing engine rpm and driven off the camshaft by a belt
* The position of the butterfly valve in the carburettor (i.e. the position of the accelerator)
* The brake circuit: when the brake was pressed, the engine idle speed dropped to a rpm below the clutch engagement speed, thus preventing friction while stopped in gear at traffic lights. When the brake was released, the idle speed increased to the clutch dragging speed. The car would then "creep" much like automatic transmission cars. This drop in idle throttle position also caused the car to have more engine drag when the brakes were applied even before the car slowed to the idle speed in gear, preventing the engine from "pulling" against the brakes.

Impact on Citroën brand development
The 1955 DS in one stroke cemented the Citroën brand name as an automotive innovator. In fact, the DS caused such a huge sensation that Citroën was fearful future models would not be bold enough. Other than variations on the very basic 2 cylinder economy car Citroën 2CV, like the Citroën Ami, no new models were introduced from 1955 to 1970.

The DS was a large, expensive executive car and a downward brand extension was attempted, but without result. Throughout the late 1950s and 1960s Citroën developed many new vehicles for the very large market segments between the 2CV and the DS, occupied by vehicles like the Peugeot 403, Renault 16 and Ford Cortina. None made it to production. Either they had uneconomic build costs, or were ordinary "me too" cars, not up to the company's high standard of innovation. Because Citroën was owned by Michelin as a sort of research laboratory, such experimentation was possible. Citroën finally did introduce the clever Citroën GS in 1970, which sold a spectacular 2.5 million units.

DS in the US
While the DS was a hit in Europe, it seemed rather odd in the United States. Ostensibly a luxurious car, it did not have the basic features that buyers of that era expected to find on such a vehicle - fully automatic transmission, air conditioning, power windows and a reasonably powerful engine. The DS price point was similar to the contemporary Cadillac luxury car. Also, people at the time wanted only the newest models, which changed every year, like fashion, yet the DS appeared vaguely derivative of the 1950 Hudson Hornet step-down design.

Outdated US legislation also banned one of the car's more advanced features, aerodynamic headlamps, now common in US automobiles. Ultimately, 38,000 units were sold. The first year of the aerodynamic glass over the DS' headlights along with driving lights turned by the steering, was also the first year these features were outlawed in the US.

A station wagon version was introduced in 1958. It was known by various names in different markets (Break in France, Safari and Familiale in the UK, Wagon in the US, and Citroën Australia used the terms Safari and Station-Wagon). It had a steel roof to support the standard roof rack.

DS engines
As with all French cars, the DS design was impacted by the tax horsepower system, which effectively mandated very small engines.

Unlike the Traction Avant predecessor, there was no top-of-range model with a powerful six cylinder engine. The DS was designed around an air cooled flat six based on the design of the 2 cylinder engine of the 2CV, similar to the motor in the Porsche 911. Technical issues forced this idea to be scrapped.

Thus, for such a modern car, the engine of the original DS 19 was also old-fashioned. It was derived from the engine of the 11CV Traction Avant (models 11B and 11C). It was an OHV four-cylinder engine with three main bearings and dry liners, and a bore of 78 mm and a stroke of 100 mm, giving a volumetric displacement of 1911 cc. The cylinder head had been reworked; the 11C had a reverse-flow cast iron cylinder head and generated 60 hp at 3800 rpm; by contrast, the DS 19 had an aluminium cross-flow head with hemispherical combustion chambers and generated 75 hp at 4500 rpm. Apart from these details, there was very little difference between the engines: even the locations of the cylinder head studs were the same, so that it was possible to put the cylinder head of a DS on a Traction Avant engine and run it.

Like the Traction Avant, the DS had the gearbox mounted in front of the engine, with the differential in between. Thus the DS is a really a mid engine front wheel drive car. It initially had a four-speed transmission and clutch, operated by a hydraulic controller. To change gears, the driver flicked a lever behind the steering wheel to the next position and eased-up on the accelerator pedal. The hydraulic controller disengaged the clutch, engaged the nominated gear, and re-engaged the clutch. Manual transmission control was a lower-cost option. The later and simpler ID19 also had the same gearbox and clutch, manually operated. In the 1970s a five-speed manual and 3-speed fully-automatic were introduced, in addition to the original four-speed unit.

The DS and ID powerplants evolved throughout its 20 year production life. The car was underpowered and faced constant mechanical changes to boost the performance of the four-cylinder engine. The initial 1911 cc 3 main bearing engine (carried forward from the Traction Avant) of the DS 19 was replaced in 1965 with the 1985 cc 5 bearing motor of the DS 19a (called DS20 from September 1969).

Lastly, 1973 saw the introduction of the 2347 cc engine of the DS 23 in both carbureted and fuel injected forms. The DS 23 with electronic fuel injection was the most powerful production model, producing 141 horsepower.

IDs and their variants went through a similar evolution, generally lagging the DS by about one year. ID models never received the DS 23 engine or fuel injection. The DS was offered with a number of transmission options, including the "Hydraulique" 4-speed semi-automatic, 4-speed and 5-speed manuals and a 3-speed Borg-Warner full-automatic. The full-automatic transmissions were intended for the US market, but as Citroën withdrew from the US in 1972, the year of highest US sales, due to constrictive road rules, most automatic DSs, being the DS 23 EFI sedans with air conditioning, were sold in Australia.
Posted by classic automotives at 2:43 AM 0 comments

Email ThisBlogThis!Share to TwitterShare to FacebookShare to Pinterest
Labels: 1956, Citroen 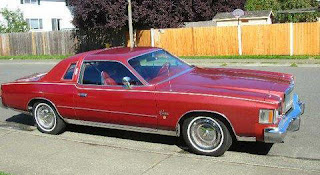 Chrysler Cordoba, 1978
Posted by classic automotives at 2:36 AM 0 comments