Oldsmobile Profile Concept, 2000
Posted by classic automotives at 2:09 AM 0 comments

The Intrigue was designed to compete more with Japanese automobiles, and replaced the Cutlass Supreme. It went into production on May 5, 1997. It was similar to a range of mid-sized sedans from other GM divisions, including the Buick Century, Buick Regal, Chevrolet Impala, Chevrolet Monte Carlo and the Pontiac Grand Prix. The Intrigue diverged from its siblings in its chassis tuning, equipment, and some dimensions. Wheelbase, for instance, was 1.5 inches shorter for the Intrigue than the Grand Prix.

All Intrigues were built at the GM Fairfax plant in Kansas City, Kansas, where the Grand Prix was also built (the Buick Century and Regal, and the Chevrolet Impala and Monte Carlo were all built in Oshawa, Ontario, Canada). For the 1999 model year, a new, sophisticated DOHC 3.5L "Shortstar" engine, a six-cylinder based on the GM Northstar V8, was introduced. On June 14, 2002, the final Intrigue rolled off the assembly line, as part of the Final 500 Collectors Edition.

Posted by classic automotives at 2:06 AM 0 comments 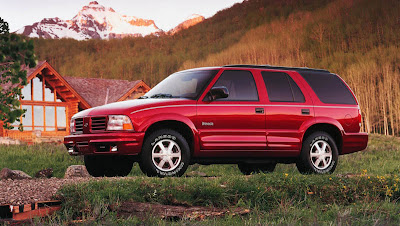 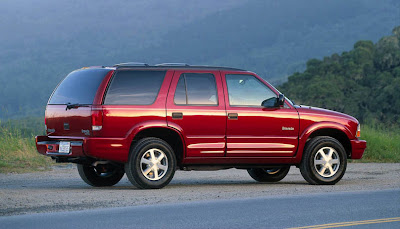 The Bravada was a luxury SUV from the Oldsmobile marque of General Motors. There have been two different vehicles to bear this model name, the first and second-generation GMT330, and the 2002 to 2004 GMT360.

1991
The 1991 Bravada was an upscale version of the then-new 4-door S-Blazer/Jimmy. It was the first truck-based vehicle offered by Oldsmobile since the 1920s, and by that time was a United States-only vehicle. Unlike its siblings, the Bravada was only offered with "Smart Trak" all-wheel drive, leather upholstery, and the 4.3 L Z-code engine. Anti-lock brakes and remote keyless entry were also standard. This version was produced through 1994.

1996
The Bravada was refreshed later than the others, with no 1995 models produced. The 1996 and 1997 models were less boxy than their predecessor. Daytime running lamps were standard fare including a driver's airbag. The interior styling was more appealing to the eye with less ridges and squares, much like the exterior. Another refreshening occurred in 1998, with a revised interior including dual airbags and a new front fascia which included the new Aurora inspired Oldsmobile logo. OnStar was available in 1999 as a cell phone unit, later becoming integrated into the rearview mirror in 2001 with available features like hands-free calling and virtual advisor. A Bose sound system was added for 1999 and the engine was redesigned in 2000, though output remained the same. A new two-tone exterior dubbed the Platinum Edition was made available in 2000. This generation was phased out in 2001 to make way for the new GMT360 Bravada.
Posted by classic automotives at 2:04 AM 0 comments