The Citroën DS (also known as Déesse, or Goddess, after the punning initials in French) was an automobile produced by the French manufacturer Citroën between 1955 and 1975. Citroën sold nearly 1.5 million D-series during its 20 years of production.The DS is well-known for its futuristic, aerodynamic body design, and for its innovative technology (including its hydropneumatic self-leveling suspension system).

The DS advanced the achievable standards in terms of ride quality, roadholding, handling, and braking in an automobile. Automotive journalists of the time often noted that competitors took decades to adapt to the higher standards it set. The smooth, aerodynamic body lines gave the car a futuristic appearance. While it looked very unusual in 1955, public tastes appear to have caught up with the DS in the post-Ford Taurus/Audi 100 era.

Model history
After 18 years of development in secret as the successor to the venerable Traction Avant, the DS 19 was introduced on October 5, 1955 at the Paris Motor Show. The car's appearance and innovative engineering captured the imagination of the public and the automobile industry almost overnight. 743 orders were taken in the first 15 minutes of the show, and orders for the first day totalled 12,000.

The high price tag, however, hurt general sales in a country still recovering from World War II 10 years earlier, and a submodel, the ID (another pun: in French, Idée, or Idea), was introduced in 1957 to appeal to more cost-conscious buyers. The ID shared the same body with the DS, but had more traditional features under the hood. It had no power steering (though this was added as an option later), and instead of the hydraulically controlled manual transmission and clutch, it had a conventional clutch and transmission. Interestingly, the first model series was called 11D, a clear reminder of the last model of the Traction Avant, the 11C. A station wagon variant, the ID Break, was introduced in 1958.

Outside of France, the car's radical and cosmopolitan design appealed to non-conformists. A United States advertisement summarised this selling point: "It takes a special person to drive a special car".

Throughout its model lifetime, the DS managed to remain ahead of its time. It featured power disc brakes, a hydropneumatic suspension including an automatic levelling system and variable ground clearance, power steering and a semi-automatic transmission. A fiberglass roof reduced weight transfer. Inboard front brakes (as well as an independent suspension) reduced unsprung weight. Different front and rear track widths and tire sizes reduced the understeer typical of front-engined and front-wheel drive cars.
Technical innovations
Hydraulic system
The hydraulic system of the DS 19 was a revolution. Previously hydraulics had been restricted to use in brakes and power steering; the DS used them for the suspension, clutch and transmission. The later ID19 had manual steering and a simplified power braking system.

The hydraulic cylinder was fed with hydraulic fluid from the main pressure reservoir via a height corrector, a valve controlled by the mid-position of the anti-roll bar connected to the axle. If the suspension was too low, the height corrector introduced high-pressure fluid. If it was too high, it released fluid back to the fluid reservoir. In this manner, it maintained a constant height. A control in the cabin allowed the driver to select one of five heights:
* normal riding height.
* two slightly higher riding heights, for poor terrain.
* two extreme positions for changing wheels.

Source and reserve of pressure
The central part of the hydraulic system was the high pressure reservoir, which maintained a pressure of between 130 and 150 bar in two accumulators. These accumulators were very similar in construction to the suspension spheres. One was dedicated to the brakes, and the other ran the other hydraulic systems. Thus in case of a hydraulic failure (a surprisingly infrequent occurrence), the first indication would be that the steering became heavy, followed by the gearbox not working; only later would the brakes fail.

Hydraulic fluid
The original hydropneumatic system used a vegetable oil (LHV or liquide hydraulique végétale) similar to that used in other cars at the time. Very soon, Citroën changed to using a synthetic fluid (LHS or liquide hydraulique synthétique). Both of these had the disadvantage that they are hygroscopic, as is the case with most brake fluids. Disuse allows water to enter the hydraulic components causing deterioration and expensive maintenance work. The difficulty with hygroscopic hydraulic fluid was exacerbated in the DS/ID due to the extreme rise and fall in the fluid level in the reservoir, which went from nearly full to nearly empty when the suspension "got up" and the 6 accumulators in the system filled with fluid. With every "inhalation" of fresh moisture- (and dust-) laden air, the fluid absorbed more water. In August 1967, Citroën introduced a new mineral oil-based fluid LHM, or liquide hydraulique minérale. This fluid was much less aggressive on the system and it remains in use to the present day.

Read more »
Posted by classic automotives at 3:36 AM 0 comments

Email ThisBlogThis!Share to TwitterShare to FacebookShare to Pinterest
Labels: 1960, Citroen

The Coupé was discontinued, but a five-door hatchback model, the 100 Avant, was launched as part of this generation. Two- and four-door models continued.

The 100 was sold as the Audi 5000 in the United States, in order to rebrand the car and avoid association with the C1. It was a sales success, allowing Audi to spread development costs over a much wider base than Europe-only competitors.

In 1980, the Audi 200, a plusher variant that included a turbocharged model of 170 bhp, available in 200 5E or 200 5T spec for the UK. The 5T or turbocharged model in addition of the 5E model featured heated seats, opening front quarter windows, cruise control, ski bag, green heat insulated glass, electric sunroof and elec heated mirrors. Available standard in 3 speed auto. The only options listed in the brochure were 5 speed manual transmission at no extra cost, air con and leather seating. This car was marketed in the US as the 5000 Turbo. The Audi 100/200 was succeeded by the C3 platform model in 1983, and the 200 followed one year later.

Posted by classic automotives at 3:30 AM 1 comments

Email ThisBlogThis!Share to TwitterShare to FacebookShare to Pinterest
Labels: 1979, Audi 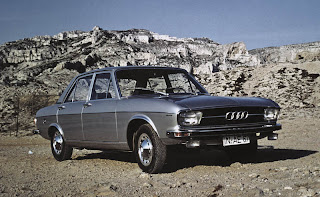 The Audi 100 was shown to the press on November 26, 1968. Originally denoting a power output of 100 PS, the Audi 100 was the range's largest car after the Audi brand was revived by Volkswagen in the 1960s. The C1 platform spawned several variants: the Audi 100 two- and four-door sedans, and the Audi 100 Coupé S, a stylish fastback coupé.

Posted by classic automotives at 3:27 AM 0 comments