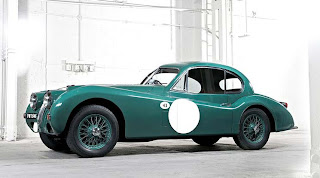 The Jaguar XK140 is a sports car manufactured by Jaguar between 1954 and 1957, the successor to Jaguar's highly successful XK120. Upgrades included better brakes, rack and pinion steering, increased suspension travel and modern tube type shock absorbers instead of the older lever arm design.

The Jaguar XK140 was introduced in late 1954 and sold as a 1955 model. The primary visual change was the more substantial front and rear bumpers, with large overriders. Another new feature was modern flashing turn signals, operated by a separate switch on the dash. The twin amber lights positioned above the front bumper helped to distinguish the XK140 - until XK120 owners started installing the same equipment.

Front grille size stayed the same but became a one piece cast unit with fewer, thicker vertical slats. The Jaguar badge was fitted to the grille itself, rather than being mounted between the grille and hood/bonnet as on the XK120. A chrome trim strip extended back over the bonnet and at the rear continued down the centre of the boot (trunk) lid, where it contained a red shield with the words 'Winner Le Mans 1951-3' inscribed in gold.

The interior was improved for taller drivers with an addition of 3 inches (76 mm) of legroom, as a result of relocating the engine, firewall and dash forward. The new arrangement left no room for the XK120 battery compartment, and the single battery was now located low down inside the wing on the inlet side, making it almost impossible to replace.

The Jaguar XK140 continued to feature the famous Jaguar XK engine with the Special Equipment modifications from the XK120 as standard, increasing the specified power by 10 bhp to 190 bhp (142 kW) gross at 5500 rpm. The special C-Type cylinder head was also carried through from the XK120 catalogue as an option, specified at 210 bhp (157 kW) gross at 5750 rpm.

A car fitted with the C-type cylinder head, 2-inch sandcast H8 carburettors, heavier front torsion bars and twin exhaust pipes was known in the UK as an XK140 SE. In North America it was popularly called an XK-140 MC.

In 1956, the XK140 was the first Jaguar sports car to be offered with an automatic transmission. As with the XK120, the availability of wire wheels and dual exhausts were options although most cars imported into the United States had wire wheels. Cars with disc wheels continued to be offered with fender skirts (spats) closing the rear wheel arch.

The Jaguar XK140 was available in three body styles. The OTS (Open Two Seater) roadster had a light canvas top assembly that when lowered fitted behind the seats and thus completely disappeared inside the body. The interior of the OTS was trimmed in leather and leatherette, including the dash. Like the XK120 Roadster, the Jaguar XK140 OTS had removable canvas and plastic side curtains on light alloy doors, and either a long or short tonneau cover to keep the cockpit dry with the top down.

As well as real wind-up windows, the DHC (Drop Head Coupe) had a permanently-mounted padded soft top that when lowered sat above and outside the body of the car. it also had a fixed windscreen (unlike the removable windscreen of the OTS). The DHC had a very elegant walnut-veneered dash and door cappings, as did the FHC (Fixed Head Coupe). As a gesture to practicality, a jump seat was added to both coupe models. The FHC's windscreen was mounted further forward, giving it considerably more interior space than the DHC.
Posted by classic automotives at 4:18 PM 0 comments

Email ThisBlogThis!Share to TwitterShare to FacebookShare to Pinterest
Labels: 1955, Jaguar

The Jaguar D-Type, like its predecessor the C-Type, was a factory-built race car. Although it shared the basic straight-6 XK engine design (initially 3.4L and eventually uprated to 3.8 litres in the late fifties) with the C-Type, the majority of the car was radically different. Perhaps its most ground-breaking innovation was the introduction of a monocoque chassis, which not only introduced aircraft-style engineering to competition car design, but also an aeronautical understanding of aerodynamic efficiency. The Jaguar D-Type was introduced purely for competition, but after Jaguar withdrew from racing, the company offered the remaining, unfinished chassis as the roadgoing Jaguar XK SS, by making changes to the racers: adding an extra seat, another door, a full-width windshield and primitive folding top, as concessions to practicality. However, on the evening of 12 February 1957, a fire broke out at the Browns Lane plant destroying nine of the twenty five cars that had already been completed or in semi-completion. Production is thought to have included 53 customer D-Types, 18 factory team cars, and 16 XKSS versions.

Design
The new chassis followed aircraft engineering practice, being manufactured according to monocoque principles. The central tub, within which the driver sat, was formed from sheets of aluminium alloy. To this was attached an aluminium tubing subframe carrying the bonnet, engine, front suspension, and steering assembly. The rear suspension and final drive were mounted directly onto the monocoque itself. Fuel was carried in deformable bags inside cells within the monocoque; another aircraft innovation.

The highly efficient, aerodynamic bodywork was largely the work of Malcolm Sayer, who joined Jaguar following a stint with the Bristol Aeroplane Company during World War II. Although he also worked on the C-Type, the limitations of the conventional separate-chassis did not allow full expression of his talent. For the Jaguar D-Type, Sayer insisted on a minimal frontal area. To reduce its height, Haynes and former-Bentley engineer Walter Hassan developed dry sump lubrication for the XK engine. By also canting the engine over by 8° (resulting in the trademark, off-centre bonnet bulge) the reduction in area was achieved. Care was taken to reduce drag due to the underbody, resulting in an unusually high top speed; for the long Mulsanne Straight at Le Mans, a large vertical stabiliser was mounted behind the driver's head for aerodynamic stability with minimum drag. For the 1955 season, factory cars were fitted with a revised, long-nose version of the bodywork, which increased top speed even further.

Mechanically, many features were shared with the outgoing C-Type. The ground-breaking disc brakes were retained, as was the XK engine. Apart from the new lubrication system, as development progressed during the Jaguar D-Type's competition life the engine was also revised. 1955 saw the introduction of larger valves, and an asymmetrical cylinder head design within which to accommodate them. The Jaguar D-Type was the second racing car to have Dunlop disk brakes. The Citroën DS, introduced a year later, was the first production car with disk brakes in Europe. The Crosley Hotshot was the first American automobile with disk brakes, in 1949.

Competition history
The Jaguar D-Type was produced by a team, led by Jaguar's race manager Lofty England, who always had at least one eye on the 24 Hours of Le Mans, the most prestigious endurance race of the time. As soon as it was introduced to the racing world in 1954, the D-Type was making its presence felt. For the 1954 24 Hours of Le Mans the new car was expected to perform well, and perhaps even win. However, the cars were hampered by sand in their fuel. After the fault had been diagnosed and the sand removed, the car driven by Duncan Hamilton and Tony Rolt quickly got back on the pace, finishing less than one lap down on the winning Ferrari.

The 1955 car incorporated the new long-nose bodywork, and the engine had been uprated with larger valves. The team again proved strong at Le Mans, and with no sand to worry about they were a good match for the Mercedes-Benz 300 SLR cars who were hotly tipped to win. Sadly the contest was curtailed by one of the worst accidents ever to occur in motorsport: after only three hours of the twenty-four had elapsed, Pierre Levegh's SLR clipped the tail of an Austin-Healey, sending the German machine into the hay-bale barrier. The Mercedes erupted into a flaming ball and sent burning wreckage and debris into the crowd. More than 80 people, including Levegh, were killed, and many more injured. Mercedes withdrew from the race almost immediately, although at the time Juan Manuel Fangio was leading in his SLR, but Jaguar opted to continue. Some blamed Mike Hawthorn for causing the crash as he swerved his Jaguar D-Type in front of the Healey, setting off the tragic chain of events. Hawthorn and his co-driver Ivor Bueb went on to win the race.

With Mercedes deciding to withdraw from motorsport at the end of the 1955 season, the field was clear for Jaguar to clean up at the 1956 24 Hours of Le Mans race. However, it proved to be a bad year for the works team; only one of their three cars made it to the finish, and then only in 6th place. Luckily for the Jaguar D-Type's reputation, the small Edinburgh-based team Ecurie Ecosse were also running a D-Type, driven by Ron Flockhart and Ninian Sanderson, and this car came through to win ahead of works teams from both Aston Martin and Scuderia Ferrari. Away from Le Mans, the Cunningham Team raced several Jaguar D-Types after being offered the automobiles by Jaguar's head, Sir William Lyons, if Briggs Cunningham would stop building his own automobiles. In May 1956, the Cunningham team's entries in the Cumberland circuit in Maryland included three of those D-Type Jaguars - characteristically painted in the pristine white-and-blue Cunningham Team colors - for drivers John Fitch, John Gordon Benett, and Sherwood Johnston.

Ironically, after Jaguar had withdrawn from motorsport at the end of the 1956 season, 1957 proved to be the Jaguar D-Type's most successful year. In the 1957 Le Mans race D-Types took five of the top six placings; Ecurie Ecosse (with a large degree of support from Jaguar, and a 3.8L engine) again took the win, and second place. This was the high-water mark in the car's career however.

For 1958, the Le Mans rules were changed, limiting engine size to 3 liters for sports racing cars, thus ending the domination of Jaguar's D-Type with 3.8 liter XK engine. Jaguar developed a 3-liter version of the XK engine, which powered D-Types in the 1958, 1959 and 1960 Le Mans races. However, the 3-liter version of the XK engine was never reliable and by 1960 was not producing enough horsepower to be competitive.
Posted by classic automotives at 4:15 PM 0 comments

Email ThisBlogThis!Share to TwitterShare to FacebookShare to Pinterest
Labels: 1954, Jaguar

The SS 100 is a British 2 seat sports car built between 1936 and 1940 by SS Cars Ltd of Coventry, England. The last one is thought to have been delivered in 1941. In 1936 the name Jaguar was given to a new saloon car and from then on to all the cars. Following World War II, due to the connotations then attached to the initials SS, the company was renamed Jaguar.

The chassis with a wheelbase of 8 feet 8 inches (2.64 m) was essentially a shortened version of the one designed for the 2.5 litre saloon, a car produced in much greater numbers, and had first been seen in the SS 90 of 1935. Suspension was on half elliptical springs all round with rigid axles. The engine was a development of the old 2.5 litre Standard unit converted from side valve to overhead valve with a new cylinder head designed by William Heynes and Harry Weslake. The power output was increased from 70 bhp (52 kW) to 100 bhp (70 kW). Twin SU carburettors were bolted directly to the cylinder head. In 1938 the engine was further enlarged to 3.5 litres and the power increased to 125 bhp (93 kW). The four speed gearbox had synchromesh on the top 3 ratios. Brakes were by Girling. The complete car weighed just over 23 cwt (2600 pounds, 1150 kg).

Widely considered to be one of the most aesthetically pleasing Jaguar cars it is one of the rarest with only 198 of the 2.5 litre and 116 of the 3.5 litre models being made. Most stayed on the home market but 49 were exported.
Posted by classic automotives at 4:07 PM 0 comments