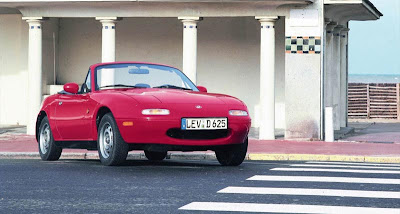 The Mazda MX-5 is a popular sports car built by Mazda in Hiroshima, Japan, since 1989. It is known as MX-5 Miata (or popularly just Miata) in North America, MX-5 in Oceania and Europe, and Roadster (under the Eunos marque until 1996) in Japan. The MX-5 is one of the world's best-selling sports cars, with 748,904 cars sold until the end of 2005. Beginning with the third-generation 2006 model, Mazda consolidated worldwide (excluding Japan) marketing using the MX-5 name, though enthusiasts in the USA (and the company itself) still refer to it as Miata, a name that means "reward" in Old High German.

The return of the sports roadster
The MX-5 was envisioned by its designers as a small roadster with a minimum of unnecessary weight and complexity, a direct descendant of the small British roadsters of the 1960s such as the Triumph Spitfire, MG Midget, Lotus Elan, and Porsche 550 Spider. By the early 1980s, roadsters had all but vanished from the market, sacrificed to the increasing safety and anti-pollution regulations everywhere. The MX-5 would thus mark the return of the roadster, using modern technology allied to the tradition of the roadster type.

As a result, the MX-5 has a traditional FR (front-engine, rear-wheel-drive) layout and 4-wheel independent double wishbone suspension. It comes with a longitudinally mounted four cylinder engine coupled to a manual transmission (an automatic transmission is available as an option).

The body is a conventional, but very light, unibody shell. The MX-5 also incorporates a unique trusswork called the Powerplant Frame (PPF) which connects the engine to the differential, minimizing flex and creating a tight, responsive feel. Many MX-5s feature limited slip differentials and antilock brakes. Traction control is an option available on some models.

With an approximate 50:50 front/rear weight balance, the car has very neutral handling, which makes it easy to drive for the beginner, and fun for the advanced driver. Inducing oversteer is easy and very controllable. The MX-5 is thus popular in amateur and stock racing events, including, in the USA, the Sports Car Club of America's Solo2 autocross and Spec Miata race series.

As a measure for success, the Guinness Book of Records declared the MX-5 Miata the world's best-selling sports car on February 13, 2002, with more than 700,000 sold until that date.

There have been three generations of the MX-5, each introducing overall changes to the exterior, interior and mechanical components of the car: the first generation, with production code NA, was produced from 1990 to 1997 in model years; the second generation, NB, from 1999 to 2005; and the current third generation, NC, from 2006.

The first round of judging the competing designs for the MX-5 was held in April 1984. Designs were presented on paper. The mid-engined car appeared the most impressive, although it was known at the time that such a layout would struggle to meet the noise, vibration and harshness (NVH) requirements of the project. It was only at the second round of the competition in August 1984, when full-scale clay models were presented, that the California FR design, codenamed "Duo 101", won the competition and was selected as the basis for Mazda's new light-weight sports car.

The Duo 101 design, so named as either a soft-top or hard-top could be used, incorporated many key stylistic cues inspired by the Lotus Elan, a 1960s roadster widely considered as one of the best-handling sports cars of its day. International Automotive Design (IAD) in Worthing, England was commissioned to develop a running prototype. It was built with a fiberglass body, a 1.4-liter engine from a Mazda Familia and components from a variety of early Mazda models. The prototype was completed in August 1985.

After some minor changes in the design, the project received final approval on January 18, 1986 and the car was now codenamed P729. The task of constructing five engineering mules (more developed prototypes) was again allocated to IAD, which also conducted the first front and rear crash tests on the P729. The project was moved to Japan for final engineering details and production issues to be decided. The MX-5 was almost ready to be introduced to the world as a a true light-weight sports car, weighing just 940 kg (2070 lb).

Read more »
Posted by classic automotives at 6:01 AM 0 comments