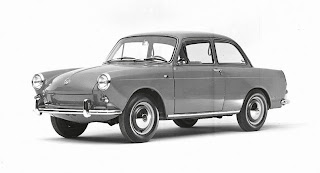 Volkswagen Type 3, was originally launched in two varieties, the Notchback a saloon bodied version and the Squareback an estate bodied version in 1961. The Fastback a coupe styled version arrived as the 1966 addition to the range. This automobile was introduced in 1961 by Volkswagen to diversify its product range beyond the Type 1 (Beetle) and the Type 2 (Bus). The Type 3, officially the Volkswagen 1500, was designed to allow Volkswagen to make a more sophisticated car while maintaining much of the engineering from the Type 1.

The Type 3 was initially equipped with a 1.5 L (1493 cc) engine based on the aircooled flat-4 found in the Type 1. While the long block remained the same as the Type 1, the engine cooling was drastically changed to allow for a much lower engine profile. This resulted in increased area for cargo stowage and the so-called 'Pancake' or 'Suitcase' engine. This engine's displacement would later increase to 1600cc.

The type 3 had four models:

Posted by classic automotives at 3:50 AM 0 comments

The Volkswagen Type 1, more commonly known as the Beetle, Fusca, Coccinelle, Vocho, Bug, Volky or Käfer (German), is a compact car, produced by Volkswagen from 1938 until 2003. Although the names "Beetle" and "Bug" were quickly adopted by the public, it was not until August of 1967 that VW began using the name in marketing materials. It had previously been known only as either the "Type I" or as the 1200 (twelve-hundred), 1300 (thirteen-hundred) or 1500 (fifteen-hundred), which had been the names under which the vehicle was marketed in Europe prior to 1967; the numbers denoted the vehicle's engine size in cubic centimetres. In 1998, many years after the original model had been dropped from the lineup in most of the world (it continued in Mexico and a handful of other countries until 2003) VW introduced a "New Beetle" (built on a Volkswagen Golf platform), bearing a strong resemblance to the original.

In the international poll for the award of the world's most influential car of the twentieth century the Beetle came fourth after the Ford Model T, the Mini and the Citroën DS.

"The People's Car"
The origins of the car date back to 1925, when Béla Barényi submitted his concepts to the Maschinenbauanstant Wien. Further influences came from the 1931 Tatra T97, and the 1931 Porsche Typ 12.

In 1933 Adolf Hitler met with Ferdinand Porsche to discuss the development of a "Volks-Wagen" ("People Car"), a basic vehicle that should be capable of transporting two adults and three children at a speed of 100 km/h (62 mph), and which should cost no more than a 990 reichsmark (at an average income of 32RM/week).

Advertisement from ca. 1936 says "Five mark a week you must put aside - If in your own car you want to ride!"

Ferdinand Porsche formulated the original parameters of the Beetle several years before it was commissioned. However its production only became financially viable when it was backed by the Third Reich.

The Type 1's mechanics and chassis were shared with several German military vehicles of the period, including the Kübelwagen ("bucket car", later adapted for civil use as the Type 181 or "Thing"), used by both the German military and the SS, and the amphibious Schwimmwagen, built in small numbers
Ferdinand's career continued on to designing an iconic supercar of the 21st century - Porsche.

The military Beetle
Prototypes of the Kdf-Wagen appeared from 1935 onwards — the first prototypes were produced by Daimler-Benz in Stuttgart, Germany. The car already had its distinctive round shape and its air-cooled, flat-four, rear-mounted engine. However, the factory had only produced a handful of cars by the time war started in 1939. Consequently, the first volume-produced versions of the car's chassis were military vehicles, the Jeep-like Kübelwagen Typ 82 (approx. 52,000 built) and the amphibious Schwimmwagen Typ 166 (approx. 14,000 built).

The car was designed to be as simple as possible mechanically, so that there was less to go wrong; the aircooled 985 cc 25 hp (19 kW) motors proved especially effective in actions of the German Afrika Korps in North Africa's desert heat. This was due to the built-in fan-cooling and the superior performance of the flat-four engine configuration. The innovative suspension design used compact torsion beams instead of coil or leaf springs.

A handful of civilian-specific Beetles were produced, primarily for the Nazi elite, in the years 1940–1945, but production figures were small. In response to gasoline shortages, a few wartime "Holzbrenner" Beetles were fueled by wood pyrolysis gas producers under the hood.
In addition to the Kübelwagen, Schwimmwagen, and a handful of others, the factory managed another wartime vehicle:
the Kommandeurwagen; a Beetle body mounted on the 4WD Kübelwagen chassis. A total of 669 Kommandeurwagens were produced until 1945, when all production was halted due to heavy damage sustained in Allied air raids on the factory. Much of the essential equipment had already been moved to underground bunkers for protection, allowing production to resume quickly once hostilities had ended.

Read more »
Posted by classic automotives at 3:45 AM 0 comments