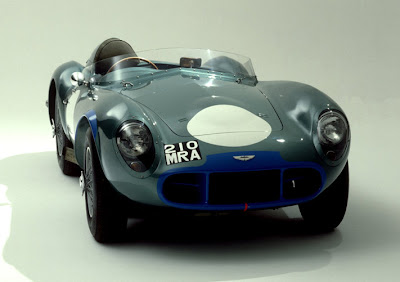 Aston Martin DB3S
The Aston Martin DB3S was a lighter version of the car, introduced in 1953. It was somewhat more successful, and was produced until 1956. Two coupe versions were also built.

The Aston Martin DB3S was replaced in 1956 by the famed Aston Martin DBR1, which finally claimed Le Mans in 1959
Posted by classic automotives at 6:27 AM 0 comments

Aston Martin DB3S
The Aston Martin DB3S was a lighter version of the car, introduced in 1953. It was somewhat more successful, and was produced until 1956. Two coupe versions were also built.

The Aston Martin DB3S was replaced in 1956 by the famed Aston Martin DBR1, which finally claimed Le Mans in 1959
Posted by classic automotives at 6:27 AM 0 comments 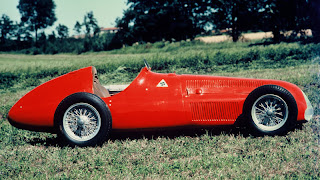 The Alfa Romeo 158/159, also known as the Alfetta (Little Alfa in Italian), is one of the most successful racing cars ever produced. The Alfa Romeo 158 and its derivative, the 159, took 47 wins from 54 Grands Prix entered. It was originally developed for the pre-World War II voiturette formula (1937) and has a 1.5 litre straight-8 supercharged engine. Following World War II, the car was eligible for the new Formula One introduced in 1947. In the hands of drivers such as Nino Farina, Juan-Manuel Fangio and Luigi Fagioli, it dominated the first two seasons of the Formula One World Championship.

The first version of this successful racing car, the Alfa Romeo 158, was made during 1937/1938. The main responsibility for engineering was given to Gioacchino Colombo.

The car's name refers to its 1.5 litre engine and eight cylinders. The voiturette class was for racing cars with 1.5 litre engines, standing in the same relation to the top 'Grand Prix' formula (usually for 3 litre engines) as the GP2 series does to Formula One today. Alfa's 3 litre racing cars in 1938 and 1939 were the Tipo 308, 312 and 316.

The Alfa Romeo 158 debuted with the works Alfa Corse team at the Coppa Ciano Junior in August 1938 at Livorno, Italy, where Emilio Villoresi took the car's first victory. At that time the 1479 cc engine produced around 200 bhp (150 kW) at 7000 rpm. with the help of a single-stage Roots blower. More success came at the Coppa Acerbo, Coppa Ciano and Tripoli Grand Prix in May 1940. Soon World War II stopped development of the car for six years. After the war the engine was developed further to push out 254 bhp (189 kW) in 1946.

In 1947, the Alfetta became eligible for the newly-created Formula One. The new rules allowed 1500 cc supercharged and 4500 cc naturally aspirated engines. The Alfa Romeo 158 was modified again, this time to produce over 300 bhp (220 kW) and was denoted as Alfa Romeo Tipo 158/47. The car made a tragic debut in the 1948 Swiss Grand Prix where Achille Varzi lost control of his car and was killed. Another loss for the team came in practice for the 1949 Buenos Aires Grand Prix, where Jean-Pierre Wimille was killed in an accident (driving with Simca-Gordini).

The car won every race in which it competed during 1950; it was incredible that a car which had originated in 1938 was so victorious. The Alfa Romeo team included talented drivers such as Giuseppe Farina and Juan Manuel Fangio, the latter of whom later won the World Drivers' Championship five times.

At the end of the 1950 season, a further updated version known as the Alfa Romeo 159 was produced.
Posted by classic automotives at 6:26 AM 0 comments 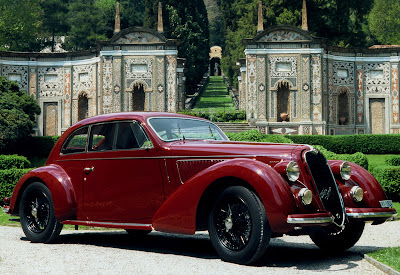 The Alfa Romeo 6C name was used on road, race and sports cars made between 1925-1954 by Alfa Romeo. 6C refers to a straight 6 engine. Bodies to these cars were made by coachbuilders such as James Young, Zagato, Touring, Castagna, and Pininfarina. Starting from 1933 there was also a 6C version with a factory Alfa body, built in Portello.

The Alfa Romeo 6C 2300 (2309 cc) was designed by Vittorio Jano as a cheaper alternative to the Alfa Romeo 8C.
Posted by classic automotives at 6:24 AM 0 comments