By the close of 1980, Lotus were effectively building three different models of Esprit, with distinct chassis designs and body moulds - the Domestic (i.e. UK) S2.2, the Export S2.2, and the dry-sump Turbo Esprit. Introduced in April 1981, the Turbo Esprit and S3 (Series 3) Esprits marked a necessary consolidation: both new models had a common chassis, inheriting much of the configuration of the Essex cars, whilst body production was based on a single common set of moulds.

The S3 continued to use the 2.2 L type 910 engine of the S2.2, whilst the Turbo Esprit reverted to a less complex wet-sump lubrication system, retaining the power and torque outputs of its dry-sump predecessor. The interior for both cars was revised and featured new trim; combined with changes to the body moulds this resulted in more headroom and an enlarged footwell. Externally, the Turbo Esprit retained the full aerodynamic body kit of the Essex cars, and featured prominent 'turbo esprit' decals on the nose and sides; the S3 gained the more substantial bumpers, yet retained the simpler sill line and glazed rear hatch of the S2.2 body style. Both models were supplied with 15" BBS alloy wheels.

In April 1986, the final incarnations of the Giugiaro-styled Esprit were announced, with raised engine compression giving rise to their 'HC' moniker. This increased the output of the naturally aspirated engine to 172 horsepower (128 kW) and 160 lb·ft (220 N·m) for the Esprit HC, and to 215 horsepower (160 kW) and 220 lb·ft (300 N·m) for the Turbo Esprit HC, with the increased torque available at a lower rpm. For markets with stringent emissions requirements, Lotus introduced the HCi variant, teaming the higher compression engine with Bosch KE-Jetronic fuel injection - the first fuel-injected Esprits.
Posted by classic automotives at 2:41 AM 0 comments

Email ThisBlogThis!Share to TwitterShare to FacebookShare to Pinterest
Labels: 1980, Lotus 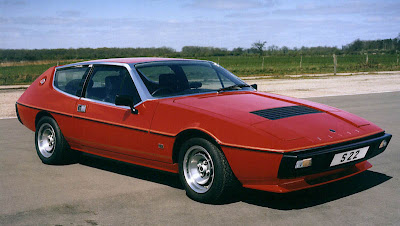 Lotus' first saloon car was front engined with rear wheel drive. Like all production Lotuses since the Elan, the Elite II used fiberglass for the hatchback bodyshell, mounted on a steel backbone chassis evolved from the Elan and Europa. It had 4-wheel independent suspension using coil springs. Power steering and air conditioning were optional from 1974. The Elite II was the basis for the Eclat, and the later Excel four-seaters.

The Elite II was Lotus' first car to use the "907" aluminium-block 4-valve, DOHC, four cylinder, 2.0 L engine. (The 907 engine had previously been used in Jensen-Healeys.) The 907 engine ultimately became the foundation for the Lotus Esprit powerplants, both naturally-aspirated and turbocharged. Elite IIs were available with a 5-speed gearbox standard; from January 1976 an automatic transmission was optional.
The Elite and Elite II (and the related Eclat) are notable in that the stock curb weight is not much over 2000 lb (907 kg). Once the motors reach their power band, both acceleration and handling are impressive.
Posted by classic automotives at 2:40 AM 0 comments

Email ThisBlogThis!Share to TwitterShare to FacebookShare to Pinterest
Labels: 1973, Lotus

The Lotus Esprit was a sports car built by Lotus in the United Kingdom from 1976 to 2004. The silver Italdesign concept that eventually became the Esprit was unveiled at the Turin Motor Show in 1972, and was a development of a stretched Lotus Europa chassis. It was among the first of designer Giorgetto Giugiaro's polygonal "folded paper" designs. Originally, the name Kiwi was proposed, but in keeping with the 'E...' naming format of Lotus tradition, the name became Esprit.
Posted by classic automotives at 2:38 AM 0 comments

Email ThisBlogThis!Share to TwitterShare to FacebookShare to Pinterest
Labels: 1972, Lotus

The Lexus SC series is a personal luxury coupé manufactured by the Toyota Motor Corporation under the Lexus brand and sold in Japan as the Toyota Soarer. The first generation, available as the SC 300 or SC 400 was in production from 1991 until July 7, 2000. A second-generation model, the SC 430, went into production in 2001.

Lexus showcased its new sports convertible, the SC 430, at the Paris Motorshow in 2000, and the car entered production the following year. Power was provided by a 4.3 L 3UZ-FE V8 engine mated to a five-speed automatic transmission. This produces 0-60 runs around 6 seconds using the same engine found in the Lexus LS.

Lexus designers from Europe and Japan worked together to create the convertible's sleek, streamlined design. The car features a retractable aluminium hardtop, all-leather interior, and 18 in alloy wheels. It can seat four and has a base price of US$63,825.

Competitors include the Mercedes-Benz SL-Class, Cadillac XLR, and Jaguar XK, and BMW 6-series.
Posted by classic automotives at 2:37 AM 0 comments