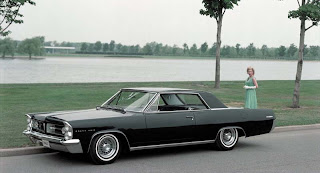 The Grand Prix appeared in the Pontiac line in 1962. It was essentially a standard Pontiac Catalina coupe with minimal outside chrome trim and sportier trim (bucket seats and a center console) inside. The performance-minded John De Lorean, head of Advanced Engineering at Pontiac, contributed greatly to the development of both the Grand Prix and the GTO. Early models had full access to the Pontiac performance option list, including the factory-race Super Duty 421 powertrain installed in a handful of 1962 and 1963 cars.

The full-size Catalina-based Grand Prix did very well through the 1960s, and is often credited with the move towards minimal exterior trim seen in the 1960s. Yet its clear resemblance to the other full-size Pontiacs caused some to consider it a lesser model than the other personal luxury cars. At the same time, the Grand Prix had a much stronger performance image than its competitors.

For 1963, the Grand Prix received revised sheetmetal shared with other full-size Pontiacs, but with its own squared-off roofline with a concave rear window that contrasted with the convertible-like roofline of the 1962 Grand Prix and continued on the 1963 to 1964 Catalina and Bonneville. Other distinctive styling cues found on Grand Prixs of this era included "hidden" taillight lenses and exclusive grillework up front. Inside, Grand Prixs had luxurious interiors featuring all-vinyl bucket seats separated by a center console with a floor shifter, storage compartment, courtesy light and optional tachometer or vacuum gauge. Starting in 1965, the Grand Prix was offered with a no-cost option bench seat with folding armrest as an alternative to the bucket seats and console.

A two-door hardtop was the sole bodystyle available on the Grand Prix for all years except 1967, when a convertible was also offered as a one-year offering.
Posted by classic automotives at 3:07 AM 0 comments