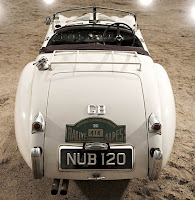 The Jaguar XK120 was a sports car manufactured by Jaguar between 1948 and 1954. It was the first post-war sports car from the marque, succeeding the SS 100 which ended production in 1940 after the start of World War II in Britain.
The Jaguar XK120 was launched at the 1948 London Motor Show as a test bed and show vehicle to highlight the new Jaguar XK engine. The car caused a sensation, which persuaded William Lyons to put it into production as a standard model.

The first cars manufactured in 1948 and 1949 had hand built aluminium bodies on an ash frame. Jaguar built 240 of these alloy bodied cars prior to moving to a more mass production Jaguar XK120 in order to meet the demand for this popular model. With the 1950 model year a production version had a steel pressed body with alloy doors, bonnet, and trunk skin. Other features included torsion bar front suspension, and a removable windscreen.
Power came from a dual overhead cam 3.4 L straight-6 engine, Jaguar's famous XK engine. With an alloy cylinder head and twin side draft SU carburators, the XK engine was very advanced for a mass produced unit, developing 160 bhp with the standard 8:1 compression ratio. A 7:1 low compression version of the engine was also available to cope with low quality fuel. The same basic design of the XK engine was used in 3.8L and 4.2L versions into the late 1980s.

The Jaguar XK120 name referred to the vehicle's impressive 120 mph (193 km/h) top speed - even faster with the windscreen removed - and at the time of its launch it was the world's fastest standard production car. It was available as a coupé (FHC or Fixed Head Coupe, introduced in 1951), convertible (DHC or Drop Head Coupe, 1953), or the original roadster (OTS or Open Two Seater). An Jaguar XK120 FHC can claim the first import win in NASCAR when it won NASCAR's first road race at Linden Airport, New Jersey, June 13th, 1954 with Al Keller at the wheel. Earlier in the year, on 31 January / 1 February, an Jaguar XK120

Race.
The Roadster had a very light weight canvas top and removable side curtains screwed to the doors, which had no external handle - to open them you reached through the screen to pull a cord on the inside. It also had a removeable windscreen, which could be removed so that "aeroscreens" could be fitted. The DHC or Drop Head Coupe had a padded top and roll up windows. Both the FHC and DHC had an elegant wood veneer dash, whereas the roadster's was leather. All models were manufactured with spats to cover the back wheel arch which enhanced the streamlined look, but when optional (from 1951) wire wheels were fitted, the spats had to be removed to make room for the hub spinners. There was also an M version (called SE for Special Equipment in England) which included increased power, stiffer suspension, dual exhaust, and wire wheels.

Email ThisBlogThis!Share to TwitterShare to FacebookShare to Pinterest
Labels: 1948, Jaguar 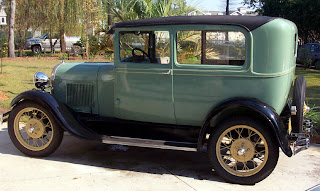 Email ThisBlogThis!Share to TwitterShare to FacebookShare to Pinterest
Labels: 1928, Ford 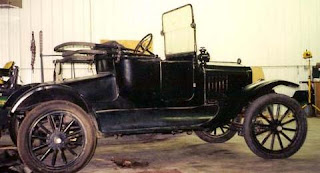