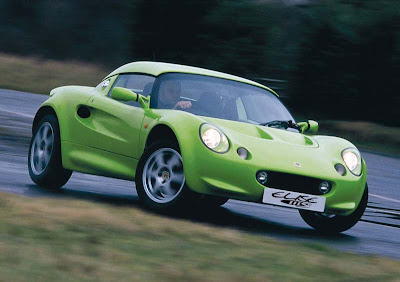 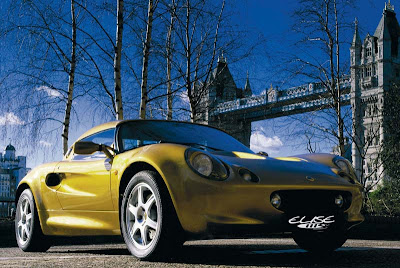 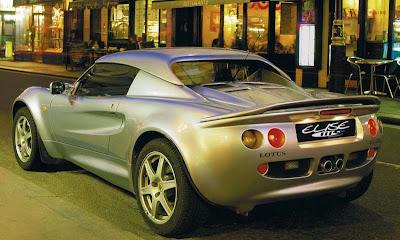 The Lotus Elise is a roadster conceived in early 1994 and released in September 1996 by the English manufacturer Lotus Cars. The car has a hand-finished fiberglass body shell atop its aluminium extrusion and bonded frame that provides a rigid platform for the suspension, while keeping weight and production costs to a minimum. The roadster is capable of speeds up to 240 km/h (150 mph).

The original Elise, called the Series 1 was augmented by a faster edition called the 111S, named after the Lotus type-number of the Elise — M111. The 111S was introduced in early 1999 and contained a VVC Rover K-Series engine with a modified head and VVT type technology producing a declared 143 bhp (107 kW) rather than the standard Rover 1.8 L K-series 118 bhp (88 kW) unit, along with a closer ratio gearbox and lower ratio final drive. It also had more padding in the seats. The 111S also received some cosmetic changes including: headlamp covers, rear spoiler, cross drilled brake discs, alloy window winders and a new 6 spoke road wheel design.
Posted by classic automotives at 3:54 AM 0 comments

Email ThisBlogThis!Share to TwitterShare to FacebookShare to Pinterest
Labels: 1999, Lotus

The design philosophy of Lotus is "Performance through light weight", a philosophy first adopted by the founder of Lotus, Colin Chapman. The motto drives Lotus to obtain very high performance with lightweight cars in spite of their relatively modest power outputs, with a strong emphasis on driving purity and dynamics.

The result is a sports car that in production form in 1996 weighed in at just 720 kg (1,587 lb). Compare this to a Porsche Boxster which is also considered to be an extremely lightweight sports car but weighs nearly twice as much: 1,250 kg (2,756 lb).

The Lotus Elise's acceleration (0-60mph in 5.8 seconds), braking, cornering, and fuel consumption (all of which are improved by reductions in a car's weight) were astonishing for an engine put out a relatively modest 120 bhp (89 kW), compared to the 201 bhp (149 kW) produced by the 1997 Porsche Boxster.

Though high-tech, it represented affordable cost of ownership for sports car lovers on a budget who still wanted performance and looks.

Besides the "standard" higher-performance variants listed below, Lotus also released some limited edition models such as Sport 135 (1998/9) with approx 145 bhp (108 kW), Sport 160 (2000) with 150-160 bhp (112-119 kW) and Sport 190 (190 bhp / 142 kW). These were more competent on track with sports suspension, wheels and tyres, seats according to model. There were other special editions which were basically cosmetic treatments such as the 50th Anniversary Edition (green/gold) celebrating 50 years of Lotus cars, the Type 49 ("Gold Leaf" red and white two-tone), and Type 72 ("JPS" black/gold) to recall their successful Grand Prix car type numbers.
Posted by classic automotives at 3:49 AM 0 comments

Email ThisBlogThis!Share to TwitterShare to FacebookShare to Pinterest
Labels: 1996, Lotus

DaimlerChrysler attempted to buy the Rolls-Royce/Bentley marque when Vickers offered the company up for sale. When this attempt failed (they were outbid by BMW and Volkswagen respectively) they introduced the Maybach as a direct challenger in 2002. Both models are variants of the same ultra-luxurious automobile. The model numbers reflect the respective lengths of the automobiles in decimetres; the 57 is more likely to be owner-driven while the longer 62 is designed with a chauffeur in mind. The engine is a Mercedes-sourced 5.5-liter twin-turbo V12, generating 550 hp. The prices range from US$305,000 to $357,000 (£240,000 to £250,000)—priced to directly compete with top-of-the-line Bentley and Rolls-Royce automobiles.

As of 2004, only 600 units had been sold. DaimlerChrysler projects that they may sell less than the 1,000 units expected. Just 152 Maybachs were sold in the United States in 2005, with worldwide production down to 300 units.

Posted by classic automotives at 3:47 AM 0 comments