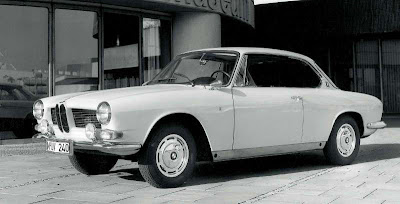 Email ThisBlogThis!Share to TwitterShare to FacebookShare to Pinterest
Labels: 1962, BMW 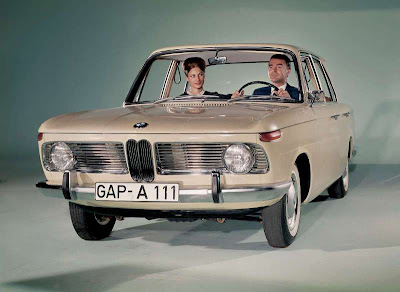 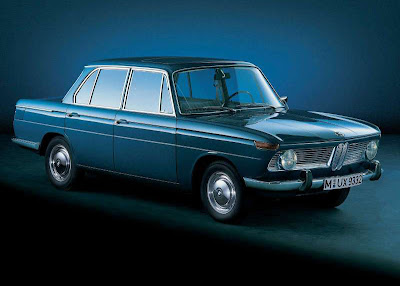 The sedan models (with numbers ending in "0") were replaced by the larger BMW 5 Series in 1972. The '02 series is not part of the New Class. The upscale 2000C and 2000CS coupes were replaced by the six-cylinder BMW E9 coupes, introduced in 1969 with the 2800CS.
Although they shared mechanicals such as engines, gearboxes, and differentials, the four-door New Class models shared little else in terms of parts and design with the two-door models.

Email ThisBlogThis!Share to TwitterShare to FacebookShare to Pinterest
Labels: 1962, BMW

The BMW 507 was a roadster produced by BMW from 1956 to 1959. It is thought by many to be one of the most beautiful automobiles ever produced.

Development
The BMW 507 was the brainchild of BMW importer Max Hoffman, who in 1954 persuaded the BMW management to produce a roadster version of the BMW 502 that could compete with Jaguar and Mercedes-Benz sports cars. Hoffman pushed for designer Count Albrecht von Goertz, who also designed the contemporary BMW 503, as the designer, over existing designs by Ernst Loof, whose sketches Hoffman felt were not commercially viable. Goertz was hired by BMW in November 1954. BMW engineer Fritz Friedler was assigned to design the mechanical package, using existing components wherever possible.

Intended to revive BMW's sporting image, the 507 instead took BMW to the edge of bankruptcy -- the company's losses for 1959 were DM 15 million. The company lost money on each 507 built, and production was terminated early in 1959. Only 252 were built, plus two prototypes. Fortunately for the company, an infusion of capital from Herbert Quandt and the launch of new, cheaper models (the BMW 700, Isetta and eventually the 'New Class' 1500) helped the company recover.

The 507 prototype remains a milestone model for its attractive styling, which attracted some famous buyers. American icon Elvis Presley, then with the US Army in Germany, was the most noteworthy 507 purchaser, buying a white colored model in 1959 for US$3,500, a fortune at the time.

Front suspension was parallel double wishbones, with torsion bar springs and an anti-roll bar. Rear suspension had a live axle, also sprung by torsion bars, and located by a Panhard rod and a central, transverse A-arm to control acceleration and braking forces. Brakes were Alfin drum brakes of 284.5 mm (11.2 in) diameter, and power brakes were optional. Late-model 507s had front disc brakes.