The Eldorado model was part of the Cadillac line from 1953 to 2002. The Cadillac Eldorado was the longest running American personal luxury car as it was the only one sold after the 1998 model year. Its main competitors included the Mark Series and the lower-priced Buick Riviera. The name Eldorado was derived from the Spanish words "el dorado", the "gilded one"; the name was given originally to the legendary chief or "cacique" of a S. American Indian tribe. Legend has it that his followers would sprinkle his body with gold dust on ceremonial occasions and he would wash it off again by diving into a lake. The name more frequently refers to a legendary city of fabulous riches, somewhere in S. America, that inspired many European expeditions, including one to the Orinoco by England's Sir Walter Raleigh.

History
The name was proposed for a special show car built in 1952 to mark Cadillac's Golden Anniversary; it was the result of an in-house competition won by Mary-Ann Zukosky (married name = Marini), a secretary in the company's merchandising department. Another source, Palm Springs Life magazine, attributes the name to a resort destination in California's Coachella Valley that was a favorite of General Motors executives, the Eldorado Country Club. In any case, the name was adopted by the company for a new, limited-edition convertible that was added to the line in 1953.

A different Eldorado Brougham was sold for 1959 and 1960. These cars were not quite so extravagantly styled but were very unusual pieces in themselves. Priced at $13,075, they cost $1 more, each, than their older siblings. The design was 100% Cadillac but the company contracted out the assembly to Pinin Farina of Italy, with whom the division has had a long-running relationship, and these Eldorados were essentially hand-built in Italy. Their discreet, narrow taillights, nicely integrated into modest tailfins, contrasted sharply with the "rocketship" taillights and massive fins of the standard 1959 Cadillacs and were an indication of where Caddy styling would go in the next few years. However, build quality was not nearly to the standard of the Detroit hand-built 1957–1958s, and the 1959–1960 Broughams are less desirable, it seems, than the 1st generation Broughams, although their value and collectibility remain high.

The last Eldorado Seville was built in 1960. After that, the Eldorado convertible became essentially a trim version of the standard Cadillac convertible. With the end of the importation of the Italian-built Eldorados in 1960, the name entered something of a fallow period.
Posted by classic automotives at 1:12 AM 0 comments

Email ThisBlogThis!Share to TwitterShare to FacebookShare to Pinterest
Labels: 1959, Cadillac 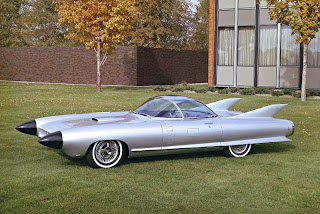 Cadillac Cyclone Concept, 1959
Posted by classic automotives at 1:09 AM 0 comments

Email ThisBlogThis!Share to TwitterShare to FacebookShare to Pinterest
Labels: 1959, Cadillac

The G35 is based on the Nissan FM platform shared with the Nissan 350Z sports car and Infiniti FX sport utility vehicle. The G35 was Motor Trend's Car of the Year for 2003 and has been well-received by both the media and customers as a viable alternative to more expensive luxury cars. The G35 was also nominated for the North American Car of the Year award that year and was on Car and Driver magazine's Ten Best list for 2003 and 2004.

Sporting the ubiquitous (and esteemed) VQ35DE engine, the Infiniti G35 uses a front-midship engine, rear-wheel drive layout (all-wheel drive is available for the G35x sedan) to achieve a 52/48 weight distribution (52% front/48% rear) . Both body styles are available with either a 5-speed automatic or 6-speed manual transmission, although the automatic is the only transmission available for the AWD sedan. The all-wheel drive model is designated the G35x and uses an Aisin-Warner intelligent AWD system that shifts power to the wheels with the most grip.
Both 03 & 04 6MT come standard with Brembo Brakes and the Performance Tire and Wheel Package. On the 2005 coupes, there were three new colors, 'Athens Blue', 'Lakeshore Slate' and 'Serengeti Sand', replacing 'Twilight Blue', Caribbean Blue, and 'Desert Platinum'. Also, Willow Cloth was removed and Stone interior was available. For the 2005 models, there were sportier gauges and better interior trim and knobs. Genuine Aluminum trim replaces "tinted" interior trim. Also, rosewood trim is available as a package on the 2005 models. The Brembo Brakes were removed for the 05 & 06 models. Instead, Sport-Tuned Suspension Package was standard on all 6MT models. The 2006 models received minor updates. On the exterior there were new headlights, taillights, spoiler, and front bumper. Bluetooth capability was added to the interior, for hands-free phone use. Rear active steering was also an option for the '06 5AT.

The G35's competitors include the Acura TL, Audi A4, BMW 3-Series, Cadillac CTS, Lexus IS, Mercedes-Benz C-Class, and Volvo S60.
Posted by classic automotives at 1:07 AM 0 comments 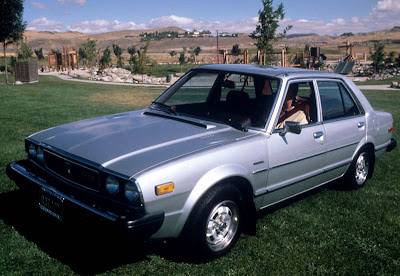 The Honda Accord is an automobile manufactured by Honda. The Accord was introduced in 1976 as a compact hatchback, with styling similar to an upsized contemporary Honda Civic. A four-door sedan was debuted in 1977.

First generation (1976–1981)
The first generation Honda Accord was launched in 1976 as a two-door hatchback with 68 horsepower, a 93.7-inch wheelbase, and a weight of about 2,000 pounds. It was larger than the tiny Civic at 162 inches long. The Accord sold well, due to its moderate size and great fuel economy. In 1978 an LX version of the coupe was added which came with air conditioning. In 1979 a four-door sedan was added to the lineup, and horsepower went to 72 horsepower. In 1980 the optional two-speed automatic of previous years became a three-speed automatic. In 1981 an SE model was added for the first time, with leather seats.

Second generation (1982–1985)
In 1982, the Accord was redesigned, and it became the best-selling Japanese nameplate in the US, holding that position for 15 years. Modernizing both the interior and exterior, the second generation Accord was mechanically very similar to the original, using the same 75hp, 1751cc EK1 CVCC engine. Fuel economy was increased by nearly 15%. Vastly improved quality control, however, made this one of the most reliable cars on the US market, a position it still holds today.

By 1984 Accords sold in the eastern US were being produced at the new Marysville, Ohio plant with quality considered equal to those produced in Japan. The body was restyled with a slightly downward beveled nose, and the slightly more powerful ES2 1829cc CVCC powerplant was used, bringing 86hp. The LX offered most features typical of a mid-price Buick or Chrysler such as velour upholstery, cassette stereo, air conditioning, power brakes & steering, power windows, power locks, powered sunroof and roof pillar antenna, along with thick black belt moldings and integrated bumpers. Flush plastic mock-alloy wheels covers instead of caps on steel wheels that resembled the trend-setting Audi 5000. Supplies were tight, as in the Eastern states, the wait was months for a graphite gray sedan, a then-popular color. These models are still common on US roads today.
In 1985 the luxury SE-i was added, which had leather seating, bronze tinted glass, and 14" alloy wheels. A fuel injected, 110hp non-cvcc A2OA1 made its debut. This 12 valve, 1955cc engine was the first non-CVCC engine used in an Accord. The same basic engine was used by Honda until 1989.

Third generation (1986–1989)
The third generation Accord was introduced in Japan and Europe in 1985 and the rest of the world in 1986. The Accord had a very striking shape, and looked more akin to a sports car than a conventional 3-box sedan. It bore a resemblance to the second and third generation Prelude. One notable feature was the flip-up headlights, extremely unusual for a sedan. A fixed headlight version appeared in 1987 for European and Japanese markets. The fixed headlight version also had a different tailight cluster.

The 3rd Generation's suspension was a double wishbone setup, which was derived from Honda's work in Formula one. While this setup was more expensive than competitors' Macpherson Strut systems, it provided better stability and sharper handling. All 86-89 Accords Have front and rear stabilizer bars. The Accord's brakes were either Large 4-wheel discs with twin-piston calipers ( as in the JDM Si model), smaller 4-wheel discs with single piston calipers, or a Front Disc/Rear Drum system. ABS was also available as an option on the 4-wheel disc brake models, although this was never offered in North American versions of the car. Base model Accords rode on 13-inch steel wheels with hubcaps, with more expensive models having the option of 14-inch alloy wheels.

The most recent addition to Honda's museum of used cars, a 1989, third generation, Honda Accord SEI owned by U.S. resident Jason Wong has survived through numerous crashes caused by blatantly bad driving, and has over 400,000 miles on it.
Posted by classic automotives at 1:06 AM 0 comments