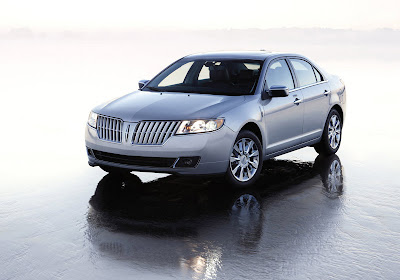 CTA uses the BLIS radar sensors to alert the driver of approaching traffic while in reverse and backing out of a parking spot. The CTA tracks up to 65 feet on either side of the vehicle and warns the driver through both audible and visual alerts.

The new MKZ also features Lincoln signature design elements, including the split-wing grille and thinner wraparound head lamps for a wider, sportier look. Its chamfered front fascia also shares a family resemblance with the Lincoln MKS, with a sculpted hood and ridges flowing into the A-pillar. In the rear, the Lincoln MKZ features a new decklid with wider LED taillamps accentuating the width of the car and separated by the Lincoln star.

The world-renowned luxury leather from Scotland, pioneered on the classic Lincoln Continental Mark II and used on the MKS, wraps the MKZ seats. The Lincoln MKZ leather is unembossed, allowing the natural beauty and character of the grain to shine through.

The leather is milled for up to 12 hours to ensure a buttery soft hand, and Bridge of Weir uses a chromium-free tanning process, which makes it easier to recycle.

Additions or improvements to the 2010 Lincoln MKZ interior:

Technology and information at your fingertips
The new Lincoln MKZ is more than just a pretty face and striking new interior. New technology features help Lincoln's new mid-size sedan stand out, too. They:

Other features for the 2010 Lincoln MKZ:
Read more »
Posted by classic automotives at 1:43 AM 0 comments